Pope Francis' visit to the Holy Land is intended to lift the spirits of the downtrodden. 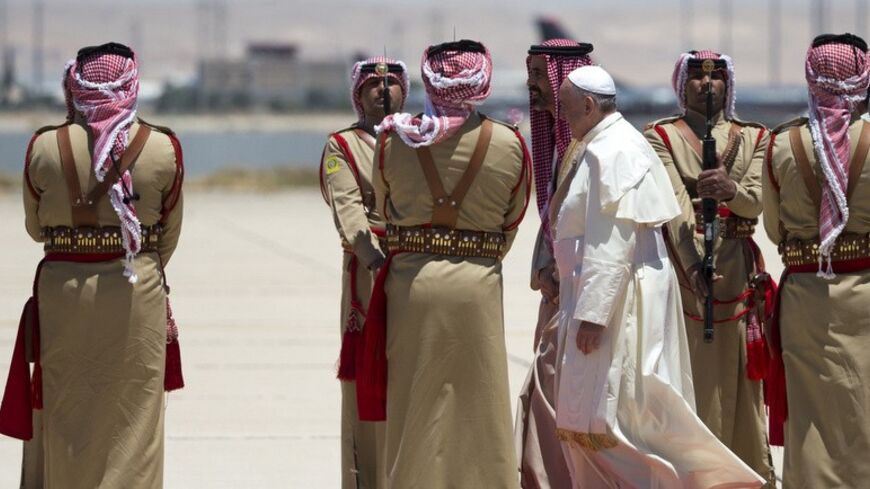 Pope Francis reviews the honor guard upon his arrival at Queen Alia International Airport in Amman, Jordan, at the start of an intense three-day trip to the Middle East May 24, 2014. - REUTERS/Andrew Medichini

The growing interest in Pope Francis’ visit to the Holy Land is, in part, due to the hopes that he will enhance expectations. Owing to the homilies he frequently renders, expectations are high. While the visit is a religious pilgrimage, he undoubtedly — in his characteristic subtle and provocative manner — seeks to heal residual wounds and affirm the priority of just resolutions to ongoing crises.

His direct flight from Amman to Bethlehem represents both the priority of visiting the birthplace of Jesus and avoiding flying through Israel as a symbolic lift to the Palestinians.

To Pope Francis, this move is a gesture toward the downtrodden, whose national and social rights are denied, but it is also a signal to the world that he is visiting the birthplace of Jesus. Pope Francis is communicating the morality of his strategic assessments by sending subtle signals that define his ethical commitments to [upholding] what is right and wrong.

The gesture of arriving first in Bethlehem was a clear recognition of the November 2012 UN General Assembly resolution that upgraded Palestine’s status as the State of Palestine.

The basic thrust of his mission is to legitimize diversity among religions, but also to avoid the separation that can come with pluralism.

Pope Francis' attempt to promote religious coexistence as a prelude to mutual discovery has made him not only a meaningful historical figure, but a spiritual leader — one who seeks to heal the physical wounds of poverty and conflict among people, and diffuse their causes by enhancing hope.

As head of the Vatican state, Pope Francis will undertake official visits to Israel, but he will also visit Palestinian refugee camps, as well as the Syrian camps in Jordan, signaling to the refugees the Vatican's support for their right of return to their homelands.

During this pilgrimage to the Holy Land, Pope Francis is planting the seeds of a just peace where justice has long eluded the various "road maps" and "peace talks." It is expected that the terms associated with the endless and redundant "peace processes" can now take a clue from Pope Francis' pilgrimage — to render peace no longer a "process," but a reality.