Francis' visit to the country next month will mark the first time a pope has visited Iraq. 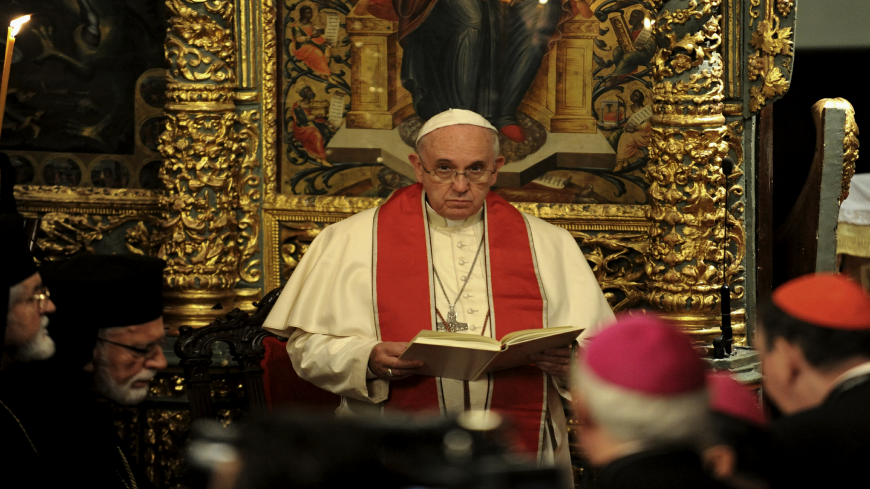 Pope Francis attends an Ecumenical Prayer in the Patriarchal Church of Saint George in Istanbul on Nov. 29, 2014. - Gokhan Tan/Getty Images

Pope Francis says he is determined to travel to Iraq next month despite coronavirus limitations in what will be the first-ever papal visit to the Middle East country.

Even if social distancing requirements prevent Iraqi Christians from seeing him in person, “They will see that the pope is there in their country,” Francis told Catholic News Service.

“I am the pastor of people who are suffering,” he said, adding that he would consider taking a regular commercial flight to Iraq.

The 84-year-old pope’s trip to Iraq will mark the first time he's traveled abroad since visiting Japan and Thailand in November 2019. Francis, who was forced to cancel his other trips amid the pandemic, will "take into consideration the evolution of the worldwide health emergency” upon traveling to Iraq, his office said.

During his March 5-8 trip, Francis is expected to visit the Iraqi capital, Baghdad; the second-largest city, Mosul; and Ur, the southern city named in the Bible as the birthplace of Abraham. He is also scheduled to meet with Iraq's top Shiite cleric, Grand Ayatollah Ali al-Sistani, in the southern city of Najaf and will make stops in the Iraqi Kurdish capital, Erbil, and the Christian town of Qaraqosh.

The Iraqi Foreign Ministry has described Francis’ trip as “a message of peace to Iraq and the whole region.”

Following the sectarian violence unleashed after the 2003 US-led invasion of Iraq, the number of Christians has plummeted from roughly 1.5 million to fewer than 400,000. The shrinking Christian population faces ongoing threats from Sunni militant groups, including the Islamic State (IS), which have vandalized churches and emptied out Christian settlements across the Ninevah Plains.

No modern pope has ever traveled to Iraq. In 1999, preparations were underway for Pope John Paul II to visit as part of a Middle East pilgrimage, but the trip was scrapped after Saddam Hussein’s government said it couldn’t ensure the pontiff’s safety. Francis told CNS that he doesn’t want Iraq’s Christians to be disappointed for the second time.

Since becoming pope in 2013, Francis has made interfaith dialogue and religious freedom a focus. He’s made papal visits to several Muslim-majority countries, including Jordan, Turkey, Egypt and the United Arab Emirates.