Francis and Grand Ayatollah Ali al-Sistani are scheduled to meet in the Iraqi city of Najaf during the first papal visit to the country. 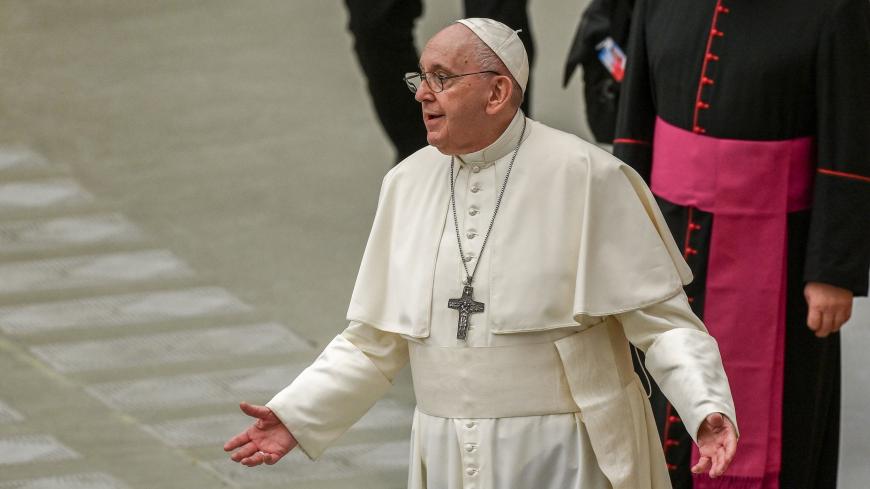 Pope Francis reacts during an audience to deliver his Christmas greetings to the employees of the Vatican, on Dec. 21, 2020, at Paul-VI hall at the Vatican. Francis is to visit Iraq in March. - VINCENZO PINTO/AFP via Getty Images

Pope Francis will meet with Iraq's leading Shiite cleric, Grand Ayatollah Ali al-Sistani, during his upcoming visit to the Middle East country — the first ever by a pope, an Iraqi Catholic official told AFP.

Louis Sako, the patriarch of the Chaldean Catholic Church in Iraq, told the agency that the pope and Sistani are expected to have a “private visit ... without formalities” in the southern city of Najaf. The 90-year-old Sistani is the spiritual leader of Iraq’s Shiite majority and is a highly revered figure for millions of Muslims around the world.

Sako said he hoped the two men would sign the “Document on Human Fraternity,” a text calling for an end to religious-based hatred and extremism. Francis signed the document with Sheikh Ahmed al-Tayeb, the grand imam of Egypt’s Al-Azhar mosque, during a visit to Abu Dhabi in 2019.

Francis’ historic visit to Iraq will mark his first international trip since before the pandemic. His itinerary for March 5-8 includes visits to the capital, Baghdad, the second-largest Iraqi city, Mosul, and Ur, the southern city named in the Bible as the birthplace of Abraham. The pope will also hold mass in Baghdad and the northern Kurdish city of Erbil, Sako said

Iraq’s ancient Christian population has dwindled since the US-led invasion of the country in 2003 and the sectarian violence that followed. Sunni militant groups, including the Islamic State (IS), have vandalized churches and emptied out Christian settlements across the Ninevah Plains.

Fewer than 400,000 Christians remain in the country today, down from roughly 1.5 million two decades ago. In addition to the Chaldean Catholic Church, which is Iraq’s largest Christian denomination, the country is also home to the Syriac Catholic Church and other Eastern Rite churches.

Francis, who has previously condemned the “murderous indifference” toward Christians in the Middle East, has also visited several Muslim-majority countries since becoming pope, including Jordan, Turkey, Egypt and the United Arab Emirates.

The Iraqi Foreign Ministry has described the upcoming papal visit as “ a message of peace to Iraq and the whole region.”

Although victory was declared over IS three years ago, remnants of the terrorist group still pose a threat in parts of Iraq. Last week, Francis denounced the IS-claimed Jan. 21 suicide bombings that killed dozens in Baghdad as a “senseless act of brutality” and urged the country “to work to overcome violence with fraternity, solidarity and peace.”