In the first-ever papal visit to the country, Pope Francis plans to highlight the plight of Iraq's dwindling Christian population and promote interfaith dialogue. 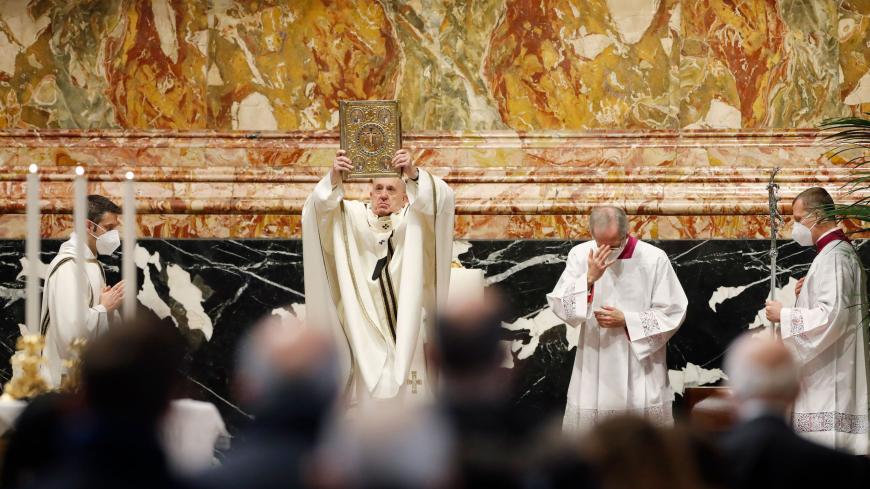 Pope Francis holds the Holy Book of Prayers as he celebrates Mass for the Epiphany on Jan. 6, 2021 at St. Peter's Basilica in the Vatican. - REMO CASILLI/AFP via Getty Images

The Vatican released the itinerary of Pope Francis’ March visit to Iraq on Monday. The schedule, packed with events and meetings with religious and political figures across the country, reveals a trip with two missions: to highlight the plight of the country’s dwindling Christian population and to promote interfaith dialogue.

The March 5-8 trip will be Francis’ first foreign outing in 16 months due to the coronavirus pandemic. His touchdown at Baghdad International Airport comes amid an uptick of new coronavirus cases in the country, growing influence of armed groups and a pair of bombings in Baghdad claimed by the Islamic State. The Catholic leader says now is the time to extend a visit to some of the oldest Christian communities in the world.

“In our time, interreligious dialogue is an important component of the encounter between peoples and cultures,” Francis told ambassadors of the Holy See, the government of the Catholic Church, on Monday. “When it is viewed not in terms of compromising our own identity but as an occasion for mutual understanding and enrichment, dialogue can become an opportunity for religious leaders and the followers of different confessions, and can support the responsible efforts of political leaders to promote the common good.”

Two years ago, Francis announced plans to visit Iraq by 2020, but the plan was halted as the coronavirus began to spread.

So when Francis again announced in December of last year that he would make the trip in 2021, groups were initially skeptical as the pandemic continues to grip the country and the state faces glaring security issues. The Iraqi Health Ministry reported 1,660 new coronavirus cases on Saturday.

But the pope believes there is now a window of opportunity to move ahead with the trip. Recent arrest warrants issued for armed groups operating outside the government’s control have offered small signs of progress in curbing this influence.

The country will receive thousands of the Pfizer-BioNTech vaccine as well as Chinese Sinovac vaccine this month. Francis was vaccinated against the coronavirus in January. His top aide, Vatican Secretary of State Cardinal Pietro Parolin, said the pope is eager to make the trip. It will be the first-ever papal visit to the country.

Francis will land in Baghdad on March 5 before traveling to Najaf, Nasiriya, Erbil and Mosul to meet with Iraqi President Barham Salih, Grand Ayatollah Sayyid Ali-Husaymi Al-Sistani in Najaf as well as local bishops and priests. He will celebrate mass at the Chaldean Cathedral of Saint Joseph in Baghdad.

Since the 2003 US-led invasion of Iraq, the number of Christians in the country has plummeted from roughly 1.5 million to fewer than 400,000. Francis previously condemned a “murderous indifference” toward Christians in the Middle East.

“Indifference kills, and we desire to lift up our voices in opposition to this murderous indifference,” he said at a service in July 2018. “For the Middle East today is weeping, suffering and silent as others trample upon those lands in search of power or riches.”

In a conversation with the Chaldean Catholic patriarch in August, Prime Minister Mustafa al-Kadhimi urged Iraqi Christians to return.

“Iraq is a country for everyone and Christians are the original children of the country,” Kadhimi said. “We are serious about providing assistance to our Christian families and solving their problems. We are glad that Christians will return to Iraq and contribute to its reconstruction. Iraqis of all sects are yearning for a new Iraq that believes in peace and rejects violence.”

But the Christians who have remained in Iraq continue to face threats from militant groups and complain of a lack of protective measures by both Baghdad and Erbil.

Many have criticized Kadhimi's remarks as unrealistic and demanded the federal government first rein in the armed militias that continue to threaten their safety. There is little faith that either Kurdish peshmerga or Iraqi security forces can keep these communities safe, Suzan Younan, an Assyrian in Erbil, told Al-Monitor.

“When the vulnerable communities witness their history being stolen, destroyed and sold in their areas of origin, that fear increases dramatically,” she said.

Yet the patriarch, Cardinal Louis Raphael I Sako, expressed the church's support for the premier's actions "towards acheiving security and stability," adding that "Christians are proud of their Iraqi identity, and they feel more reassured" by the government's handling of the issue.