The first-ever papal visit to Iraq starts as Pope Francis lands in Baghdad. 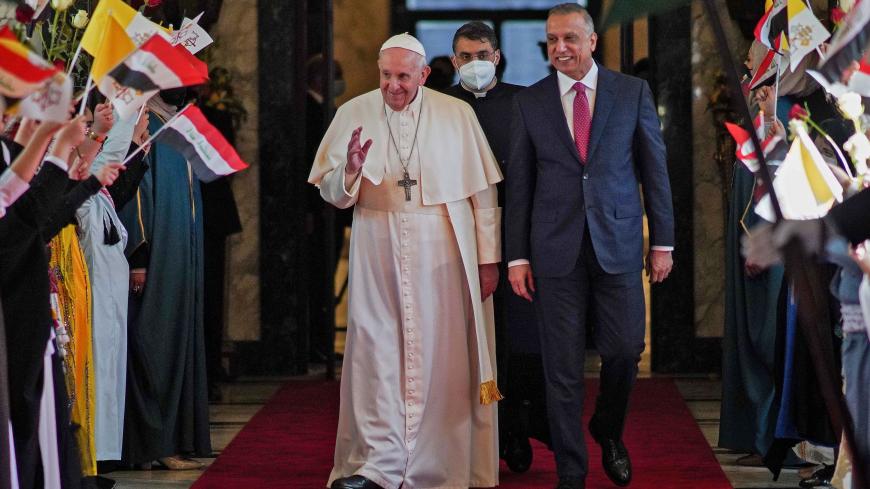 “I came as a pilgrim for the peace and a repentant asking for forgiveness,” Pope Francis told Iraqi Prime Minister Mustafa al-Kadhimi after arriving in Baghdad on March 5 on the first-ever papal trip to Iraq.

Francis described his trip as “long-awaited and desired visit” to Iraq, the “cradle of civilization closely linked through the Patriarch Abraham and a number of the prophets to the history of salvation and to the great religious traditions of Judaism, Christianity and Islam.”

Hundreds of Iraqis began lining up in the early morning to welcome the pope along the Airport Highway, where they held Iraqi and Vatican flags when his vehicle went by in the afternoon. The pontiff's vehicle slowed, and its window was rolled down so Francis could wave to the throng the entire length of the road.

In the presence of Iraq's president, prime minister, the head of the judiciary system, the parliament speaker and other Iraqi political and social leaders, Francis called upon “governmental leaders and diplomats … to foster this spirit of fraternal solidarity. It is necessary, but not sufficient, to combat the scourge of corruption, misuse of power and disregard for law.”

He called for “justice and the fostering of honesty, transparency and the strengthening of the institutions responsible in this regard,” adding, “In this way, stability within society grows and a healthy politics arises, able to offer to all, especially the young of whom there are so many in this country, sure hope for a better future.”

The pope's visit was an opportunity for Iraqis to unite during a difficult time where Iraq is suffering from multiple crises. Iraqi leaders from different political orientations gathered in welcoming the pope at the Baghdad Palace in the heart of the Green Zone; these included leaders of Islamic parties and the Popular Mobilization Units leaders and secular politicians from various groupings.

“Iraq has suffered the disastrous effects of wars, the scourge of terrorism and sectarian conflicts often grounded in a fundamentalism,” Francis said. “Here, among so many who have suffered, my thoughts turn to the Yazidis, innocent victims of senseless and brutal atrocities, persecuted and killed for their religion, and whose very identity and survival was put at risk.”

Iraq's parliament this week approved the Yazidi female survivors law, which is to provide support to survivors of Islamic State oppression. Last year's Sinjar agreement signed by the central government and the Kurdistan Regional Government provides a pathway toward stability in the Yazidi homeland, in three stages: security, administration and reconstruction.

Following the official meeting with Iraqi leaders, the pope went to Our Lady of Salvation Church, which was the scene of a 2010 massacre perpetrated by an al-Qaeda affiliate that killed 58 worshippers, priests and security forces and injured 78 others.

Cardinal Louis Raphael Sako, the patriarch of Babylon and the head of Chaldean Catholic Church, told the pope his visit was a great support to all Iraqis, highlighting the historic meeting the pope will hold tomorrow in Najaf with the top Shiite cleric in Iraq, Ayatollah Ali al-Sistani.

“The apostolic mission should not stop in these lands in which God blessed you,” Francis said to the Iraqi Christians in the church. “We know that it is easy for a person to be seized by frustration, but the kingdom of God, the kingdom of justice, accompanies you on your journey.”

The pope thanked the Christians for staying in their homeland among other people who have suffered from wars and persecution and called on all believers to continue this mission.

Iraq had lost the majority of its Christian population, among other minorities, during the last few decades due to continuing wars and security crises — most recently the rise of Islamic State, which caused many to flee Iraq or to be displaced internally.

Francis wrote a letter to the Christians of the Middle East in 2014, demanding they resist the pressures pushing them to leave their countries.

“Dear Christian brothers and sisters of the Middle East, you have an enormous responsibility and in meeting it you are not alone. … How precious your presence and your mission are in the land which the Lord has blessed,” the pope said in his letter.

“I do hope to have the chance to come to you in person and to visit and to comfort you,” he said.

Nearly seven years later, Francis has fulfilled his promise, visiting one of the first early Christian communities in the region.

However, the first-ever papal trip to Iraq means much more than expressing spiritual support to Christians.

The pope's visit to Iraq is a significant initiative empowering the rise of moderation and civil movements in line with Sistani's call for a civil state and popular demonstrations that began in 2019 demanding a national and secular state after decades of dictatorship and extremism.