The pope will land in Iraq tomorrow for a three-day pilgrimage. 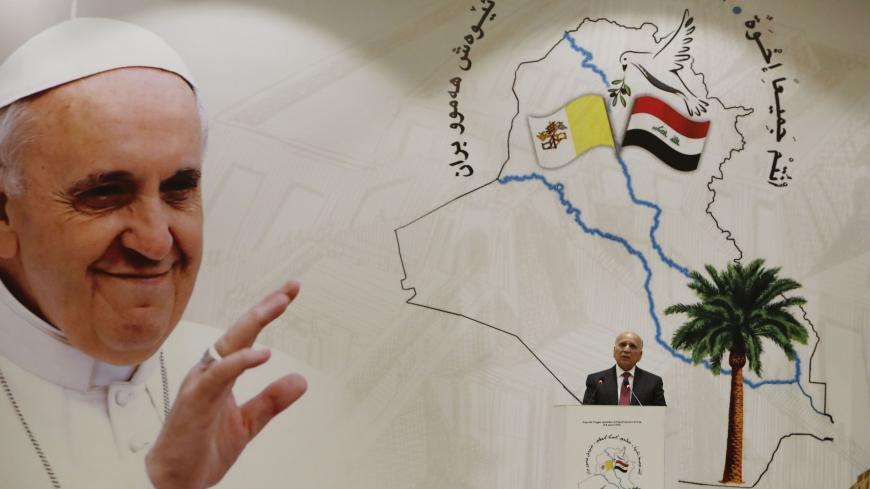 Iraqi Foreign Minister Fuad Hussein holds a press conference at the Babylon Hotel in the capital Baghdad, on March 4, 2021, on the eve of the first papal visit to Iraq. - SABAH ARAR/AFP via Getty Images

For the first time in history, the head of the Catholic Church and sovereign of the Vatican City State, Pope Francis, will visit Iraq March 5-8.

“Tomorrow I will go to Iraq for a three-day pilgrimage,” the pope tweeted today. “I have long wanted to meet those people who have suffered so much.” Iraqis have also been waiting a long time for this moment.

The former pope, St. John Paul II, had expressed a wish to visit Iraq in 2000 and carry a message of unity among Abrahamic religions on a trip from southern Iraq to the Holy Land.

"If it be God's will, I would like to go to Ur of the Chaldees, the present-day Tell el-Muqayyar in southern Iraq, the city where, according to the biblical account, Abraham heard the word of the Lord," the late pope said.

The trip never took place at the time, during the dictatorship of Saddam Hussein. Iraq has remained the only place of strong biblical significance that has not been visited by a pope.

Pope Francis will land at Baghdad's airport tomorrow afternoon and be welcomed by Iraqi Prime Minister Mustafa al-Kadhimi. They will exchange gifts and discuss Iraq's progress toward a stable state and its unique multicultural society.

The pope will visit several places in Iraq, promoting tolerance and coexistence in the birthplace of Abraham and the historical home of the three main Abrahamic religions — Judaism, Christianity and Islam — in addition to offshoots and affiliates like Sabianism and Bahaism.

The pope expressed hope to take another step forward “in fraternity amongst believers” together with Iraqi religious leaders.

“I ask you to accompany this apostolic journey with your prayers, so that it may unfold in the best possible way and bear the hoped-for fruits," he said.

Baghdad and other Iraqi cities are covered with posters and decorations for the visit.

After meeting Iraq's president and other Iraqi political and civil society leaders Friday evening, the pope will visit the church of Our Lady of Salvation to meet Iraqi religious leaders of different denominations.

The church had witnessed a horrible massacre in 2010, when six suicide jihadists attacked the church during Sunday evening Mass, killing 58 worshipers and injuring other dozens.

On Saturday morning he will travel to Najaf, the heart of the Shiite world, where he will meet the highest Shiite authority, Ayatollah Ali Sistani. Then he will travel south to visit Ur, Abraham’s homeland. He will be accompanied by top religious authorities from different Iraqi religions and denominations.

Mosul will be another stop. The city was one of the main Christian centers before the Islamic State took over the area in 2014 and expelled Christians and confiscated their properties. A small number of them have returned, but most remain cautious out of concern for a lack of security and services.

The visit will be a gesture of support for Iraqi Christians, encouraging them to stay in the home of one of Christianity’s earliest communities.

Now, after the defeat of IS in Iraq and most of the region, the pope's visit will deliver a powerful message not just to Christians but to all nations in the region who have been suffering under extremism and dictatorships.

Iraqi Kurdistan will be the final stop before the pope leaves Iraq Monday morning.

The visit is a great opportunity not just for Iraqi government but also for religious institutions and civil society to invest in promoting tolerance and coexistence in the Middle East.