Pope speaks of interfaith tolerance from ancient city of Ur

The ancient city is the birthplace of the father of the three major monotheistic religions, a fitting backdrop for an interfaith dialogue, Pope Francis said. 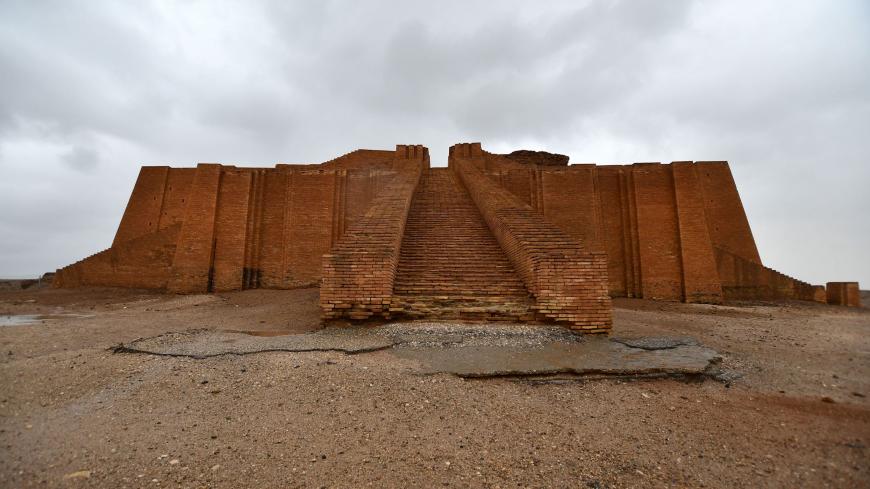 A picture taken on Feb. 6, 2021, shows the Great Ziggurat in the ancient city of Ur, where Abraham is thought to have been born, in southern Iraq's Dhi Qar province. - ASAAD NIAZI/AFP via Getty Images

If the mud bricks and limestone that make up the Great Ziggurat temple in Ur could talk, they may first tell you about one of the world’s early urban centers that emerged more than 6,000 years ago.They may speak of the birth of Abraham, the patriarch of the Christian, Muslim and Jewish faiths. You may even hear a whisper of Assyria or Babylon, the invention of the wheel or the Code of Hammurabi.

And now they may tell of the March 6 visit by Pope Francis, head of the Catholic Church and the sovereign of the Vatican City State, who led prayers alongside leaders of the Muslim, Yazidi and Sanaean faiths. Francis stopped in the ancient city during his historic three-day trip to Iraq March 5-8, the first ever papal visit to the country. His trip sought to uplift Iraq’s remaining Christians, encourage those who left to return and promote a message of interfaith tolerance.

“Today we — Jews, Christians and Muslims, together with our brothers and sisters of other religions — honor our father Abraham by doing as he did: we look up to heaven and we journey on earth,” Francis said.

Located a few hundred miles south of Baghdad, Ur was built by the Sumerians around 3,800 BC. It was initially near the Euphrates, but the river has since shifted. The city grew to feature markets, agricultural villages and important transit routes with other cities.

As the birthplace of the father of the three major monotheistic religions, the site was a fitting backdrop for an interfaith dialogue, Francis said. It brought the leaders of different religions “back to our origins, to the sources of God’s work, to the birth of our religions.”

Before a socially distanced crowd that spoke to the rising number of coronavirus cases in the country, Francis and other leaders urged Iraqis to be hospitable to those of different faiths and to welcome everyone.

The message echoed comments Francis made earlier in the day in a meeting with Iraq’s top Shiite cleric, Grand Ayatollah Ali al-Sistani, in a first-of-its-kind meeting in the holy city of Najaf. The two had a “very positive” meeting that lasted about 45 minutes and “underlined the importance of collaboration,” according to a statement from the Vatican.

The religious authority plays a role in protecting Christians and others who have suffered injustice and harm in the past, a release from Sistani’s office said after the meeting.

Other religious leaders hope that Francis’ trip will prompt more interfaith dialogue into the future.

“I hope this first visit will be followed by other visits and that institutes will be established here for mutual understanding and interchange where students from the Vatican can come to Iraq to study for one or two years and our students can go to Christian institutes,” Mahdi Al-Nasiri, a cleric in Nassriyah, told Al Jazeera’s Simona Foltyn.

Since the 2003 US-led invasion, the Christian population of Iraq, consisting largely of Assyrians, Chaldeans and Syriacs, has dwindled from about 1.5 million to a few hundred thousand today.

The 2014 assault by the Islamic State displaced hundreds of thousands more from their historic homelands as well as destroyed historical sites, manuscripts and artifacts. Those items are more than museum pieces, a representative of the Shlama Foundation, a group that serves the country's Assyrian, Chaldean and Syriac populations, told Al-Monitor. They show the existence of this community and establish ties between it and the land it has called home for millennia.

Chaldean Archbishop of Mosul and Akra Najeeb Michaeel reminded Iraqis that while the Islamic State killed thousands of Yazidis and Christians, they targeted all of humanity and also killed many Muslims.

“Today in Mosul, a majority of the people don’t accept what ISIS was doing,” Michaeel said. “Some of them tell me, ‘Father, we beg your pardon, we are very sorry about what happened to you. It’s not us, they imposed on us their own ideology, which is also against Islam.’”

Following the trip to Ur, Iraqi Prime Minister Mustafa al-Kadhimi declared March 6 as a national day of tolerance and coexistence.

“This dear visit, with all its welcome and national consensus on the success of its noble purposes, represented a bright spot that embodied the essence of our loving, sincere, civilized people who believe in the values of justice and peace,” Kadhimi said.