Iraq has launched a new round of interfaith dialogues in the wake of achievements related to tolerance and the recognition of others. 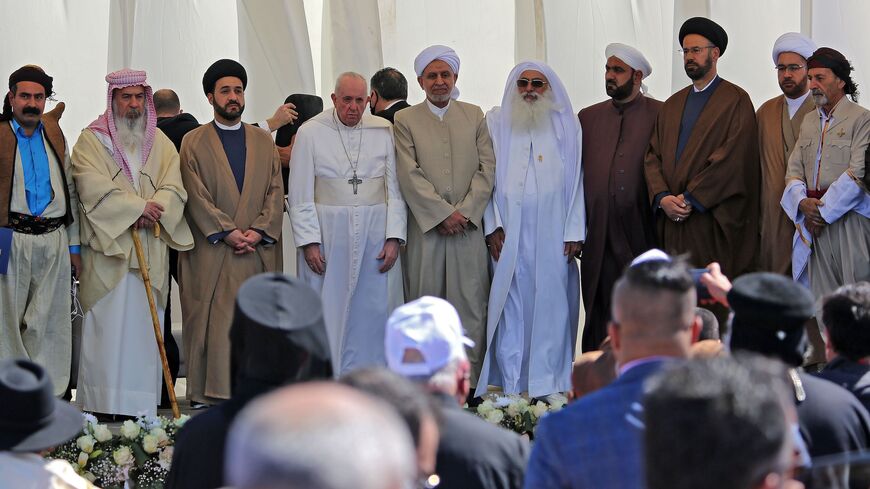 Pope Francis stands with Iraqi religious figures during an interfaith service at the House of Abraham in the ancient city of Ur in southern Iraq's Dhi Qar province, on March 6, 2021. - AHMAD AL-RUBAYE/AFP via Getty Images

The Iraqi Ministry of Foreign Affairs stated Aug. 5 that it has completed preparations for the third Interfaith Dialogue Conference scheduled for October in coordination with the religious endowments offices in Iraq — namely the Shiite, Sunni, Christian, Mandaean and Yazidi endowments.

On Jan. 26, the Ministry of Foreign Affairs said that the upcoming Interfaith Dialogue Conference will be held with the participation of the Pontifical Council in the State of the Vatican City.

In his trip to Iraq last year, Pope Francis called from Baghdad for the stability of peace in the region and the strengthening of interfaith dialogue.

Interfaith dialogue has gained more importance as a result of the conflict with the religious extremist Islamic State (IS) organization, which invaded Iraq between 2014-2017 and left about 6 million people displaced from their places of origin.

On Aug. 8, Undersecretary of the Iraqi Ministry of Foreign Affairs Safia Taleb al-Suhail met with Ambassador of the Vatican City State to Iraq Mitja Leskovar.

Suhail told Al-Monitor, “The Iraqi Ministry of Foreign Affairs, under the auspices of Prime Minister Mustafa al-Kadhimi and the guidance of Foreign Minister Fouad Hussein, will host an international interfaith dialogue forum in the capital, Baghdad, in cooperation and coordination with the Vatican and a number of countries and international institutions with the aim of promoting peace, international cooperation and coexistence, which were among the outcomes of the Baghdad conference last year.”

She said that “a meeting between the endowment offices in Iraq and the Papal Council in the Vatican State, held in its first session in 2013 and the second in 2017, discussed the challenges facing people of religions, and a third meeting has been scheduled for October 2022.”

She noted that “the conference will adopt ‘Proper Education for New Generations: Path to Peace and Comprehensive Development’" as its slogan.

Suhail revealed some of the conference’s agenda items, which aim to “prepare teachers to perform their educational peacemaking mission all the while reviewing school curricula to promote a culture of coexistence.”

Asked about the main parties organizing the conference, Suhail said that these include “the Pontifical Council for Interreligious Dialogue, which is one of the official Vatican dialogue formations, and the Iraqi religious endowment offices, in addition to spiritual leaders from all religions.”

Suhail said that “the Iraqi state is keen to honor its obligations related to the respect of human rights and democracy, as stipulated by the Iraqi Constitution, including the rights of cultural and religious minorities and other basic freedoms. And Iraq is committed to the recommendations and outcomes of the visit of His Holiness the Supreme Pontiff to Iraq.”

He added, “These conferences are usually preceded by preparatory meetings to agree on a specific axis. During the conference, the participants’ visions and papers are submitted, and then a final statement is drawn up to express a common view that leads to rapprochement and deeper participation.”

Ahmed revealed that “the Shiite endowment is taking part in the preparatory phase for the third conference, and the Ministry of Foreign Affairs is handling communication between participants and facilitating the protocol aspects, as there are committees working on clarifying the topics to be discussed during the conference.”

He expects “the results of these meetings to be positive and felt at the national, regional and global levels, given that the challenges our societies face are major, especially for workers in the religious field.”

Ahmed went on to say, “The Shiite endowment is handing these projects with all their details, and it is calling for rapprochement and dialogue to reach common grounds that serve our Western and Eastern societies. There is also keenness on the part of the Iraqi religious institutions to follow the path of the supreme leader, Ali al-Sistani, and rely on his directives in dealing with people and societies.”

He believes that “both the Shiite and Sunni endowments are working to build on the many commonalities that they have and restore the national cohesion that the extremist ideology has destroyed in the multi-religious, multi-sectarian and multi-ethnic Iraq, as we are working to turn this diversity into a source of strength for Iraq.”

Abbas Abboud, leader in the State of Law Coalition and former editor-in-chief of Al-Sabah newspaper, told Al-Monitor that “there is no religious conflict in Iraq but a conflict of nationalities and sects,” noting that “Iraq has been since ancient times a country of diverse religious beliefs, as it is home to the oldest churches and various places of worship.”

Abboud added, “Minorities in Iraq are fine compared to other countries, except for when IS invaded Iraqi lands.”

He believes that “the region is in dire need of interfaith dialogue, and Iraq can play a pivotal role in this regard as it is a diverse and tolerant country, and its people are in contact with the Turks, Persians and other nationalities given Iraq’s geographical location, which gives it a leading role in promoting dialogue.”

The year 2013 witnessed the establishment of the Iraqi Council for Interfaith Dialogue, which took it upon itself to set up practical mechanisms to activate interfaith understanding by organizing seminars and guaranteeing effective participation in international conferences to shed light on the danger of extinction that minorities face.

Religious hatred has largely receded in both Iraq and the region in recent years, but there is a need to change the societal culture in a bid to preserve pluralism in Iraq and address this in a legal and social way by enacting new legislation capable of emphasizing equal citizenship and guaranteeing respect for all religions, all the while criminalizing all kinds of discriminatory rhetoric that focuses on hate.