For the first time in history, the pope has visited the Shiite holy city of Najaf and met with top Shiite cleric Ali Sistani. 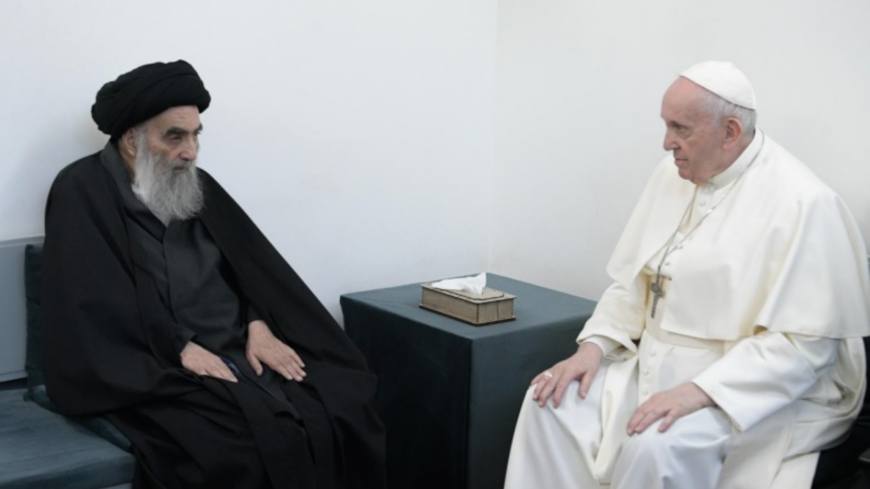 NAJAF, Iraq — On the second day of his visit to Iraq, Pope Francis, the highest authority in the Catholic church and the sovereign of the Vatican City State, flew to Najaf, to hold a historic meeting with the country's top Shiite cleric Ayatollah Ali al-Sistani.

Starting in the early morning of March 6, children lined up on Rasul Street next to Najaf’s Imam Ali Shrine, waving Iraqi and Vatican flags while patiently waiting for the pontiff’s motorcade to arrive.

The pope's motorcade finally pulled onto Rasul street, which ends at the gates of the shrine of Imam Ali, who is not only a highly regarded spiritual figure among all sects of Shiite and Sunni Islam, but also a respected figure among Christian Arabs. Sayings attributed to the central figure of Shiite Islam are written on banners all over the city of Najaf, with one banner proclaiming, “Our enemies are not the Jews or the Christians, our enemy is our own ignorance.”

Francis' vehicle stopped a few steps before the gates of the shrine in front of an alley where the ayatollah has a rented a modest home for decades. Upon his arrival, white doves were released as symbol of peace and then the pontiff walked through the narrow alley towards Sistani’s house.

Sistani, who is 91 years old and still healing from a fractured thigh bone since last year, is rarely receiving guests these days. Despite his health condition, the top cleric decided to stand up and greet the 84 years old pope at the door to his room.

With no media present, the two had a conversation which “underlined the importance of collaboration,” according to a statement from the Vatican. The “very positive” meeting lasted a total of 45 minutes. A statement released by Sistani’s office said, "His Eminence (Sistani) wished the Supreme Pontiff, the followers of the Catholic Church, and the general public of humanity good and happiness, and thanked him for making the effort to travel to Najaf to make this visit."

Sistani spoke about the urgent need to work toward removing “injustice, oppression, poverty and especially religious persecution and the wars, acts of violence, economic blockade and displacement of many peoples in the region.” He then reaffirmed the right of “Christian citizens to live like all other Iraqis in safety and peace, and with their full constitutional rights.” Sistani pointed out the role that the Marjayaa — a term used to refer to Iraq's top Shiite religious establishment — played in protecting Christians, referring to his 2014 fatwa calling on Iraqis to take up arms against the Islamic State and to defend local minorities from the ruthless persecution carried out by the terror group.

In response, Francis thanked Sistani for having "raised his voice in defense of the weakest and most persecuted.” At the end of the private meeting, the pope prayed to God "for a peaceful and fraternal future for the beloved land of Iraq and the Middle East."

Sistani wore his black cloak and black turban — an indication among Shiite Muslims that his ancestral lineage traces back to the Prophet Muhammad. The pope, for his part, wore all white cassocks. Yet despite the contrast in clothing, the two men share many common traits and beliefs. Both men are known to embrace humility in their everyday lives and push back against extremism within their own religion. In 2013, Francis replaced a conservative cardinal with a moderate one on the Vatican’s panel that names bishops. He is constantly calling for social justice and displaying humanity toward all people from different religions and cultures. In a similar manner, Najaf’s Shiite Hawza under Sistani’s patronage believes in a civil state, equal citizenship and separation of religion and politics, competing with Iran’s more extreme views on theocracy.

The pope’s visit to Najaf highlights two main strategic goals he is trying to achieve. First, to help preserve the local Christian community of Iraq and the Middle East, by showing support and fulfilling a promise he made to Arab Christians seven years ago that he would visit them. And second, to establish an official relationship between Najaf and the Vatican to discuss helping minorities and Arab Christians of the region.

Jawad al-Khoei, the general secretary of Al-Khoei Institute, told Al-Monitor over the phone, “The visit is important and historic because it is between two great personalities who are considered pillars of peace in the world.” Back in 2014, Khoei showed his support for Christians when he offered aid and accommodation for displaced Christian refugees fleeing IS. In an interview with Oasis, he said, “The Pope is not just the leader of Catholics but also an icon of peace.”

In a show of appreciation for his visit, Khoei gifted the pontiff a necklace carved in with a portrait of Jesus.

Zaid Bahar al-Uloom, the director of Al-Balaghi Academy for Interfaith Dialogue, told Al-Monitor, “The visit was a significant step to empower moderation in the region and support the Iraqi government in its reform path, emphasizing the principle that all citizens are equal in the eyes of law and no race or religion is better than another.”

After the pope left Najaf to travel to Dhi Qar, to hold an interfaith religious meeting next to the historical Ziggurat of Ur, mentioned in the Bible to be the birthplace of Abraham, Iraqi Prime Minister al-Kadhimi tweeted, “In celebration of the historic meeting in Najaf between Ayatollah Ali al-Sistani and Pope Francis, we declare March 6 a national day of tolerance and coexistence in Iraq."