The Vatican will inaugurate the Chaldean Patriarch of Iraq, Louis Raphael I Sako, as cardinal, which will strengthen the status of Christians in Iraq and bring them more global support. 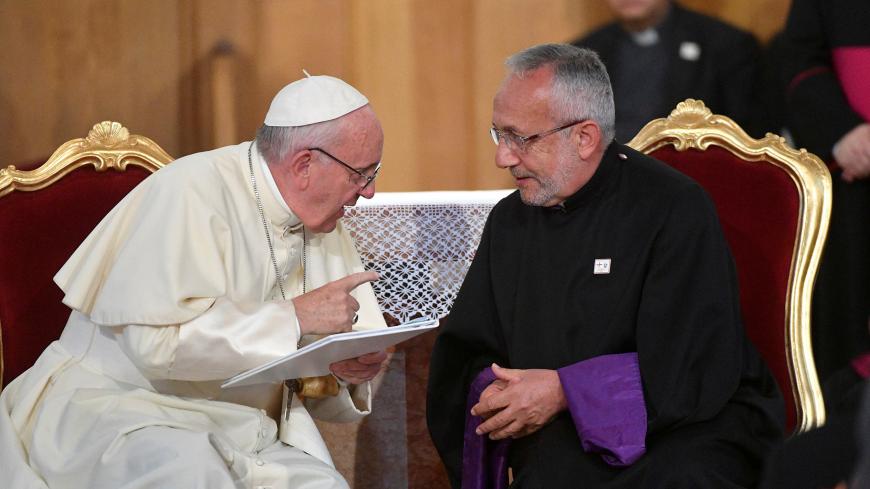 Pope Francis (L) talks with Patriarch Louis Raphael I Sako during a meeting with priests, seminarists and pastoral care agents at the Church of the Assumption, Tbilisi, Georgia, Oct. 1, 2016. - REUTERS/Luca Zennaro

BAGHDAD — Iraq’s Christian leader, Patriarch Louis Raphael I Sako, accompanied by a delegation from the Iraqi Chaldean Church, headed to Rome on June 25, where he will become a cardinal on June 28.

This major development will allow Iraq to have a say in choosing the next pope and give the country the chance to voice its aspirations to the international community, which may be a decisive factor in bringing Christians together around unified demands.

In this context, the Rev. Amir Jaji Dominican, an adviser to the Vatican’s Pontifical Council for Inter-Religious Dialogue, told Al-Monitor that Sako’s inauguration “is morally important to support the demands of Iraqi Christians, especially since becoming a cardinal comes with the right to vote and be nominated in the cardinals' congregation to choose a new pope.”

Sako believes his inauguration is proof of Pope Francis’ closeness to Iraq and his solidarity with the Iraqi people in particular. This gives Iraq a new chance to open up to the world.

“I believe Iraq needs to open up to all countries of the world," Sako told Al-Monitor. "Ever since 2003, the international community has never seen Iraq in a light that is worthy of its historical and civilizational role. It is time for Iraq to express its aspirations in building a country that guarantees a safe future for its people.”

The most important aspect of Sako's inauguration is how much influence this new position will have on the Iraqi state's relationship with the Christian minority on the one hand and its internal influence on the cohesion of the minority itself on the other. Perhaps this could serve as a positive factor to unify Christian visions and demands.

“The entire Vatican will be beside me,” said Sako, and the Catholic Church, with its 2 billion followers, will support the rights of Iraqi Christians. This can reassure Christians and encourage them to stay and be united in the efforts of Christian communities around the new cardinal once and for all.

Iraq has 14 officially recognized Christian communities, 12 political parties and seven armed units. It is thus often difficult to agree on many issues of interest to Christians, such as guaranteeing freedom of belief, forming a unified political bloc and the fate of the disputed areas between the federal government and the Kurdistan Regional Government (KRG), with a Christian majority, among other issues.

Hopefully, this inauguration can help Christians overcome their internal division.

“At this critical stage, Christians await unified action that takes into account their current circumstances," the letter read. "Christians are well-aware that the Church, representing all of us, is the only one standing beside us and supporting us.”

Sako proposed reconsidering the current structure of the council, according to what he called “new standards and in-depth visions of the present and the future.” In his letter, he suggested changing the council’s name to the Council of Churches of Iraq, similar to the Middle East Council of Churches and the World Council of Churches, all the while retaining previous denominations for official state-related procedures.

He also suggested reviewing the council’s structure and its rules of procedure and to benefit from the relevant global and Middle Eastern councils, as well as set a democratic procedure to pick the council’s president and vice president.

As for the relationship with the Muslim majority, Sako proposed to activate a meaningful dialogue with the Muslim authorities and other religions based on the principles of coexistence, respecting differences and working on finding common grounds.

Sako recommended building a relationship between Christian clerics and politicians in cooperation with representatives of Christians in the new federal parliament.

In a similar vein, Sako addressed Christian parties and politicians in the KRG, coinciding with its preparations for the elections to be held on Sept. 30.

This letter included a so-called fatherly request for these parties “to unite their ranks and enter the KRG elections under a single list.” His reason is to avoid what he referred to as “the multiplicity of lists and candidates, the dispersion of votes and the involvement of certain parties trying to influence the results.”

Sako proposed, after holding meetings with some Christian parties, to demand “the KRG to maintain the independent quota by issuing a law limiting the vote to Christians alone, as is the electoral system in Iran and Jordan, so that they can choose the best for them and for the KRG.” This demand goes perfectly in line with Sako’s earlier call to establish a unified political authority for Christians.

Some Christian clerics are betting on Sako’s inauguration to bring about a positive development in the rights of Christians under the new government.

In the words of Iraqi Anglican pastor, the Rev. Faiz Bashir, “Sako’s charisma qualifies him to be more influential than any other Iraqi Christian cleric. Through his relations with the influential Islamic authorities in Iraq and his ability to clearly convey his ideas, him becoming a cardinal can indeed be a decisive factor in providing a unified Christian identity to confront the current challenges.”