Louis Raphael I Sako, the new patriarch to the Iraqi Chaldeans, hopes to reverse the exodus of Iraqi Christians from Iraq, reports Abdel Hamid Zebari. 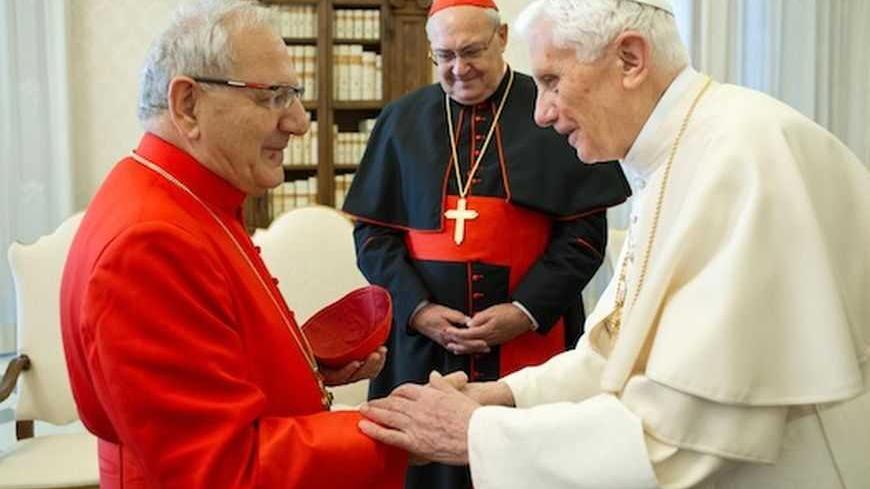 Christians in Iraq are hopeful that new Chaldean Patriarch Louis Raphael I Sako will stem the tide of Iraqi Christians leaving the country.

Since 2003, Iraqi Christians have been subject to attacks by groups labelled as terrorist organizations. Thousands of families have been forced to leave their homes in central and southern Iraq for the Nineveh plains or cities in the Kurdistan region of Iraq. Others emigrated to Europe, the US, Canada and Australia. Christian statistics show that 15,000 families have left the center and the south, heading toward Iraqi Kurdistan or abroad.

On Feb. 4, Sako, chairman of the Chaldean archbishops in Kirkuk and Sulaymaniyah, was appointed patriarch of the Chaldean Church in Iraq and around the world, succeeding Cardinal Emmanuel III Delly, who resigned from the post in December at the age of 85. Upon his return from Rome, official ceremonies were held for him in the predominantly Christian town of Ankawa, in the city of Erbil and in the city of Kirkuk, where he was warmly welcomed by citizens waving olive branches and images of the Virgin Mary. Many of them hope that Sako will bring back security and safety.

Christians in Iraq numbered 800,000 in 2003, according to statistics from global and international organizations. Their presence is concentrated in the capital, Baghdad, and in the Nineveh plains, near Mosul. They are also found in Dohuk, Erbil, Mosul, Basra, Amarah, Hillah, Baqubah, Habbaniyah and Kirkuk, among others.

In his first press statement, Sako said that "priests should set an example for us, we should not only seek their safety," especially "at this critical moment that Iraq is going through." He added that "the next Synod of the Chaldean Church will be held in Baghdad and I personally asked all other bishops, including those in the diaspora, not to miss it.”

Khaled Jamal Albert, the general manager of the Christian Endowment at the Ministry of Endowments and Religious Affairs in the Kurdistan Regional Government, told Al-Monitor that "they are preparing for the inauguration ceremony of the new patriarch in the city of Baghdad early next March."

He added, “The Patriarchate is preparing to receive his functions and his ordination will take place on Mar. 6, 2013, in the presence of delegations from the Vatican and representatives of the church council from the St. Joseph church in Baghdad. His duties will start immediately thereafter." He added that "Sako is capable of strengthening relations between Christians and Muslims."

Sako denied recent rumors that the Chaldean Patriarchate chair might be moved to the US. "I will be staying in Baghdad because I want to be with my Christian brothers and all those who are still living and suffering there," he said.

In a speech made during his welcome ceremony at St. Joseph in the town of Ankawa in Erbil, Sako said, "I am not only the father of Christians, I feel I am a patriarch for Muslims as well."

He continued, "I will work for Christian-Muslim dialogue and seek to establish the principle of brotherhood and peaceful coexistence. I will remain close with everyone and at the same distance from everyone because I am Iraqi and want to work for all Iraqis." He added that "without dialogue there is no life and progress, we all have to build bridges of love and peace with other religions and with all Iraqis. "

There are Christians who hope that Sako's election will bring hope to the Iraqi people as a whole, and that he is capable of achieving unity, peace and tranquility for all. Sako has insisted on staying in the country and exercising his functions from Baghdad.

Albert added that the patriarch's job is difficult given Iraq's circumstances. “We hope Patriarch Sako will bring the country back to dialogue, addressing problems that plague Christians and strengthening relations between Christians and Muslims,” he said. Christians, Albert said, are victims of the same problems plaguing the Sunni and Shiite sects in Iraq.

Sectarian tension between Shiites and Sunnis increased dramatically in Iraq from 2005 to 2007, leading thousands of families to move to areas dominated by a particular majority or to emigrate from the country.

Concerning Iraq's Christian migration to different countries across the world, Sako said: "We have to limit emigration. I will do my best to convince Iraqis in the diaspora to return to Iraq because they are the original inhabitants."

In his speech at St. Joseph’s, he added, "I want to unite, not divide. I want to bring people together."

Sako, who has a master's degree in Islamic jurisprudence, is a prominent figure in Kirkuk who has sought to establish love and unity and to address the problems plaguing political parties through dialogue. He has held several seminars and meetings to bring together and ease tensions between political parties. The Heart of Jesus Cathedral, Sako's residence in Kirkuk, became a center for dialogue and meetings that renounced violence and discrimination.

Sako is the third patriarch of the Chaldean Catholics to be chosen cardinal of the Chaldeans in the Vatican. He was preceded by Cardinal Bidawid and Cardinal Emmanuel III Delly. Sako was born in the city of Zakho on Jul. 4, 1948 and became a priest in the Chaldean diocese of Mosul in 1974. He received a Ph.D. from the Pontifical University in Rome in 1983, and a master's in Islamic jurisprudence in 1984. He later received a Ph.D. in the history of Iraq from the University of Sorbonne in 1986.