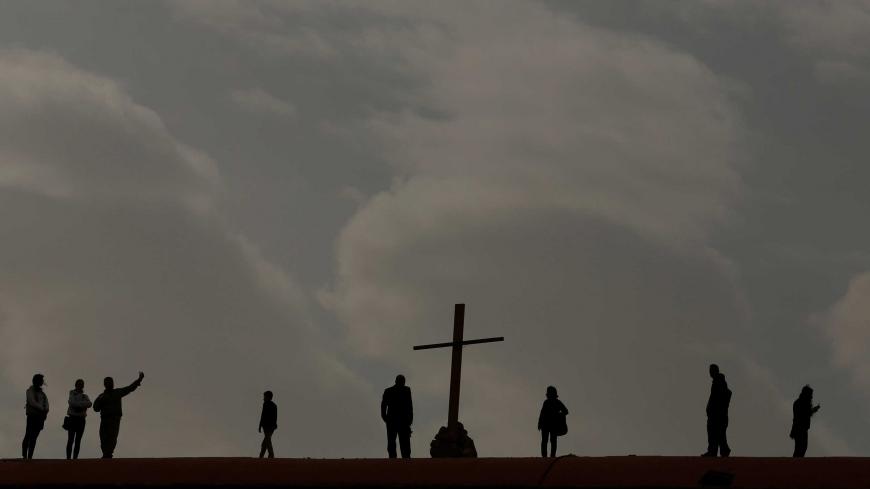 BAGHDAD — Christian activists and politicians recently have been objecting to the greater involvement of religious leaders in Iraqi political affairs.

Following the redeployment of Iraqi federal forces in Kirkuk, Chaldean Catholic Patriarch Louis Raphael I Sako issued a statement Oct. 19 calling on Iraqi leaders in Baghdad and Erbil to proceed with genuine national reconciliation to put the political process on track. He stressed that it is important to preserve human beings and not oil wells, in reference to the recent dispute over the Kurdish independence referendum, which ended with federal government control of Kirkuk. The title of the statement, "An Appeal to Iraqi Leaders," shows the nature of the patriarch's view of his role as a national and moral guide for politicians on all sides, and his view of himself as a leader of Christians amid a Christian political split over the referendum and its results.

In conjunction with the crisis of the Kurdish independence referendum, a group of Christian clerics launched a political project in which they formally demanded separation from Iraq. Some others have called for joining the new Kurdistan state.

Assyrian activist Muna Yaku, a member of the committee writing the constitution of the Kurdistan Regional Government, criticized the intervention of the Christian clergy in political affairs in a post on her Facebook page. She said decisions regarding the political future of Iraq’s Christians should be made by politicians and political parties, not Christian clerics.

“I want to understand who made the clerics the official spokesmen for the Christians,” she wrote.

Speaking to Al-Monitor, Yaku asked, “Would a cleric be OK with the head of a political party entering his church and initiating the Sunday Mass instead of him?”

For his part, Riyad al-Sindi, a diplomat and expert on Christian affairs, told Al-Monitor that the criticism of the clerics' involvement in political issues reveals the conflict between politicians and clerics over who represents Christians.

Sindi, who has written articles analyzing the causes of the internal Christian division, believes “the struggle over the representation of Christians in their 14 sects has made an impact on the church’s positions and statements, which are lenient at times and strict at others.”

Sindi said, “In 2016, Patriarch Sako declared that the political authority of the church is the Iraqi government and that its official representatives are members of the parliament. However, this year, he changed his position when he said a member of the parliament represents neither Christians nor Chaldeans, but officially represents his political bloc, and he was talking about member of parliament Joseph Saliwa.”

Saliwa, a member of the federal parliament for the al-Warka bloc, criticized Sako following a statement issued by the Chaldean Church in July in which the church rejected the results of the Brussels Conference on the future of Christians in the Ninevah Plain, which called for establishing a province for Christians in the plain. Saliwa said Sako was a cleric and should not interfere in politics.

Saliwa told Al-Monitor that he refused to use the term “the Christian component” because he believes it is a sectarian label and prefers to say “the Chaldean Assyrian Syriac component.”

This is considered a response to Sako's call to unify the Christian denomination as “the Christian component,” in the same way as the Sunni, Shiite and Yazidi components, instead of the relatively long national name of “the Chaldean Assyrian Syriac people.”

“I am absolutely for separating religion from politics, including the clergy. The objectives of religion focus on moral and spiritual areas. Meanwhile, politics and its functions are different in terms of the administration of the state, and the clerics have nothing to do with it,” Saliwa said.

Sako's statements, which often criticized Christian political figures, led to an exchange of accusations through the media. For example, on Feb. 15, Sako denounced the statements of Ryan al-Kaldani, the leader of the Babylon Brigades, an armed Christian faction fighting under the umbrella of the Popular Mobilization Units, who accused all the people of Mosul of being cooperative with the Islamic State and not standing with Christians who were expelled from the city on 2014.

Sako said, “We want everyone to know that Sayyid Ryan has nothing to do with the morality of Christ, the messenger of peace and love. He does not represent Christians in any way, nor is he a Christian authority, and we do not accept that he speaks for Christians,” pointing out the negative effects of Kaldani’s words and saying, “His unfortunate statements aim at creating sectarian strife.”

The Babylon Brigades immediately responded by issuing a strongly worded statement, published by the local media Feb. 16, describing Sako as a “politicized” cleric and threatening to sue him.

This tug of war between politicians and clerics shows that Sako is the Christian religious leader who has the greatest amount of opposition and criticism because of his charismatic personality, which has allowed him to take bold steps that have been a strong competition for politicians.

For instance, in 2016, he called for a unified ecumenical council as a political authority for Christians participating in elections under a single list. He also called for unifying the Christian denomination on a religious basis, rather than fragmenting the national labels, and he headed clergy delegations to meet with the heads of major political blocs.

The difficult circumstances facing minorities and Christians seem to have pushed clerics to take firm positions in politics.

Roman Catholic Rev. Amir Jaji, the adviser to the Pontifical Council for Interreligious Dialogue, spoke of the steps taken by Sako to end the division between the Christian parties. Sako used his influence on Christian members of parliament in an attempt to unite them.

“Patriarch Sako tries, through his speeches and positions, to overcome division and unify the Christian discourse in the context of asserting the national Iraqi identity and face the challenges affecting the whole country, and this explains every action of his,” Jaji said.

Why has Sako been speaking out the way he has?

In an article titled “The Controversy of the Church, Politics and Positions of Principle,” Sako writes, “A patriarch never seeks to be a political pole for Christians, but it is his duty as father and patron, and in light of the current political, social and security situation in the wake of multiple conflicts and the emergence of IS, to defend, like his mentor Jesus Christ, the oppressed, the displaced and the poor.”

The article continues, “It is a patriarch’s duty to call for national reconciliation and effective partnership to build a state with fair laws and a comprehensive, all-embracing homeland.”