Run-ins between Christian factions' armed units in Iraq expose growing gaps in the parties' visions for their future. 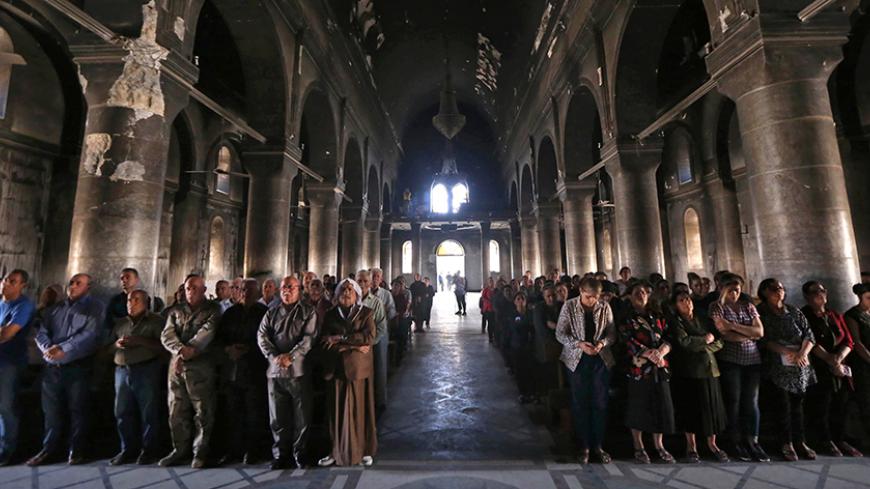 BAGHDAD — Iraqi Christians will have to unite under one banner and work past their various political affiliations and differing doctrines to heal the division that threatens the religion from within, the head of the Chaldean Catholic Church in Iraq said after two armed Christian factions clashed in the Ninevah Plains.

Patriarch Louis Raphael I Sako issued a statement Aug. 6 in which he said that Christian political parties and armed factions are “responsible to a great extent for the suffering and disorder in which Christians live.” He added, “We believe that a huge part of this ordeal is caused by parties' divisions, their subordination [to Shiite and Kurdish groups] and their failure to unite efforts and ranks and make a unified decision.”

“The forces took over weapons and vehicles for the purpose of freeing the six arrested agents,” Kanna told Al-Monitor. However, the Babylon Brigades — the military wing of the Christian movement in Iraq, which is affiliated with the PMU — denied the allegation.

These clashes were followed by accusations from both the Babylon Brigades and the Ninevah Plain Protection Units, which is the military wing of the Assyrian Democratic Movement. The movement announced that the conflicts resulted in Prime Minister Haider al-Abadi and the PMU's ordering the Babylon Brigades to leave the Hamdaniyah district. The Babylon Brigades denied that statement.

Internal Christian divisions have long existed, but they deepened when a number of armed Christian factions formed after the Islamic State (IS) took over Christian territories in the Ninevah Plains.

The federal government in Baghdad and the Iraqi Kurdistan government share the responsibility for controlling seven armed Christian factions in the plains. The fate of the Christian territories there is uncertain, complicated by the Kurdistan Regional Government’s planned referendum on independence in September. In addition, IS still controls parts of Iraq, and Iraqi forces are currently battling for Tal Afar.

Some of the armed factions are affiliated with Christian political parties and some were founded with the potential to transform into political organizations that might participate in the next parliamentary elections. In addition to the Babylon Brigades, the most prominent armed factions include guards affiliated with the Chaldean Syriac Assyrian Popular Council, the military wing of the Assyrian Democratic Movement, the Assyrian National Party Brigades, the Ninevah Plains Forces, the Lions of Babylon Brigades and the Katayeb Issa Ibn Maryam Brigades.

The last attempt to reach a consensus concerning those two points was during a June meeting held in Brussels to discuss Christian conditions in the post-IS Ninevah Plains. The European Union-sponsored conference demonstrated how deep the internal Christian divisions are. The Democratic Syriac Union, al-Warka Democracy List and the Christian Independent Democratic Movement announced their complete support for the conference, even as three Christian parties boycotted the meeting. The three parties that did not attend were the Assyrian Democratic Movement, the Entity of Abnaa al-Nahrain and the Assyrian National Party. The Chaldean Catholic Church and the Assyrian Church of the East also boycotted the conference. The Chaldean Catholic Church stated its belief that the problems in Iraq should be addressed in Iraq rather than in the West.

“It is our belief that the future of Christians is connected to the future of all Iraqis and … their future must be looked into inside the Iraqi house, rather than outside it.”

During the conference, participants agreed to create a new province as a safe zone in the Ninevah Plains for Christians and to form a military council in coordination with unified Christian military units under supervision of the international coalition, along with the federal government and the government of Iraqi Kurdistan. Still, Christians have not decided yet how to implement these decisions, given the chronic Christian division. However, Christians intend to form a committee to negotiate with the federal government and Iraqi Kurdistan to reach a unified vision soon, Joseph Sylawa, the head of the Warka parliamentary bloc, told Al-Monitor.

The Christian armed factions might represent the best chance to form security units for the proposed Ninevah Plains safe zone, especially because of the experience the factions gained fighting IS. To transform these factions into a local police force or security units, several conditions must be met: They must become unified, overcoming their differences; they must be integrated vertically into the state or hierarchically into the Iraqi army, provided that they are granted independence within boundaries of the safe zone; and, as much as possible, they must be depoliticized.