Pope Francis spent the final day of his historic trip to Iraq visiting areas in which the country’s Christian minority has traditionally had a sizeable presence and the capital of the Kurdish region, to which many have fled amid improved but still fragile security. 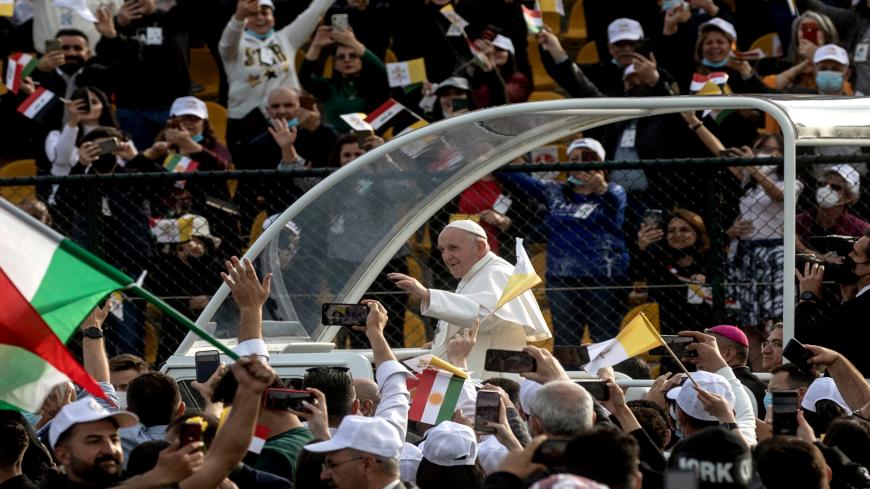 Pope Francis waves to the crowd as he arrives to conduct mass at the Franso Hariri Stadium, Erbil, Iraq, March 7, 2021. - Chris McGrath/Getty Images

ERBIL, Iraqi Kurdistan — The head of the Roman Catholic Church, Pope Francis, arrived in the capital of the Kurdistan Region of Iraq just after 8 a.m. on March 7, on the last full day of his three-day visit to the country, touching down not far from where rockets had hit some three weeks before.

Even though the country is safer now than it has been in many years, it is still subject to violent attacks by both Islamic State (IS) cells and “outlawed” armed groups often presumed to be acting at least partially out of sectarian motives.

Iraq as a whole is also still battling the coronavirus pandemic, as is most of the world. This was the pope’s first international trip since the beginning of the pandemic a year ago. The apostolic trip had been awaited by Iraq's Christians for decades, and he did not want to postpone it. In 2000, his predecessor had expressed the desire to visit Iraq, but in the end decided not to out of security concerns.

During the first two days of the trip, Pope Francis visited the Iraqi capital; the Shiite holy city of Najaf, where he met with Grand Ayatollah Ali al-Sistani, the highest religious authority in the Shiite sect in the country; and the ancient biblical city of Ur in the southern Dhi Qar province, as part of his consistent push for interreligious dialogue and peace in general.

The last day of this papal “pilgrimage” was set aside for areas from which many of his own faith have fled, as well as Erbil, a city that many Christians fled to.

On March 4, Vatican News published an article that stated, “The Archdiocese of Erbil hosts the largest community of displaced Iraqi Christians. The communities have ancient roots going back almost two thousand years.”

Shortly after meeting with KRG officials at the Erbil airport, Pope Francis left by helicopter to go to Mosul to pray in a church in the still heavily damaged city center, which contains churches of various denominations. Though Christians are a minority in the country, they are represented by the Syriac Catholic, Syriac Orthodox, Armenian Orthodox and Chaldean Catholic communities.

He then went to Qaraqosh in the Ninevah Plains, parts of which have been long disputed between Baghdad and Erbil and which are home to a variety of minority groups, prior to returning in the afternoon for a mass in a large stadium in the city.

No reliable census figures exist for Iraq as a whole and relative percentages of the various sects present in the country has long been a source of heated dispute. Most agree, nonetheless, that Shiite Muslims account for the largest portion followed by Sunni Muslims and then Christians and other minority groups.

There has been a significant exodus of Christians from their home areas as well as from Iraq in general in recent decades. Many were displaced from the Ninevah Plains and the city of Mosul during the years that part of the country was under IS occupation; they have yet to return to their native areas.

In August 2017, the Global Public Policy Institute wrote in a report that IS had “completely looted and destroyed Qaraqosh” and that it was “one of the more extreme examples of the group’s deliberate destruction of the communities they captured.”

Though Muslims have long experienced the highest casualty counts in sheer numbers from attacks by IS cells and other nominally Muslim extremist groups worldwide as well as in Iraq, some say IS’ treatment of the Christian community in Iraq can be considered “genocide.”

Christian and Shabak militias from the Ninevah Plains were involved in fighting IS in their home areas, which were overrun by IS in the months following their taking of Mosul in June 2014. These areas were retaken in late 2016 through the efforts of federal forces, the peshmerga and these militias.

The Ninevah Plains Protection Unit (NPU), for example, an Assyrian Democratic Union-sponsored force officially part of the Popular Mobilization Units (PMU), was for a period tasked with holding the southern Ninevah Plains around Qaraqosh and were reportedly the only Christian armed force to receive US-led Tribal Mobilization Force training.

When this journalist visited Qaraqosh in 2016 shortly after it had been liberated, the militia’s NPU had been scrawled across many walls, as was the habit of many PMUs at that time in towns they had helped to liberate from IS.

Other Christian forces involved in the fighting and holding of terrain received support from the KRG, including the Ninevah Plains Guards Forces, which apparently existed in some form initially in the post-2003 period as a neighborhood watch force, and Dwekh Nawsha, which included several international “volunteers.” This journalist visited the latter during a reporting trip to the Tel Skuf frontline in 2016, when peshmerga officers were working in close proximity with them.

Thus, the KRG forces and the Christian communities that had been living in parts of the Ninevah Plains have longstanding ties and many decided to stay in the KRG even after IS was pushed out, due both to a lack of services and fears of a return of extremist groups.

Meanwhile, territorial and other disputes between the central government and the KRG have often been fractious but attempts to bridge the gaps between them are ongoing. Some hope that Pope Francis’ visit will work toward this end as well.

On March 6, KRG President Nechirvan Barzani tweeted, “I welcome Iraqi Prime Minister Mustafa al-Kadhimi’s declaration of March 6 as the National Day of Tolerance and Coexistence” in honor of the pope’s visit.

Pope Francis’ words on March 7 in Qaraqosh seem an attempt to point out a direction of how Christians should seek to achieve this coexistence: “Forgiveness is necessary to remain in love, to remain Christian. The road to recovery may be long but I ask you to not give up.”