The small area of Iraq’s Ninevah Plains not occupied by the Islamic State is home to two separate Assyrian Christian paramilitary forces. 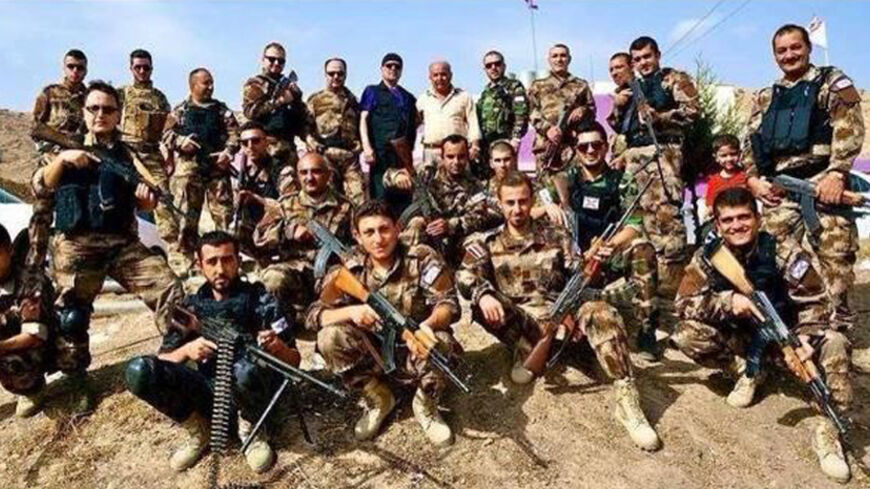 Assyrian fighters from the Ninevah Plains Unit pose with their weapons in Ninevah province, Oct. 26, 2014. - Twitter/@assyriansoul 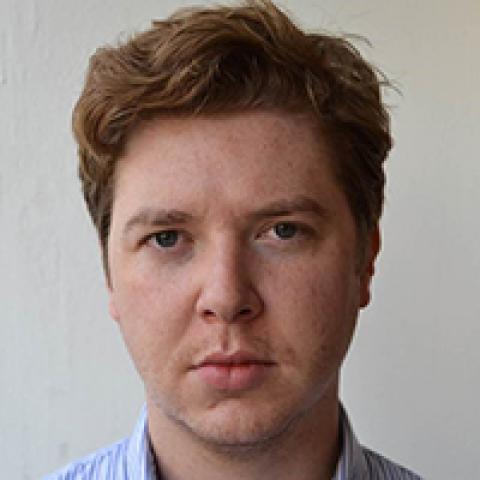 In the town of Alqosh, at the northern limit of the Ninevah Plains, uniformed and armed members of the Assyrian Democratic Movement’s (ADM) force once patrolled the streets. The town of around 10,000 Christians sits on the first hills to emerge from the plain, with a single road leading into it.

The ADM is one of Iraq's main Christian political parties, with two deputies in the Council of Representatives in Baghdad and two members in the Kurdistan parliament in Erbil. The party has had armed forces since the 1980s, when it mobilized against Saddam Hussein’s regime in alliance with the Kurds. Currently, the armed forces are thought to number around 2,000 men, most of whom provide security in party offices.

In Alqosh, there are now around 40 members of the ADM force — an increase from before the Islamic State's (IS) arrival in the area. In early August, IS’ advance precipitated an evacuation of the town’s civilians. While they were away, the ADM force patrolled the town, mainly to prevent theft and looting. Since the people came back, the forces have restricted their activities to observing the plains from their office rather than patrolling the town, with plans to safeguard any future evacuation. ADM force members told Al-Monitor that their ending of patrols was due to a desire not to intimidate local people. There is perhaps some truth in this, although it is also true that the ADM is not universally popular in Alqosh, and that for many people the ADM force is somewhat irrelevant.

The Ninevah Plains lie east of the Tigris where it flows through Mosul. Historically, the area was home to many of Iraq’s Assyrian Christians, who trace their ancestry to the ancient Assyrian empire. Until IS arrived, it was one of the last holdouts of Christianity in Iraq, although Yazidis, Shabaks, Arabs and Kurds also lived there. Since 2003, security in the region has been uneasily divided between federal and Kurdistan Regional Government (KRG) forces, with a number of attacks on minority groups. Previously, the towns of Qaraqosh and Bartella, both on the Ninevah Plains, had protection committees that organized local guards to work with security forces. These committees seem to have been organized through local churches and to have been concerned exclusively with local security; they made no impact on the IS advance, for example. In other unoccupied areas of the Ninevah Plains, there are still similar groups, which amount to local men armed with Kalashnikovs guarding their own villages.

A few kilometers south of Alqosh is the village of Sharafiyya, where a new force, called Dwekh Nawsha, is based. The group’s commander, Lt. Col. Odisho, told Al-Monitor that Dwekh Nawsha numbers between 50 and 100 men, although more than 200 men have expressed interest in volunteering; the group is held back only by a shortage of weapons. Dwekh Nawsha provides security in Sharafiyya, from which almost the entire population has evacuated, and also occasionally supports the peshmerga on the frontline — but not as often as they would like. While the ADM force members in Alqosh are local, Dwekh Nawsha members come from various towns and villages across northern Iraq; some have military or police experience. The group is an initiative of the Assyrian Patriotic Party, a much smaller entity than the ADM, and one which is much more comfortable with the KRG than the ADM is — the party has friendly relations with the pro-KRG Chaldean-Syriac-Assyrian Popular Council, the ADM’s main opposition.

Where the ADM force is noticeably wary of the Kurdish government, stressing the perceived failure of the peshmerga to protect Christian areas and the legal basis of Baghdad’s claim to control the Ninevah Plains, the Dwekh Nawsha is working with the peshmerga. The men wear Zeravani badges. The Zeravani are a special unit of the Kurdish security forces, akin to a gendarmerie. In Kurdistan, different parts of the peshmerga are controlled by different parties, mainly the dominant Kurdistan Democratic Party and Patriotic Union of Kurdistan. The Zeravani are likewise split, with every registered political party having the right to 40 Zeravani badges for the security of their offices and members.

Both the ADM force and Dwekh Nawsha are open to any Assyrian man, regardless of church or party affiliation — for example, most members of Dwekh Nawsha are not Assyrian Patriotic Party members. Both complain of a lack of funds and by extension, of weapons: Both forces are armed with Kalashnikovs and a small number of machine guns, and both get their weapons from the black market. Both support the establishment in the Ninevah Plains of an autonomous region for the Christians and other minorities, and the members of both forces give similar motivations for joining — a desire to protect their people in their ancient homeland, combined with a wish to be less reliant on others for their security. Both forces hope to significantly expand their numbers following the removal of IS from the Ninevah Plains and ultimately to establish a unified Assyrian force. However, the ADM stresses the legality of Baghdad’s claim to the Ninevah Plains, while the Dwekh Nawsha are happy to work with Kurdish forces they believe will control the area after IS is gone.

Despite the similarities, the two groups have not collaborated. This reflects a larger split within the Assyrian community in Iraq, between those who prefer to work with the KRG to further their goals, and those who work with the central government. The fundamental aims — of Assyrian autonomy and self-defense, with the possibility of international protection — are the same. It is impossible to say whether the division of forces will weaken the Assyrian cause, or if being able to appeal separately to the regional and federal governments will prove useful.