Iraqi Christians return after IS amid safety concerns

A year after their liberation from IS, Christian towns in Iraq are populated once again by their original inhabitants, but many remain wary about returning home. 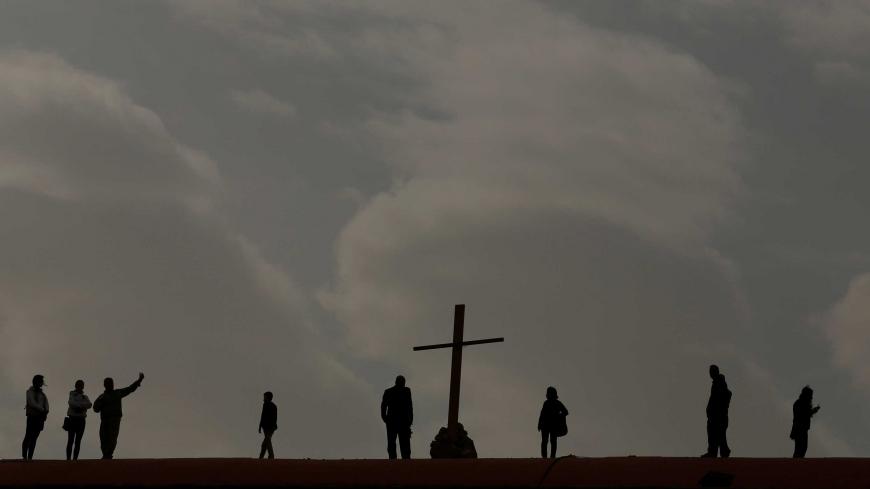 Iraqi boys visit the burned out main church as others attend the first Palm Sunday procession in the Christian city of Qaraqosh since Iraqi forces retook it from Islamic State militants, Iraq, April 9, 2017. - REUTERS/Suhaib Salem

QARAQOSH, Iraq — “We want our own guards. It is too difficult without them,” said 70-year-old Sarah Kriaqosh Hannah. “Before, they were our sons. Now we do not know who they are.”

She has walked into the office of Father Yacoub of the Syrian Orthodox Mar Shimoni Church in Bartella. The church next door is still partly burned and damaged a year after the Christian town on Iraq’s Ninevah plains was liberated from the Islamic State (IS). Many houses, too, still bear the scars of two years’ occupation by the radical group, looting and coalition bombs aimed at driving out or killing the IS leadership.

Of the families who fled Bartella in August 2014, only 700 or so have returned. Over 1,000 have remained in the Kurdistan region, where they found refuge. The rest have managed to emigrate and leave Iraq.

The situation in Bartella is bad, Yacoub said, as there is hardly any electricity, no health care, a barely recovering education system and most importantly, no security. The problem is with the Shiite Shabak, a religious and ethnic group that has returned in larger numbers than the Christians. They have their own militia, part of the Iraqi Popular Mobilization Units, whose Shiite volunteers are feared due to the violent, vengeful behavior they displayed in the battle against IS.

Already problems have arisen, Yacoub said, with militiamen following Christian women in the streets, driving around playing their religious music at top volume and marching through the town beating their chests during the religious procession of Arbaeen, the yearly remembrance of the martyrdom of the Prophet Muhammad’s grandson. “It is disrespectful of the Christian people!”

There have also been problems between the militia and Christian young people trying to collect data on who has returned for the church for aid purposes. “The militia detained one of [the youths], saying he had no permission. Who are they to demand we get permission?”

The priest also complained about houses looted after the liberation and Christian agricultural land that was taken by Shabak families. “These are all indirect messages to the Christians not to return.”

He agreed with Kriaqosh. Given that the local Iraqi police have no power over the Hashd militia, people would feel safer if the Christian community undertook their own policing. But the local Christian force that was trained for that duty by the Kurdish peshmerga forces has been banned from entering Bartella due to that affiliation.

Many of Bartella’s Christians supported the Kurds in their recent referendum on independence, opting even to become part of a Kurdish state. But Baghdad’s harsh reaction to the referendum, taking back land from the Kurds and imposing sanctions, has also had a negative impact on Christians.

Members of the Shabak minority have lived in the area for decades. In Bartella, they have been taking over Christian houses and businesses, as Christians had been leaving Iraq in large numbers for years, long before IS arrived. The two Shabak butchers on the way into town rent their shops from Christians. One of them, Hussein Mustafa, said, “Business is bad, because many Shabak did not come back. But security is good. Thanks to the Hashd, we can play soccer until midnight and nothing happens.”

Relations with the Christians are “good but not very good,” Mustafa said, as other men join the conversation. According to the men, Christians want to sell their houses and receive compensation for the damage. The Shabak suffer as a result of their religious discrimination, as the Christians do not want to mix. “For 40 years, we practiced our religions side by side and respected each other,” Mustafa said.

While Bartella is a sea of flags depicting Shiite saints, in neighboring Qaraqosh the banners only fly from some of the checkpoints at the entrances into town. Here, the Christians are protected by their own force, the Ninevah Protection Units, a battalion that forms part of the Iraqi army.

Life has returned to Qaraqosh much more than it has to Bartella. And even though the upper floors may still be badly damaged, the local shops, tea houses and restaurants are open and bustling. Houses are freshly painted in red and yellow to erase the memories of IS, who looted and burned many buildings before leaving.

Young Christians run most of the shops. These include 24-year-old Iso, who bakes the local lahm bahjin, a thin, crispy pizza with meat sauce and egg. He thinks that only a quarter of the town’s young people have returned, with the rest in Kurdistan, Baghdad or abroad. He hesitates when asked what he thinks about the Shiite militias in the area. “If Christians were in control, it would be better,” he finally said, carefully.

The Hashd also took their Arbaeen procession to the streets of Qaraqosh, but here people hardly reacted to it. They are more preoccupied with the fact that the Sunni villagers who stayed during the IS occupation, many of whom they say collaborated with the group locals call Daesh, are still there.

“Daesh is finished, but the villagers stayed. Their ideology is the big challenge,” said the Rev. George Jahola, who heads the Church Supreme Board for Reconstruction.

It is estimated that about half of all the 150,000 Ninevah Christians have emigrated, while the Syrian Catholic priest thinks that about 90% of those who stayed have returned to his town. Most families have been back since September, arriving before the school started, but many of the men continue to work in Kurdistan and only return for the weekends.

Unlike in Bartella, safety has attracted residents to return to Qaraqosh — that and Jahola’s reconstruction project. “We showed people that we spent the money in a good way. And that life can start again.”

His commission made an inventory of all the houses in Qaraqosh, dividing them into three categories: destroyed, partly destroyed and damaged. He points to the satellite map of the town and to colored charts illustrating the situation. Repairing everything would take $65 million. “Till now, we have only received $1 million.” None of that came from the government; the entire sum was provided by churches and nongovernmental organizations in Europe. Iraq’s budget for next year sets aside far too little money aside for post-IS rebuilding.

Just like his colleague in Bartella, Jahola stressed the Christian identity of his town. The Ottoman name of Qaraqosh is to be changed back to Baghdeda, the original Christian name. “Land provides the population with identity and security,” he said. Which is why, like Yacoub, he is not happy with the presence of the Shiite militias. He said the Christians are opposed “to the invasion of other populations. We already have such a small area. If we accept non-Christians, we will have even less space.” 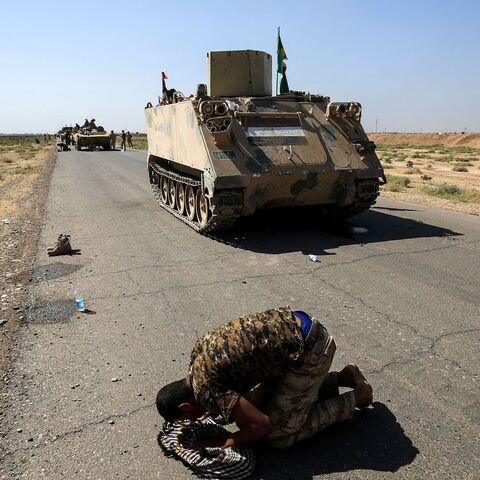 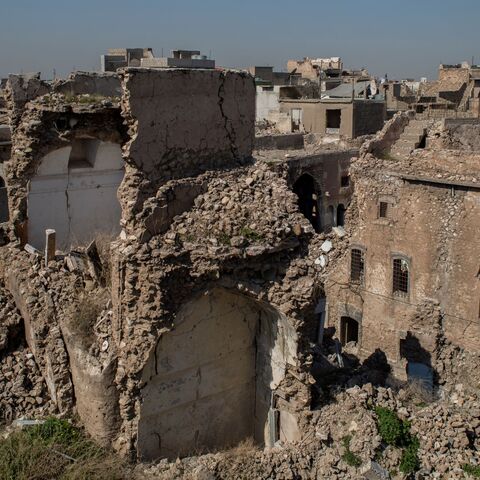