In Iraq, churches have taken the lead in persuading and helping Christians return to towns razed by the Islamic State. 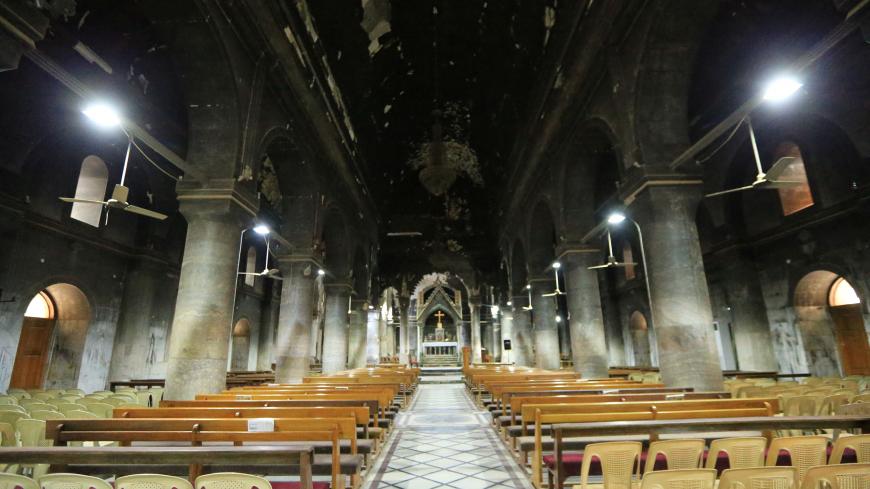 The Church of the Immaculate Conception, which was burned by Islamic State militants, is seen in the town of Qaraqosh, south of Mosul, Iraq, Dec. 23, 2017. - REUTERS/Ari Jalal

QARAQOSH, Iraq — “I was the first to repair my house and move back here,” said Archbishop Yohanna Petros Mouche of the Syriac Catholic Church in Qaraqosh. He gestured toward his home in the Christian town on the Ninevah Plains where fresh paint and new religious images now cover the scars of two years under the Islamic State. “We prepared this home and started celebrating religious ceremonies again to encourage people to return with their families. And when they saw it, they came too.”

Though Qaraqosh was liberated 18 months ago, civilians only started returning after the schools reopened in October. Mouche is working to attract as many Christians as possible to bring the town back to life. But it is also a fight against rumors. “When people say it is dangerous, I reply that there are many restaurants and shops, and people are enjoying life again,” he said.

That about 5,000 families, some 22,000 souls, have returned is mostly due to the efforts of the bishop and his church. A church reconstruction commission helps civilians repair houses that were looted and damaged and has been instrumental in reopening shops. The bishop oversees the process personally. Houses have priority over churches, he said. “We want to have civilians here who can bear witness to the development. And I try to create jobs and offer opportunities for recreation too. Opening parks is important for the younger generation.”

The bishop was opening a small shopping mall the day of his interview with Al-Monitor, which will sell men’s wear, run by local businessman Mohanad Yousef. The center of Qaraqosh is alive again, with shops selling fruit and fresh vegetables, clothes, toys and even bicycles next to teahouses and counters selling traditional bread. On Palm Sunday, thousands gathered in the city center for the first open-air ceremony in three years.

“I love this town and this country,” Yousef said, explaining why he returned from the German state of North Rhine-Westphalia, even though he had become fluent in German and praised the life he had. “Yes, I had a better life there, but my family and friends are here. I have been waiting impatiently for things to improve in Qaraqosh.”

His example makes it clear that the church has been successful in attracting not only people who fled to the neighboring Kurdistan Region when IS arrived in 2014, but also from the West, where approximately half of all the Christians who fled Ninevah eventually emigrated. The bishop pointed to 15 families who have returned from France and 13 from Germany, saying he expects more to follow. Many members of his flock are not happy abroad, he said. “When I visit our families in Europe, many tell me, ‘We cry when we get up and we cry when we go to bed.’”

Before the Iraqi dictator Saddam Hussein was ousted in 2003, the Christian population of Iraq stood at around 1.5 million. After the civil war between the Shiites and Sunnis and the subsequent rise of al-Qaeda, only 600,000 or so remained. And since IS captured large parts of Iraq, half of those are thought to have left the country.

Security is the main concern, the factor that determines whether families stay away or return. Even though Iraqi Prime Minister Haider al-Abadi declared the battle against IS over several months ago, members of the terror group who went underground are responsible for a growing number of attacks like the murder of a Christian doctor, his wife and mother in their Baghdad home in March.

Incidents like this dissuade people from returning and have kept Yousef’s wife and children in Germany. “There are rumors going around that the situation is not good. But that’s not true, because it really is so much better now. God willing, my family will join me at the end of the next school year.” Now that he is back on his feet in Qaraqosh, he is fighting the rumors and trying to convince others to return, too. “I phone people and try to actively persuade them. I am more convinced myself now, which helps me to convince others.”

Even though the Iraqi government has hardly engaged with Qaraqosh at all, Yousef is optimistic for the town of his birth. The state is as markedly absent as it is in other Iraqi towns retaken from IS like nearby Mosul, where civilians have taken the initiative and are bearing the cost of rebuilding their cities themselves. In Qaraqosh, it is the church that is driving the rebuilding process with money and help from foreign donors.

Yousef lost over $400,000 when IS set fire to his shops during the liberation of Qaraqosh in 2016. In the shopping mall, where the smell of paint mingles with that of the fresh Arab sweets on offer for the grand opening, a special room has been dedicated to his loss and contains pictures of the damage. Yousef accepted the church’s offer of help because he feels strongly about the Assyrian Christian heritage of old Mesopotamia. “Our heritage and our culture are here. We have been in this country longer than anyone else. It would be wrong to leave all that behind.”

Iraqi churches have long tried to keep their flock from leaving by pointing out that life would get more dangerous for those left behind if the Christian minority shrinks any further. But this argument lost its power when IS became the deadliest threat in centuries, and the past three years have seen pastors actively helping their people find safety abroad. Mouche refrained from mentioning this motivation for all the hard work he is putting into convincing people to come home. It’s about the historic and religious heritage of Iraqi Christians, he said. “It’s about faith, about bearing witness, about being a Christian here.”

His active approach has led to major differences between Qaraqosh and neighboring towns, where priests are advising Christians not to return because of the danger the Muslims who did resettle are said to pose. Only around 500 families have returned to nearby Bartella. Some of them would like to come live in Qaraqosh, but the bishop does not want them to settle here, saying, “They have to go back home. If they don’t, who will rebuild and who will protect them?” It is a vicious cycle that needs to be broken, he said. He is pointing aid organizations in their direction “so life will return there too.”

While Qaraqosh waits for the government to resume its responsibilities, the church has temporarily taken its place. But it cannot do much more than clear the rubble and rebuild, as investment is badly needed. It's a huge burden, the bishop admitted. “It’s a dilemma. Even abroad, the thought prevails that the church can handle it all easily enough. But the pressure is enormous and we still need a lot of help.”