In the predominantly Christian city of Qaraqosh, where almost one-third of the previous population returned after the liberation from the Islamic State, Women's House has been founded to assist and support displaced and vulnerable women. 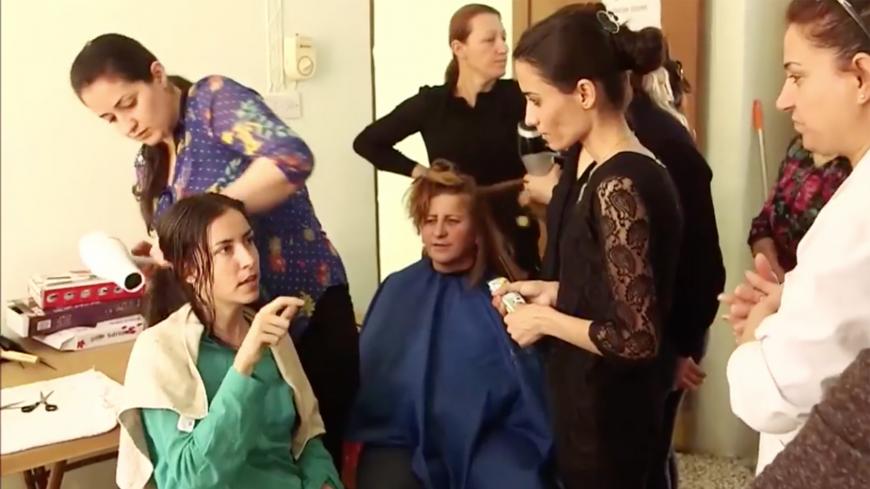 “What should I do at home all day?” Wassa Nimrud asked Al-Monitor. “I am coming every day to Beit al-Nisa and improving my skills in sewing.” Nimrud is one of the women attending training sessions to become a professional tailor. Her second home, after she was displaced in Iraqi Kurdistan during the Islamic State's (IS) three-year occupation, has become Beit al-Nisa, the Women’s House, in the Assyrian-Christian city of Qaraqosh, 25 miles south of Mosul in the Ninevah Plains.

Every morning, each room at Beit al-Nisa is full of women working — as cooks, tailors, hairdressers, professional trainers and students. In addition, women can enroll in language and computer classes. “Before [IS’] occupation, in our town we didn’t have a house for women,” Vivine Elias, the tailor and trainer, told Al-Monitor. “Now that the city is still half empty, at least we have our own place to work and learn. To be together!”

IS proclaimed its self-styled caliphate built on fear in Mosul in June 2014, and its occupation had spread to Qaraqosh by that August, where a minority of Muslims, mostly Turkmens and Shabaks, have always lived. “Qaraqosh’s citizens cannot forget that frightening night of Aug. 6, 2014, when the entire population fled when [IS] was advancing to take their city. We escaped, not knowing our destiny,” Nimrud said. “We lost everything, we ran away without anything.”

Half of Qaraqosh was destroyed. Churches and monasteries were desecrated, while public buildings, shops and private houses were looted and razed. Its citizens were displaced throughout Iraq and, by now, much of the world. Today, almost one-third of Qaraqosh’s pre-IS population has returned home. As commercial and community life is trying to resurrect itself, the Women's House was founded.

“The idea of a house for women was conceived spontaneously during our displaced life and in the displaced camps” Nival Nabil, one of the project’s coordinators, told Al-Monitor. “In the camps, people could not spend the whole day in the tents, especially during the summer where the temperature reached 45 C [113 F]. So women felt the need to reunite, to do social activities and organize themselves to work together.” Back in the camps, the Italian nongovernmental organization Focsiv listened to their requests, supported women’s activities and today manages the Women's House, employing women who steadily work there.

“Beit al-Nisa was inaugurated in Qaraqosh in November 2017, a year after the liberation from [IS],” Jabber Mustapha, Erbil’s Focsiv coordinator, told Al-Monitor. “Each training course lasts one month, 20 days a month, three hours per day. But this is not just a place for training, it’s a safe place to meet; for example, in the night women come and sit in the small court to speak.”

Women aged 18-45 can register at Women’s House and choose their training or activity. “At the end of each course, we offer the women a tool to continue to practice their skills at home, such as a sewing machine or kitchen’s tools to cook,” Nabil said. “Furthermore, we would like to invest some money to found a sort of cooperative where women manage their own shops.”

“Before the women’s center was born and before 2014, I used to work at home as a hairdresser,” Ruweida Atem said. “Now that I am teaching here, our dream is to open a salon in the town, which is still partly destroyed but in need of commercial activities.”

Muslims have also returned to Qaraqosh. Muslim women, together with their fellow Christians, are attending these training classes, hoping to start their own new activities in Qaraqosh. Sehmiya, 21, who belongs to the Shabak minority, said, “We were afraid as well when [IS] arrived and we escaped all together. This is our town and so we came back here.”

Another Muslim woman, Asimah, was displaced in southern Iraq, near Iran’s border, and only recently could come back home. “My neighbors, who are all Christian, told me about the Women’s House. My family agreed, and so I started a tailor class. I want to work and be independent.”

Although the Iraqi government claimed victory over IS in December 2017, the group's presence in the country in areas such as Ninevah, Anbar and Salahuddin provinces can still be felt. Terrorist attacks on a weekly basis in different provinces continue to shake Iraq, as security forces arrest IS members daily in Mosul.

Iraqi citizens are ready to work and rebuild their futures in a bid to stabilize Iraq, and women continue to play a major role investing their skills, expertise and qualifications to reunite hope.