Who will liberate Mosul?

The liberation of Mosul is complicated by its ethnic, religious and ideological pluralism. 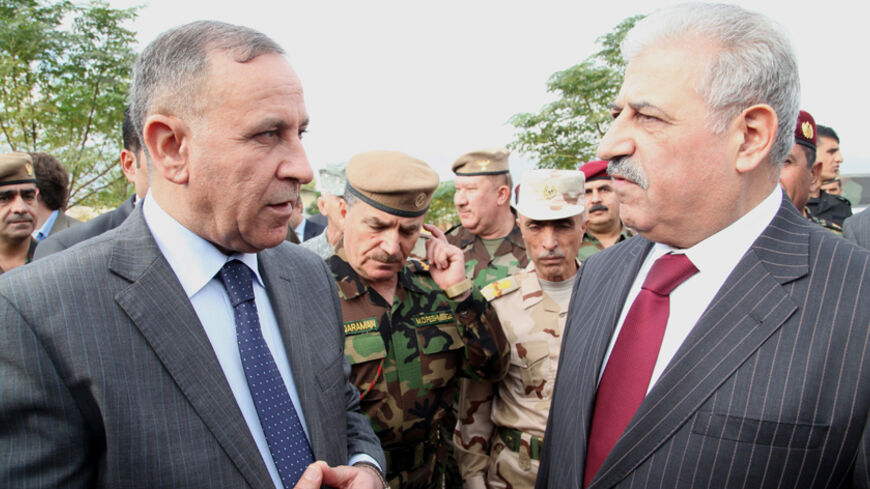 Atheel al-Nujaifi, the governor of Ninevah province, does not seem concerned by the criticism and calls to dismiss him after Mosul fell to the Islamic State (IS) earlier this year. Instead, Nujaifi appears intent on imposing himself as an essential player in the liberation of the city. He is currently visiting Washington to promote his vision of what needs to be done. Mosul's liberation, however, cannot be left only to Nujaifi’s efforts. It will require representation from all the city's ethnic, religious and sectarian communities.

Nujaifi's views on Mosul coincide with those of Turkey, which he thinks should play a key role in expelling IS, given its geographical location and historical relations. Nujaifi accompanied Turkish Prime Minister Ahmet Davutoglu on a Nov. 21 visit to a Kurdish peshmerga camp supervised by the Turkish army in Diana, in northern Erbil.

Following the visit, Nujaifi posted on Facebook the same day that he agreed with Davutoglu on Turkey training volunteers from Ninevah to fight IS like it is doing with its training of peshmerga. He also wrote, “We are waiting for the Kurdistan Region to locate the camp, and we will start registering the names of volunteers.” On Nov. 27, Nujaifi posted, “After we get the approval of the Kurdistan Region to open a camp for civilian volunteers from Ninevah — including tribes and residents of the province’s cities and all political parties willing to declare war against IS — we will start the practical steps and register the names of volunteers in Dahuk and Erbil. This effort will mainly focus on Arab societies, which must have a clear role in the liberation of their regions.”

According to Nujaifi, two camps have so far been established to train fighters: the Mosul Liberation Force and the Western Mosul Force. He said that the announced preparations for the liberation of the city represent only 10% of the actual steps being taken on the ground and between him and Iraqi and foreign officials. The reality, however, does not seem to reflect Nujaifi’s words.

Witnesses told Al-Monitor that the governor has been trying to bring together some police officers from refugee camps who had fled Mosul, but has not established a reliable force. The sources also said that he is waiting for the Iraqi government, Turkey or the United States for arms.

The problem with Mosul is that its demographic composition cannot readily produce local leaders capable of convincing people to organize and begin the push for liberation. Unlike in Anbar province, the tribal element is not an effective motivator in Mosul, and the words of clerics who fled the city are not heeded by many.

Mahmoud Hamadani, a professor of history, notes that there is not just one Mosul. He said that the city where IS is entrenched is home to old, established families. The people there do not hold clan titles, but familial ones. Hamadani further explained to Al-Monitor, “There is also rural, peripheral Mosul, which is inhabited by tribes. This Mosul is often far from being affected by the environment of the city. This is why it was easy for IS to lure many of its residents, while the majority of the displaced from Mosul are city residents.”

He also said, “There is Kurdish, Christian, Shiite and Turkmen Mosul, and IS has sought since the early days to eliminate it through the killing and displacement of Turkmens, Shabak Shiites, Christians and Yazidis.”

Ninevah province, whose cultural and historical essence is represented by Mosul, is geographically and demographically divided. Shiite Turkmens live in northern Mosul, in Tal Afar; Yazidis reside in the west; Christians, Shabak and Kurds share the east; and Muslim Arabs occupy the city center, to a lesser degree its southern provinces and villages as well as villages and towns where other denominations and ethnic groups have also settled.

The current thinking among Iraq’s Sunnis is that the liberation of the Sunni areas will only take place through the efforts of Sunnis themselves. This is also the position of the United States and supporters in the region. Negotiations underway among Sunni leaders in Washington involve tribal leaders, government officials and representatives of armed factions and revolve around the formation of a Sunni army, possibly armed by Baghdad.

The Iraqi government's perspective on liberating Sunni areas remains unclear, but it is increasingly relying on the Popular Mobilization Forces, which consist of Shiite factions whose role is proving sensitive among the residents of the areas in question. IS is increasingly exploiting abuses committed by some elements of the Shiite factions, trying to frighten Sunnis of being killed or intimidated in the event Shiite forces enter their areas. In this respect, IS is also presenting itself as the best alternative, the Sunnis' protector and avenger.

Amid the confusion and ambiguity surrounding the search for Sunni representatives able to lead the battle against IS, Washington hopes to test the waters by bringing together Sunni parties under a logically acceptable umbrella, the assumption being that the end of IS will be achieved when the social and cultural Sunni environment favorable to the group ceases to be.

All of this is understandable in the context of the war and the search for allies, but the missing link lies in the differences among Sunni areas. Anbar’s style of liberation, in particular the city of Fallujah — whose restoration would mark the beginning of the defeat of IS — must differ from Salahuddin's mode of liberation, while Mosul differs from these two cities in its demographic complexities.

Thinking that pre-IS Mosul can return is not logical for the foreseeable future. The challenge represented by IS and the crimes committed under it have instilled a great deal of doubt and led to lots of accusations among Mosul residents, not only at the ethnic, sectarian and religious levels, but also among the Arabs of the city and those of the periphery. Excluding direct US military intervention and rehabilitation of the Iraqi army in a short period of time, the Mosul liberation mission requires the involvement of all the inhabitants of the city regardless of their ethnic, religious and ideological differences. This could happen within the framework of a special military arrangement enabling all parties to control their areas and manage and protect them in the future.