Iraqis already arguing over land they haven't yet freed from IS

As efforts advance to liberate Mosul, the capital of Ninevah province, disputes are brewing over proposals to divide up the governorate. 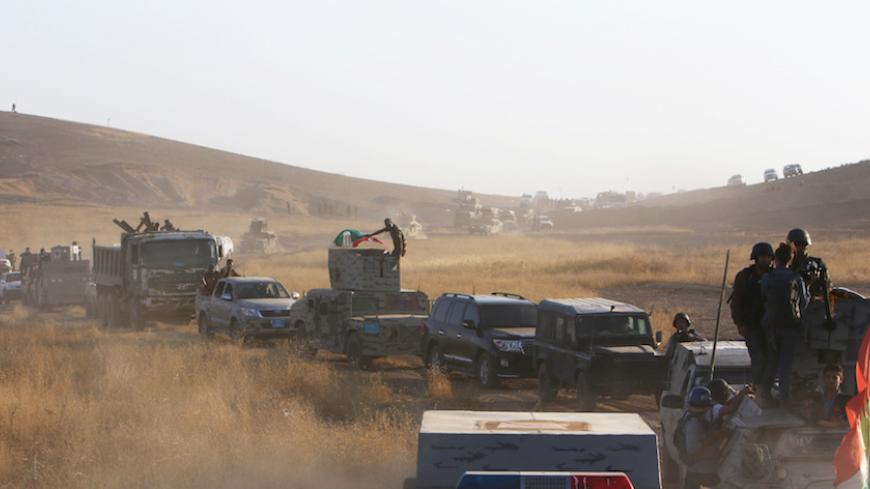 BAGHDAD — If forces in Iraq succeed in liberating Ninevah province and its capital, Mosul, from the Islamic State (IS), many observers fear conflicts are likely to ignite over disputed areas and their management — and to pose a threat to minorities as well.

People of many different ethnicities, religions and sects reside in the province, including Arabs, Kurds, Sunnis, Shiites, Sabians, Yazidis, Shabak and Christians.

Mosul has been under IS control since June 2014. As the liberation effort grows, the controversial idea of dividing up Ninevah province has started to circulate. On Sept. 9, Atheel al-Nujaifi, the former Ninevah governor, told the Turkish Anadolu Agency, “A project is underway to divide Ninevah into six or eight provinces, which the local population will be determining.”

The State of Law Coalition, led by Nouri al-Maliki, also accused Kurdistan Regional Government (KRG) President Massoud Barzani of seeking to expand his influence by taking over some parts of Ninevah province.

Former press officer of the Kurdistan Democratic Party (KDP) Srou Kader said Sept. 9, "Barzani has suggested that Ninevah province be divided into three provinces and that a referendum be held in these provinces for the people to vote in favor or against the annexation of the provinces to Kurdistan.” Yet he did not reveal the details of Barzani’s proposal in terms of the timeline and to whom it was submitted.

Ninevah's proximity to Iraq's Kurdistan region has prompted Iraqi political parties to express fears that Kurdish peshmerga forces will remain in the liberated areas in Mosul. The peshmerga forces are trying to reduce these fears, saying they will leave once the IS threat is over.

On Sept. 17, Iraqi National Security Adviser Faleh al-Fayad told the press, “Ninevah is a cornerstone of the Iraqi state, similarly to Basra and other provinces. Its liberation from terrorism will pave the way for understandings to be reached between all political parties, and the talk of its partition is a mere illusion.”

Nevertheless, there have been reports that KRG peshmerga forces have managed to liberate northern parts of Ninevah that are close to Kurdistan and are pushing to have these areas’ administrative units correlated to its government.

Arab Iraqi politicians opposing the Kurdish policy — such as Nahla al-Halabi, a parliament member from Ninevah — say the KDP, led by Barzani, wants to divide Ninevah into eight provinces, half of which would be affiliated with the KRG and the other half with the federal government in Baghdad.

Abdul Rahman Alliwayzi, a parliament member from Ninevah, accuses the KDP of preventing Arabs from returning to their liberated villages in the province. This has increased fears that the peshmerga plans to remain in areas under its control to achieve the demographic change that will help Kurds expand geographically.

Another aspect related to the idea of dividing Ninevah is the protection of minorities, their rights to manage their areas formally and the formation of military forces to secure them. Conflicting political parties sometimes exploit this subject to pass political agendas.

Alliwayzi told Al-Monitor, “Massoud Barzani is looking for valid reasons to remain in parts of Ninevah province and annex them to the Kurdistan region, under the pretext of protecting minorities and ending the IS threat. In fact, it is about Barzani’s [expansion] ambitions.”

Referring to the former provincial governor Nujaifi, Alliwayzi added, “Parties that are politically bankrupt in Ninevah province are helping Massoud Barzani implement his divisive project that will only work when a demographic change is brought about and people are relocated," because currently the areas' populations are so diverse.

Rian Chaldean, a Christian leader of the Popular Mobilization Units hailing from Ninevah province, warned against attempts to divide the province and its administrative units.

Chaldean said, “We will not allow another occupation; there is no understanding, harmony or exchange of services with IS.”

Others have pointed out that the idea of dividing Ninevah into eight provinces is impractical, as some areas might lack demographic and economic capabilities.

Al-Jazeera recently created a Twitter poll on the idea of dividing Ninevah. Poll results showed that 80% of the 3,000 participants were against dividing the province and believed it would lead Iraq into conflicts that would result in other provinces being partitioned.