Arab disputes over leadership and relations with Baghdad and the Kurds, as well as Kurdish disinterest in defending Sunni Arab territories, are complicating efforts to defeat the Islamic State in a highly fragmented Iraq. 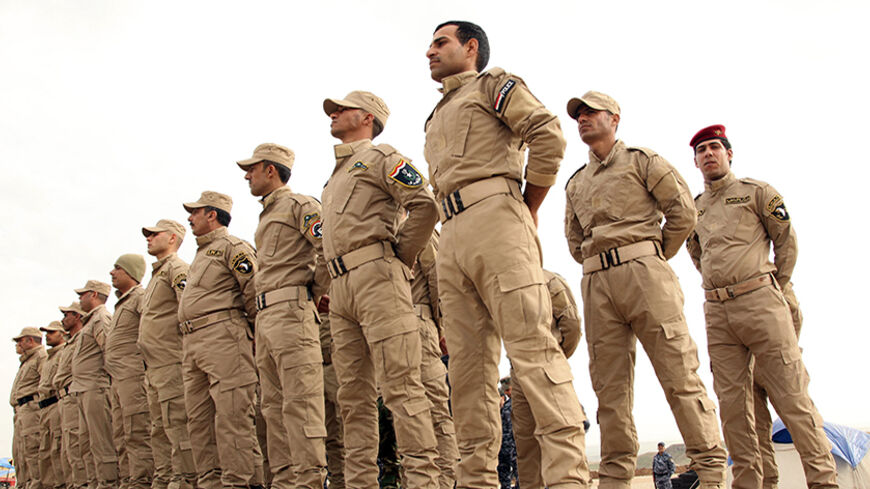 Sunni volunteers from Mosul take part in military training as they prepare to fight militants of the Islamic State on the outskirts of Dahuk province, Dec. 8, 2014. - REUTERS/Ari Jalal

Plans to liberate Mosul, a key stronghold of the Islamic State (IS), are gaining momentum in Iraq. Many Sunni Arabs who initially tolerated IS are now seeking revenge for its killing families and friends and confiscating their property. Sunni Arab forces are being organized, trained and armed in Erbil to counter IS with the cooperation of the Iraqi federal government, the Kurdistan Regional Government (KRG), the Mosul provincial council and the US-led coalition. Still, this effort is complicated by intra-Sunni Arab disputes over leadership and relations with Baghdad and the Kurds, as well as Kurdish disinterest in liberating and protecting Sunni Arab territories. These disputes highlight the challenges of not only degrading IS, but stabilizing Mosul in a highly fragmented Iraqi state.

Most local populations brutalized by IS want to liberate Mosul. Those who have thus far joined the Sunni Arab force are mainly displaced Mosulawis residing in the Kurdistan Region and organized by Atheel al-Nujaifi, Ninevah province governor “in exile.” Nujaifi not only wants to re-secure his political position and Mosul city, but establish and lead a larger Sunni Arab region like the Kurdistan Region. Nujaifi has advanced his political agenda with backing from Turkey, Saudi Arabia, the Iraqi Ministry of Defense and Iraqi Kurdistan President Massoud Barzani.

The problem is that Nujaifi has lost significant local support from Mosulawis and is not representative of the powerful Sunni Arab streets. Arab members of the Nahda (Renaissance) bloc, which controls about 20 of the 39 seats on the Mosul provincial council, have called for Nujaifi’s dismissal. The Nahda bloc also boycotted the meeting held last month in Baghdad with Iraqi Prime Minister Haider al-Abadi because of Nujaifi’s presence. Many hold Nujaifi responsible for "losing Mosul" and supposedly maintaining relations with IS — an issue lately debated on the influential national al-Baghdadia television program. The Iraqi general public is also demanding that Nujaifi’s brother, current Iraqi Vice President Osama al-Nujaifi and former Iraqi Prime Minister Nouri al-Maliki be taken to court because they "gave half of Iraq to IS."

Ironically, the only real support for Nujaifi on the Mosul council is from the Kurds, largely from Barzani’s Kurdistan Democratic Party. Barzani may realize that Nujaifi is politically weak and a better Sunni Arab official to negotiate Kurdish interests and the disputed territories. Similarly, the Kurds have 16 seats on the Mosul council and the Kurdish vote can potentially help Nujaifi retain the governorship. Ascertaining Nujaifi’s position could also benefit Barzani and Turkish Prime Minister Recep Tayyip Erdogan by facilitating joint commercial and energy development projects between Mosul, the Kurdistan Region and Ankara.

These overlapping interests and political divisions were evident at the Sunni Arab conference in Erbil to devise a common strategy against IS. While Sunni Arab representatives such as the Nujaifi brothers and former Iraqi officials Rafa al-Issawi, Tariq al-Hashemi and Adnan al-Dulaimi — those issued an arrest warrant by Maliki — participated, other influential Sunni Arab leaders refused to attend. Absent were head of the Shammar tribe in Mosul Abdullah Yawar, the Iraqi Council of Tribes, the Arab political council in Kirkuk, Iraqi Parliamentary Speaker Salim al-Jibouri and Salahideen Governor Raid Jibouri, to name a few. Iraqi officials that did not attend also criticized the conference as a Muslim Brotherhood event sponsored by Turkey and/or a meeting ground for terrorists.

Mustering an effective force to liberate and stabilize Mosul is also challenged by competing Sunni Arab political projects. While Nujaifi aims to create a distinct Sunni Arab region, other Sunni Arab leaders have different ideas for governance in Iraq. Some seek to establish individual regions linked to each province, others support renewed federal government authority and modification of the constitution and still others demand a strengthened Iraqi government that can provide weapons and revenues to outlying areas. These competing agendas challenge not only Nujaifi’s leadership but Sunni Arab engagement that is crucial to the anti-IS campaign.

Arab-Kurd tensions are feeding on these divisions. While alliances of convenience have been established between some Sunni Arab tribes, officials and KRG leaders, most Sunni Arabs oppose the Kurdish nationalist agenda despite the KRG’s open humanitarian and asylum policy. The anti-IS campaign has also reinforced political distrust between Arabs and Kurds, particularly as Kurds are perceived to benefit most from coalition military support to re-secure disputed territories and resources. Many Kurds are reticent or unwilling to lead the Mosul liberation knowing that their peshmerga are unwelcome by Mosulawis. Sensitivities between Arab and Kurdish nationalism were exposed on Kurdish Flag Day, when hostilities broke out at Kirkuk University after Kurdish students displayed the Kurdistan Regional flag, which elicited Arab students’ anger.

These power struggles will likely constrain efforts to effectively liberate Mosul and secure the province after IS is degraded. They underline the need to address the localized conflicts in which the IS threat has been superimposed, and the secondary consequences of the anti-IS effort on these disputes. To this end, external military support should aim to minimize political, resource and territorial tensions between groups and across regions. Additional attention should be given to how and by whom Sunni Arab regions and the disputed territories will be governed and stabilized. This effort requires support of the Iraqi government to develop Mosul and other Sunni Arab provinces, enhance decentralized administration and establish pacts between local militias and the Iraqi security forces to secure localities and borders.