Reports of Ninevah province Arabs fighting with the Islamic State are contributing to anti-Arab sentiments among Iraqi Kurds. 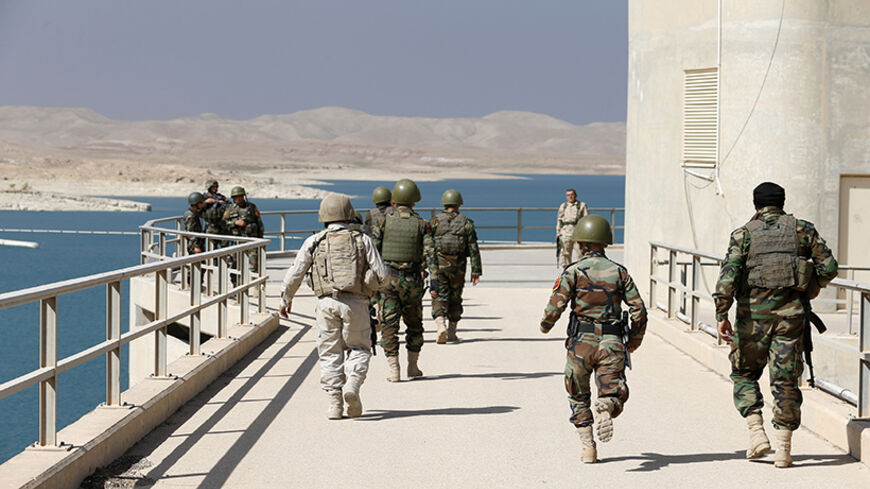 Peshmerga fighters walk on Mosul Dam in northern Iraq, August 21, 2014. Iraqi and Kurdish forces recaptured Iraq's biggest dam from Islamist militants with the help of US airstrikes to secure a vital strategic objective in fighting that threatens to break up the country, Kurdish and US officials said on Monday. - REUTERS/Youssef Boudlal

Targeted US military strikes in coordination with Baghdad and Erbil have helped push back the Islamic State (IS) in Iraq’s Mosul area, at least for now. This military aid coincides with attempts to choke the extremist group’s revenue sources and create a political system that reconciles Shiites, Sunnis and Kurds. These efforts are complicated by the very nature of the IS threat in Iraq, which is a reaction by Sunni Arabs not only to former Iraqi Prime Minister Nouri al-Maliki's sectarian policies, but also to the entire post-2003 order. This includes territorial and resource claims made by the Kurdistan Regional Government (KRG) in disputed areas. Stabilizing Iraq in the face of IS will ultimately require a deal not only between Baghdad and Erbil, but also among Iraqi Arab, Kurdish and other minority group leaders over boundaries and the revenues and resources linked to them.

Embedded within IS are former Baathist military officers, Ansar al-Sunnah, Jihad and Reform Front groups, Jash al-Islam and other radical factions. While these alliances are unlikely to revive pan-Arab nationalism or be sustained by the divided Sunni Arab community, they reflect a broader revival of the insurgent Jaysh Rijal al-Tariq al-Naqshabandi (JRTN) and its weddedness to Islam, Arab nationalism and Iraqi territory. IS has explained its takeover of some Kurdish regions as part of its desire for land it claims to be part of its proclaimed caliphate, and it described its recent offensives in Sinjar and Jalalwa as efforts to take back disputed territories that the KRG has controlled since 2003 and which it contends is “not a part of the Kurdistan region.”

IS's penetration into Ninevah and the disputed territories reflects competing nationalist politics alongside radical sectarianism. The Ninevah plain is not only the homeland of the Assyrians and populated by Arab, Yezidi, Kurdish, Turcoman and Shabak communities, but it straddles Mosul, the heartland of Sunni Arab nationalism in Iraq and Saddam Hussein’s former military officers. Ninevah province borders Dohuk and Erbil governorates in the Kurdistan region, which are controlled by Massoud Barzani, president of the KRG and leader of the Kurdistan Democratic Party (KDP). Ninevah province contains important oilfields and the Mosul Dam, both key to critical energy production.

Since 2003, securing the Ninevah plain has been a Barzani priority, reflecting the KRG’s desire to finalize the status of the disputed territories (as per Article 140 of the Iraqi constitution) and differentiate the Kurdistan region from Arab Iraq. This effort has involved reappropriating and "Kurdifying" lands; providing security, jobs, and services to local populations; and signing contracts with international oil companies for Ninevah and other disputed areas. It has also involved reframing Kurdish identity based on being "Kurdistani" citizens — those who live inside the Kurdistan region and the disputed territories — and claiming the pre-Islamic Yezidi community as authentic Kurds despite discrimination against them. Kurdifying the territories has also been encouraged by the political and security vacuum in post-2003 Iraq and Baghdad’s failure to implement Article 140.

While these territories and populations have been targeted by al-Qaeda groups since 2003, they became IS battlegrounds after the Mosul coup in June, when the Iraqi Security Forces withdrew from the disputed areas, and the KRG peshmerga moved deeper inside, at least until they were pushed back by IS days ago. These territorial battles can also be seen as IS’s attempt to settle scores with Iraqi Kurds and return borders to their pre-1991 status. The territories can be viewed as part of a caliphate, a unified Iraqi state, or a distinct Sunni Arab region within a federated Iraqi state.

In addition to reconfiguring borders and terrorizing populations, the IS threat is stirring tensions between Arabs and Kurds. As Iraqi Kurdish society responds to IS-generated violence and reports emerge that Sunni Arabs have assisted IS against the peshmerga, anti-Arab rhetoric is becoming highly salient. Some Iraqi Kurds have staged anti-Arab protests and are blaming internally displaced Arabs for the higher prices, limited goods and increased rents in the region, frustrations fueled by not having received salaries for months. Tightened security measures in the Kurdistan region also have resulted in greater restrictions against Arabs seeking to enter, live and work there. Local sources indicate that the Sulaimaniyah administration has changed its residency policy toward Arabs, requiring them to leave passports and identification cards with the Kurdish security office (Asayesh).

The KRG has reacted to these trends by warning that it will arrest anyone expressing anti-Arab sentiment and has prevented some protests altogether. The KRG, in particular Barzani, continues to maintain political and commercial ties with some moderate Sunni Arab officials, former Baathist officers and Sunni Arab tribal leaders, many of whom have taken refuge in Erbil. Mosul Governor Atheel al-Nujaifi has appealed to Sunni Arab groups to coordinate with the Kurdish peshmerga against IS as part of a Mosul battalion.

Still these measures have not affected the presence and strength of radical Sunni Arab nationalists in IS. Nor have they penetrated the political distrust between Arab and Kurdish groups rooted in the legacies of Baathism, tribal identities and local politics, which often transcends sectarianism. After the Mosul Dam was re-secured in a joint Baghdad-Erbil operation supported by US military strikes, a fight broke out between the Kurdish peshmerga and Iraqi brigades when the latter raised an Iraqi flag at the dam. These tensions are unlikely to dissipate in the near future. Their source — control over borders, territories and resources — should be acknowledged by any strategy that seeks to weaken the IS threat and stabilize Iraq.