As Iraqi Kurds benefit from coalition airstrikes and take control of former IS safe havens, they are aggravating tensions with some Sunni Arab communities. 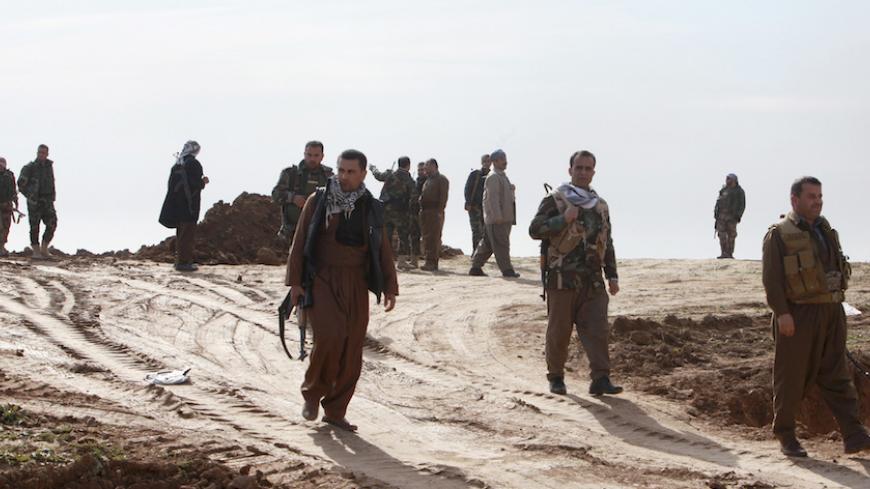 Kurdish peshmerga fighters are seen during the battle with Islamic State militants on the outskirts of Mosul, Jan. 21, 2015. - REUTERS/Azad Lashkari

US-led efforts to counter the Islamic State (IS) with Kurdish peshmerga partners is having a backlash on Sunni Arab communities. Relying on Iraqi Kurds to act as coalition boots on the ground may help eliminate some IS safe havens, but it is fueling Kurdish land grabs. Iraqi Kurds are using US airstrikes and the political vacuum in northern Iraq not only to push back IS, but also to recapture the disputed territories and oil fields — some of the very measures that have fueled Sunni Arab resentment since 2003. These trends are undermining the effort to assuage Sunni Arab grievances and laying the groundwork for Iraq’s next protracted, subnational conflict.

While minorities and "apostates" have been brutally victimized by IS, Sunni Arabs have become primary targets in local anti-IS campaigns. In some areas, Shiite militias have retaliated against Sunni Arabs through kidnappings, killings and forced population displacements. The militias remain stationed in Iraq’s disputed territories, which they helped liberate alongside Kurdish peshmerga, Iranian Quds Forces and the Iraqi Security Forces (ISF). Their engagement reflects Iranian influences in Iraq and disputes between Baghdad and Erbil that preceded the IS onslaught, and which are feeding local tensions.

Similarly, as Iraqi Kurds benefit from coalition airstrikes and take control of former IS safe havens in northern Iraq, they are engaging in demographic and territorial engineering to advance their nationalist agenda. Kurdish peshmerga are preventing Sunni Arab populations from returning to their homes while attempting to Kurdify these territories. The peshmerga’s offensives in Diyala, Kirkuk and western Mosul are particularly confrontational because they expand the Kurdish presence into areas outside the Kurdistan Region and considered part of Iraq by all Arab Iraqis.

By expanding its territorial borders, the KRG may hope to leverage its nationalist demands in Baghdad. In fact, current political conditions leave the Iraqi government little opportunity to retaliate. The ISF cannot effectively push back the Kurdish peshmerga, the KRG has Western military support and Baghdad is cooperating with the KRG in the anti-IS campaign. Both sides are also financially stressed and relying on a temporary oil deal to mitigate their economic morass.

The security problem, however, is not whether Baghdad can thwart Kurdish territorial expansionism. In the weak and hyper-fragmented Iraqi state under IS threat, Kurdish unilateral land grabs directly challenge the aims of disenfranchised Sunni Arabs who seek greater autonomy and their own region, and who remain committed to Iraq’s territorial boundaries. These actions also place Iraqi Kurds in direct confrontation — once again — with Sunni Arabs who largely populate northern Iraq, alongside minority groups. Many regard these territories as the homeland of Sunni Arab nationalism and Sunni Islam in Iraq. Assyrians consider the Ninevah plains as their own heartland and not necessarily Kurdish territory or belonging to the KRG.

While Iraqi Kurds may regard their territorial push as a necessary security measure, it is aggravating tensions with some Sunni Arab communities. In a recent news conference in Baghdad, Minister of State for Provincial Affairs and member of the Iraqi parliament Ahmed al-Jabouri accused the Kurdish peshmerga forces of destroying 700 homes in Jalawla after a battle with IS and "denying the return of Arab residents in localities where IS has been expelled.” Sunni Arab parliamentarians from Ninevah province have publicly criticized the Kurdish peshmerga for their “scorched-earth policies that have caused the displacement of Arab villagers under the pretext of fighting IS.” Sunni Arab groups are also resentful of what they perceive as preferential coalition protection and support of Kurdish regions in the anti-IS campaign.

These trends have implications for the coalition’s anti-IS strategy and regional stability. Arming and training the Kurdish peshmerga in cooperation with the Iraqi government certainly supports the effort to counter IS; however, reinvigorating the deep-rooted conflict over disputed territories does not. By providing weapons to the KRG unconditionally and without corresponding support to Sunni Arab groups that oppose IS, the coalition is unintentionally shifting the balance of power in northern Iraq. Left unchecked, these measures will encourage a Sunni Arab backlash in the territories and the Kurdistan Region. The current strategy also risks alienating Sunni Arabs, whose support is essential to the anti-IS campaign.

Redrawing the Iraqi map with guns is a recipe for future disaster. If US policymakers and military planners want to rely on local partners to degrade and ultimately destroy IS, then they should also understand the complicated local dynamics tied to these alliances and the secondary consequences for strategic objectives. Given the significant political shifts underway, disabling IS and stabilizing the region will demand preparations for a post-IS Iraq that will regrettably be marked by subnational battles over borders, territories and resources, with or without Baghdad.