The Ninevah Provincial Council has chosen a new governor close to the Shiite-dominated Popular Mobilization Units, prompting objections from many Sunnis. 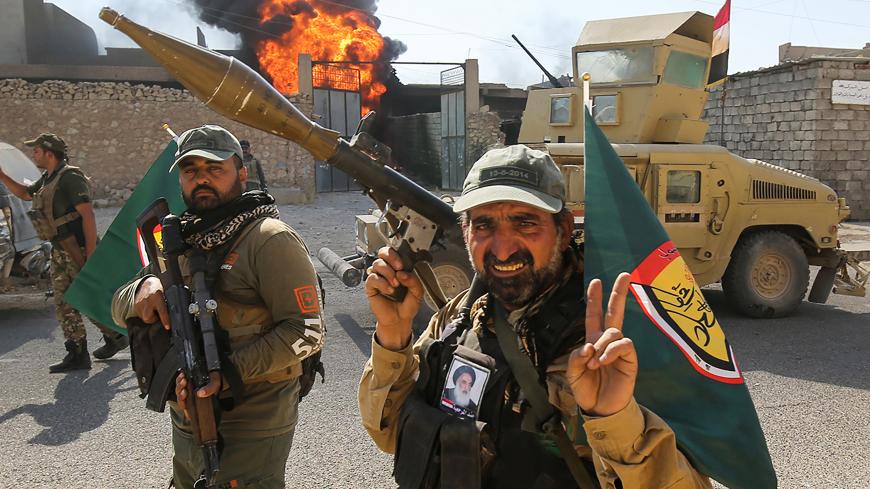 Fighters of Hashed al-Shaabi (Popular Mobilization Units) flash the victory sign as they advance through a street in the town of Tal Afar, west of Mosul, Iraq, Aug. 26, 2017. - AHMAD AL-RUBAYE/AFP/Getty Images

BAGHDAD — A heated gubernatorial election in Ninevah province has fired up division in Iraq's parliament, riling members of its largest Sunni alliance and portending changes in some key positions.

Out of the 39 members of the Ninevah Provincial Council, 28 voted May 13 to elect Mansour Marid as the new governor to succeed Nofal al-Akoub (also known as Nawfal Hammadi). The Iraqi parliament had dismissed Akoub after an overloaded ferry sank in March, killing about 100 people. He was accused of negligence and corruption.

Marid is a Sunni parliament member representing the Ataa Movement, headed by Falih al-Fayyad, who is also chairman of the mostly Shiite Popular Mobilization Units (PMU). Marid was elected after laborious negotiations between Shiites and the Kurdistan Democratic Party (KDP), headed by Massoud Barzani. The vast majority of Iraqi Kurds are Sunni Muslims. As a result of the negotiations, it was generally agreed that Marid’s first deputy would be Kurdish, and Sirwan Mohammad was elected.

The Halbusi and al-Hal blocs, headed by Jamal al-Karboli, supported the nomination of Ninevah council member Hussam al-Abbar for governor. However, the head of the Arab Project, Khamis al-Khanjar, and the leader of the National Axis Alliance, Ahmad al-Jubouri, supported Marid's nomination.

The alliance said on its website it wants a more poised and stable figure. The Baghdad Post cited undisclosed sources who said Halbusi's critics consider him incompetent.

But Halbusi announced May 13 he was leaving the National Axis Alliance and forming a new Sunni bloc of 32 parliament members called the Iraqi Forces Alliance. He called on the Supreme Anti-Corruption Council to launch an investigation into Marid's election on suspicion of corruption in the electoral process.

According to Iraqi Forces Alliance parliamentarian Raed al-Dahlaki, the situation doesn't mean any Sunni party will be left out of the Construction Bloc led by Hadi al-Amiri. The bloc was initially formed to be the biggest parliamentary bloc constitutionally tasked with electing a prime minister. But Dahlaki told Al-Monitor, “The Iraqi Forces Alliance is the largest bloc representing the Sunni provinces liberated from the Islamic State (IS). It is their true representative, and it's unlikely Halbusi will be replaced [as parliament speaker].” He also said the courts should investigate the Ninevah gubernatorial election to reveal any underlying corruption.

Naturally, the dissolution of the Sunni alliance in parliament will affect other alliances in Baghdad, especially the Shiite ones. Halbusi's Iraqi Forces Alliance seems close to the Reconstruction and Reform Alliance led by Muqtada al-Sadr, who rejected Marid's election and demanded May 13 that the Ninevah Provincial Council be disbanded. He said disputes behind the scenes over provincial positions are impeding efforts to improve conditions for the inhabitants of war-torn Ninevah. He was referring to the agreement between Ataa and the KDP.

According to former Ninevah parliament member Abdul Rahman al-Louizi, the price of that will be the return of Kurdish peshmerga forces to the disputed, oil-rich Kirkuk province and a battle for the governor's position there. Arabs and Turkmens want that office, and there are even disputes for it between the Kurdish parties — the KDP and the Patriotic Union of Kurdistan (PUK).

Klawisz Ali, a member of the Ninevah Provincial Council, told Nas News on behalf of the PUK, “The KDP trampled over all political agreements and [hijacked] the position of the first deputy of Ninevah's governor, although the position should have been for the [PUK].”

Ninevah province parliament member Hanin al-Qado told Al-Monitor, “The situation in Ninevah is complicated. If the political disputes continue, the security situation will deteriorate, especially if the president refuses to approve of the new governor or accept the appeals of objecting parties.”

Qado noted that the solution in Ninevah, after the resurgence of terrorist cells, would be to isolate the local administration and form an emergency government with military leadership to prevent the return of IS.

Ninevah is still the target of IS attacks, the most recent of which hit the villages of west Mosul May 18. The PMU blamed the Mosul Operation Command for this security breach, which killed four people and damaged private properties.

The PMU redeployed its forces in Ninevah and revealed a new security plan. The movement denied news that it had retreated from western Mosul, despite previous calls to expel it mainly voiced by former Deputy Prime Minister Saleh al-Mutlaq in April.

The PMU’s presence in Ninevah and the election of a governor close to its leaders pushed Athil al-Nujaifi, another dismissed former Ninevah governor, to tell Russia Today, “Iran has completed its infiltration in Mosul.” His brother, former parliament Speaker Osama al-Nujaifi, said the new Ninevah governor is controlled by Iran, tightening its grip on the province. He also told the Iraqi al-Sharqiya newspaper, “We will continue to defend Mosul’s Arab identity.”

The current Sunni division will lead to new parliamentary alliances or understandings between Nujaifi’s blocs (the Reform Alliance) and Halbusi and Karboli (the Construction Alliance). These will affect the final form of the still-incomplete federal government and might cause a power imbalance in favor of Sadr’s Reconstruction and Reform Alliance. Sadr has repeatedly implied that he intends to change the government. The division will turn Mosul into a field for settling accounts until the local elections are held. However, federal authorities won't be able to organize the elections amid the current security threats and finger-pointing.