An arrest warrant has been issued for the governor of Ninevah province, of which Mosul is the capital, following a ferry accident that killed nearly 100 people. 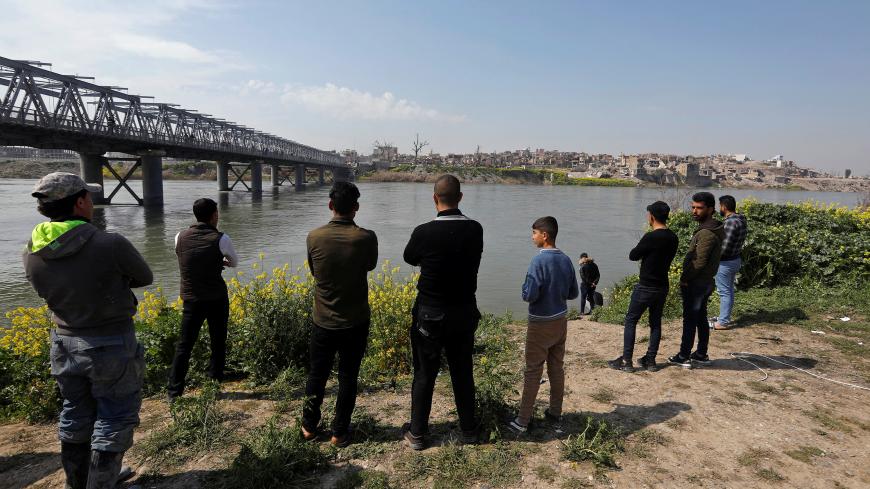 Iraqis gather near the site where a ferry sank in the Tigris River in Mosul, Iraq, March 23, 2019. - REUTERS/Khalid al-Mousily

The Iraqi Supreme Judicial Council issued an official order to the Erbil Appeals Court on April 8 to implement an arrest warrant for the former governor of Ninevah province, Nawfal al-Akoub. A conflict over the post of governor ensued in the city of Mosul, which is at the heart of Ninevah province.

The Iraqi parliament voted March 24 to dismiss Gov. Akoub from his post after a ferry accident in Mosul killed nearly 100 civilians. An arrest warrant was promptly issued for Akoub.

Nevertheless, Akoub has not been arrested, although authorities in the Kurdistan Region have already arrested others implicated in the ferry accident. Tareq Nuri, the head of the Erbil Asayish, or security forces, said that his directorate is waiting for the arrest warrant to be delivered from the Ninevah courts to Erbil.

With the goal of warding off a power vacuum in Ninevah, Prime Minister Adel Abdul Mahdi set up a crisis management cell March 22 to run the province’s affairs.

Abdul Mahdi’s appointment of a crisis cell is entirely legal. He is aware that the provincial council's term expired in June 2018, and local elections are delayed, according to legal expert Tariq Harb.

Abdul Mahdi said at his weekly press conference, “Setting up a crisis management cell is less than an ideal solution. Yet multiple gaps would be found in all other solutions. This one, however, prevents any political and security vacuum and, subsequently, a breakdown of security in the province.”

His statement would indicate that he has knowledge that such a vacuum would be exploited after the governor's dismissal. The appointment of Maj. Gen. Najim al-Jubouri, the commander of Ninevah military operations, as a member of the cell is proof in this regard.

Idhawi Soaeb, a member of the Ninevah Provincial Council, shared the same concerns. "It is a serious situation in the Ninevah province," he told the press, "and this conflict could affect the security situation that we are warning against.”

Several members of the Ninevah Provincial Council have questioned the work of the cell. They believe it is working in the absence of mechanisms and a clear mandate. They also anticipated that the governor’s dismissal will lead to a delay in the payment of employees’ salaries.

Fallah Zeidan, a member of parliament for Ninevah, suggested that a state of emergency be declared in the province and a military governor be appointed. The problem in Ninevah, he said, resides in “the presence of economic bureaus affiliated with the Popular Mobilization Units (PMU) and some armed political parties.”

Yahya al-Kubaisi, a consultant for the Iraqi Center for Strategic Studies, told Al-Monitor, “The Mosul misfortune is more complicated than the matter of dismissing the governor. It is a severe social conflict engaging the city’s center and outskirts. The political crisis in Ninevah is sharp. It does and will continue to becloud Mosul for the foreseeable future.”

He continued, “Abdul Mahdi’s decision is a new administrative shift in the province, particularly since the cell’s head was given the powers to manage the province’s affairs. The process to select the governor will open the door wide to the corrupt parties opting for a governor.”

The crisis the Ninevah Provincial Council is facing is not new, as it is familiar to many of Iraq's local governments. A governor cannot be selected unless there is agreement among the council's political blocs.

Ali Aghwan, a professor of international relations at al-Bayan University in Erbil, told Al-Monitor, “Political shifts in Mosul could take place only when the economic bureaus loosen their grip. … The current conditions are suitable for the crisis cell to make new political shifts.”

He continued, “There are plans to dismiss directors of four important service provision institutions in Mosul. Yet there will not be deep shifts at the political level, considering that [access to] posts in Ninevah is subject to the general political framework of Iraq.”

A recent indicator of the political shift in Mosul is the media confrontations between Sunni politicians and PMU factions. Members of parliament for Mosul have demanded that the PMU leave the province. In response, parliamentarians whose parties have armed factions in the PMU state that “those demanding that the PMU leave Ninevah province are trying to cover up their thefts out of fear that the PMU will unveil them.”

Maj. Gen. Jubouri spoke on March 29 about changes in the province’s institutions, which will be adopted in accordance with the powers that Abdul Mahdi entrusted to the cell.

The crisis cell is currently seeking to replace the heads of city services like electricity and water working in Ninevah province, specifically in Mosul, with independent figures. It is seemingly a prime opportunity for the cell to take such measures in light of the federal government’s support.

Atheel al-Nujaifi, the former governor of Ninevah province, said March 31, “The state’s departments' administrative and employment structures in the province, which are nearing collapse, are being rebuilt at this phase.”

Ninevah province is currently facing its greatest political and security challenge since it was under the rule of the Islamic State. In the past, Iraqis have been fearful of such challenges in the post-Islamic State era. Akoub himself warned on March 14 against the dangers of the Islamic State's return to the province.