As the death toll of the sunken ferry hits 120, protests against corruption might lead to a backlash in Mosul, and the Iraqi parliament has voted to dismiss Ninevah province's governor. 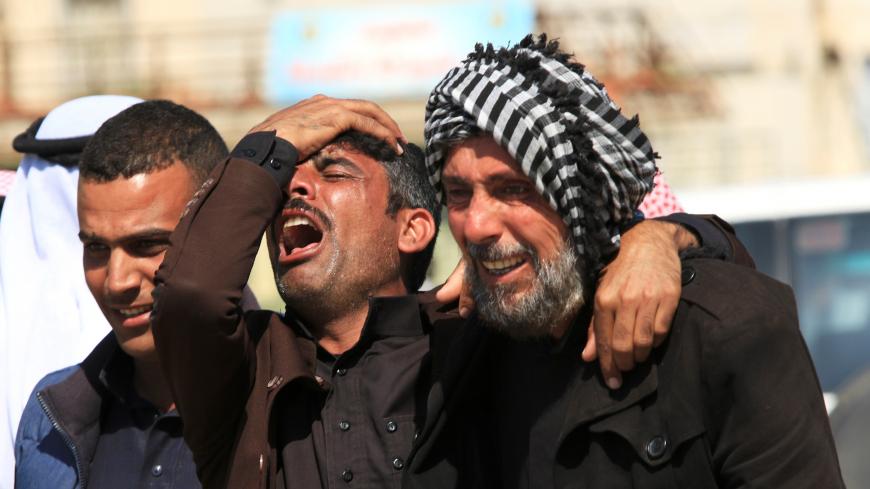 Relatives of victims of a ferry that sank in the Tigris River cry outside the morgue in Mosul, Iraq, March 22, 2019. - REUTERS/Ari Jalal

On March 21, thousands of Mosul residents flocked to Um El-Rabe'ayn Island, a touristic area about 4 kilometers (2.5 miles) north of the city center, to celebrate Nowruz, Mother's Day and spring, unaware that the festival would turn into another rendezvous with death in this war-torn city.

Amid a festive atmosphere, an overcrowded ferry capsized in the Tigris River, close to its bank, killing more than 120 people, mostly women and children, while dozens are still missing after the victims were swept away by the strong river currents.

"We were longing for few moments of joy, but death insists on not leaving us alone," said Aya Nawfal, a Mosul University arts student and a survivor of the disaster. "I remembered Jonah's prayer while in the whale's belly. I was ready to face death when someone rescued me," she added. "My scream was like a world-shaking birth cry."

Fifteen of Nawfal's family members lost their lives in the catastrophe.

"I lost my beloved mother, sister and 4-month-old brother," Aya told al-Monitor, shedding tears. "My aunt also drowned, leaving her three daughters, the youngest of whom is 7 years old. It is an indescribable tragedy."

With the viral spread of the disaster's videos, Mosul residents' wrath grew and activists called for a protest the next day.

"Mosul's service and touristic facilities lack emergency sections and the most basic safety measures," said Ahmed Akram, a Mosuli activist who attended the protest. "There were no life jackets or lifesaver rings on that ferry or in the touristic area. The water levels in the river were very high and fast flowing, especially since the riverbed in that place is very steep."

While some accused the ferry operator of ignoring the authorities' warning of the rising water levels as the Mosul Dam gates had been opened, many others came out to protest against the corruption in the city.

"It was a turning point that awakened Ninevah's young people to cross the fear barriers," said Akram, "We expressed our discontent with the governor, called him a corrupt and asked him to leave without hesitation."

Officials showed their grief and visited the incident's site. In a statement, Iraqi Prime Minister Adel Abdul Mahdi said he was following the story "with pain and sadness" and had ordered "all state efforts" to find survivors and treat victims. Abdul Mahdi also suggested the removal of Ninevah Gov. Nawfal al-Akoub and his two deputies. "For the evident negligence in performing his duty and responsibility, and evidence of a possible waste of public funds and abuse of position, we propose the removal of the governor and his deputies," Mahdi wrote to Iraqi parliament Speaker Mohammed al-Halbusi.

The Iraqi parliament on March 24 voted to dismiss Akoub.

Akoub had gone to the scene of the disaster, accompanied by Iraqi President Barham Salih, in a convoy of vehicles, but was blocked by the angry victims' relatives. Akoub was reported to have run over two people with his car while he was trying to flee from stones thrown at him by protesters. Two people were injured.

"It was a peaceful protest. We called it to bring the touristic area's administrators to justice," said Mahmoud Juma, a university student from Mosul, "The governor arrived smiling and smoking a cigar. This provoked the people who approached his car. He drove it and started threatening us before he ran over two young men. He continued to run over them. It is equivalent to [an attempt of] intentional murder."

These violent scenes bring to mind the protests in Basra and raised concerns of a backlash that could destabilize Mosul, a city still in ruins after a nine-month battle to liberate it from the Islamic State.

"It was not possible to control people in such moments," Mahmoud Ezzo, a political scientist at Mosul University, told Al-Monitor. "I was worried about certain religious slogans in the protest glorifying martyrdom and the call to hold Friday prayers there. We were only there to demand that those responsible be held accountable."

Ezzo is concerned about a possible destabilization in Mosul, in part because monied interests, referred to as "the investor," that are backed by a strong militia are believed to be raking off profits from many businesses.

"Shuffling the deck might start soon," Ezzo said. But he feared that there could be a backlash if this happens. "The political and military supporters of the investor are strong and capable of sending a booby-trapped vehicle to target the protests. We have delivered our message and the next stage is left to the courts."

The protests could be exploited to restructure the political scene in Ninevah as many political blocs seek to find a foothold in a province of more than 4 million people that has the second-largest city after Baghdad, Ezzo said before the Iraqi parliament took action to remove the governor.

Salih Elias, a Mosul journalist and activist who attended the protest he described as the biggest in the city in five years, told Al-Monitor, "This is a positive action, although not enough. There are other perpetrators, including the authority supervising the touristic facility, rescue teams and the river police. There was no crisis management at all."

Omar Mohammed, a Paris-based scholar of Mosul and a blogger for Mosul Eye, agreed with Elias. "The removal of the governor and his deputies alone is not sufficient, for they have led a frightening corruption network in the province," said Mohammed. "We call for their trial, the withdrawal of all militias from Mosul and the formation of an international reconstruction committee that coordinates with experts from within the city. Without achieving this, the government would be doing nothing but a patchwork."

Ali Bashar, a political scientist at Bayan University in Erbil and the spokesman for an initiative named "We will not shut up," said corrupt militia-backed economic entities, the provincial council, thefts and fake reconstruction efforts are endangering the city's future.

"Corruption can threaten the city's security," he said.

Many protesters applauded the cooperation of security forces and their role to keep the protest on the peaceful track.

"Some violence and violations were dealt with rapidly by the organizers," said Khaldoun Salih, a university student specializing in economics who attended the protest. "The security forces kept calm and behaved responsibly, but I am afraid this will be exploited by political parties, destabilizing the city's security."

Suha Hassen, a Mosul native and doctoral student in counterterrorism at George Mason University in the United States, indicated that she thought there would not be a violent backlash in Mosul.

"Mosul residents are demonized, humiliated and accused of terrorism," she said. "They do not have the luxury of protesting, like the people of Basra or Baghdad. The latter will find popular sympathy … if they protest; Mosul residents will not."

Hassen said there is no leadership in the city capable of leading a revolution.

"It is a broken society surrounded by ethno-sectarian conflicts," she said. "The protests will fade away within a week. What we should worry about is the trauma and despair that will be passed on to Mosul's coming generations."