In a surprising shift, the people of Sunni-majority Mosul voted for the Shiite-led Nasr Coalition headed by Prime Minister Haider al-Abadi. 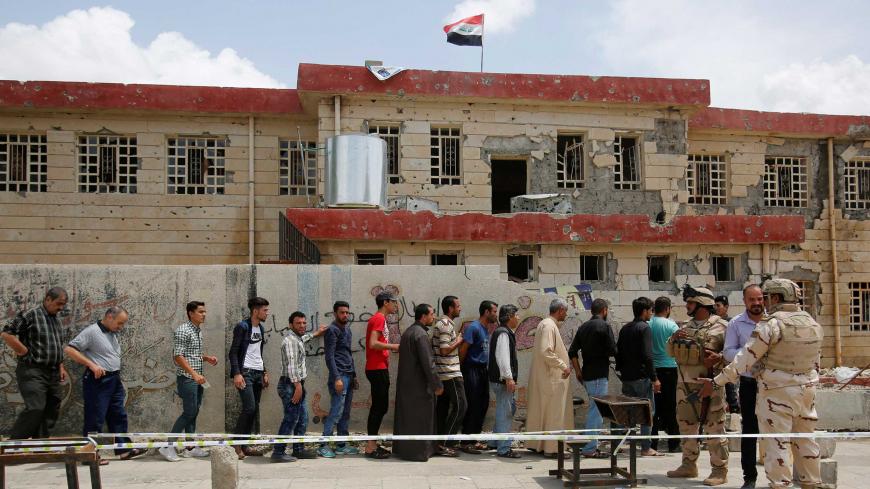 Iraqis stand in line to cast their votes at a polling station during the parliamentary election in Mosul, Iraq, May 12, 2018. - REUTERS/Khalid al-Mousily

MOSUL, Iraq — For the first time since the 2003 US invasion of Iraq, a Shiite coalition has won in Mosul. According to the final election results announced May. 19, The Nasr Coalition won seven seats, followed by six for the Kurdish Democratic Party and four for al-Wataniya. The majority of the local candidates on Prime Minister Haider al-Abadi's list are actually Sunnis, and its head is former Defense Minister Khaled al-Obeidi, an aeronautical engineer originally from Mosul.

“The Nasr Coalition got the [plurality] in Mosul because it was under Khaled al-Obeidi, who has the respect of the people in Mosul,” Faisal Jeber, a commander in Mosul’s Tribal Mobilization Forces, told Al-Monitor. “The former governor of Ninevah, Atheel al-Nujaifi, didn’t have a good relationship with the government in Baghdad. Mosul’s people are pragmatic, and they understood they need to cooperate with Baghdad. They expect the government to rebuild their city and to be treated as Iraqi citizens, not as Saddamists who deserve to be punished because they are Sunnis.”

Like other Iraqis, Mosulians were less than enthusiastic about the election. “I don’t feel any enthusiasm going to vote or any hope for change,” Badia Almahal, a teacher at a primary school in Mosul, told Al-Monitor on her way to her East Mosul polling station to vote for the Sunni al-Wataniya Alliance. She is a mother of two and her husband Mohammad H., who asked that Al-Monitor not relay his family name, is an engineer. Almahal spent most of her time at home when the Islamic State's (IS) self-styled caliphate imposed its rule on the second largest city in Iraq, and her husband opened a temporary electronics repair shop to bring in some income for the family. “The governments that have ruled Iraq in the last 15 years are responsible for IS’ takeover and the destruction of our beloved city,” Almahal said. “How could we trust them?”

Many Iraqi voters stayed at home, with a low national turnout of only 44.52% across Iraq. The national results show the Sairoon Alliance, an alliance between the Sadrist Movement and the Iraqi Communist Party, in first place, with the Nasr Coalition coming in second.

Before election day was over and in the days after, children walked the streets and men drove small vans around, busy collecting the metal frames of the countless electoral posters in the city, already putting the election behind them, ready to recycle the material. The results had been expected.

“It was clear that after Abadi's military campaign in Mosul, defeating IS, and after his announcement last July, Abadi a chance to be successful,” Laura Silvia Battaglia, a journalist following the electoral processes in Iraq since 2010, told Al-Monitor. In a Sunni-Arab area, where people also perceive hostility from the Kurds that increased during the war against IS, Mosulians didn’t have many options left. “It was not possible for them to support former Prime Minister Nouri al-Maliki's coalition or other Shiite parties, in particular not [al-Fateh], the [Popular Mobilization Units], which treated Mosulians during the Battle of Mosul with the same violence as IS.” Abadi is still considered the moderate candidate among the experienced politicians. On the other hand, “it should be taken in consideration that the last members of the Baath Party disappeared from the public political debate,” Battaglia added, “even if they are the closest to Mosulians in sectarian, tribal and cultural terms, in political Saddam-related past policies.”

But the biggest worry for many of Mosul’s citizens is the future of its reconstruction, which is still uncertain. Mohammad H., the engineer, believes that Iraq's corrupted central government is already impeding the reconstruction process. “Mosul is today a big source of new investments and enrichment for corrupt politics, so I don’t see the near future being positive for my city. I will not do my work if I cannot do it honestly.”

Layla Salih, a candidate for Al-Nahej Democratic Party, an independent party born a few months before the elections whose founder is Nawfal al-Akoub, the current governor of Ninevah province, has regularly visited the Old City since the end of the battle, keeping an eye on what was left miraculously intact. On election day, she moved between three polling stations in very poor neighborhoods, such as al-Ma’moon and al-Sumud in West Mosul.

“As a Baghdad University graduate in 1999 in archaeology and protection of antiquities, one of my priorities of the near future is to rebuild the western part and the Old City,” Salih told Al-Monitor. She hoped to take one of the eight parliamentary seats reserved for women from Ninevah province. “This year there were 215 women candidates in the province, which is a lot compared to the 19 of the last 2014’s elections,” she said. According to Iraqi law, 25% of parliament members must be women, but Salih will not be one of them at this time.

The next provincial elections will be in November, the date still unset. “The Nasr Coalition will not win again, especially if they don’t keep their promises to rebuild Mosul,” said Kareem Rasheed, a media producer based in Erbil who is originally from Mosul’s Karama neighborhood. Depending on the negotiations made to form the new government, Jeber has a prediction for the next provincial elections: “If the Nasr Coalition forms an alliance with Fateh to form the government, a lot of Sunnis will pull out and will not trust a Shia coalition anymore.”