Iraqi officials say they are ready to reconstruct the country and heal the populace devastated by the Islamic State. 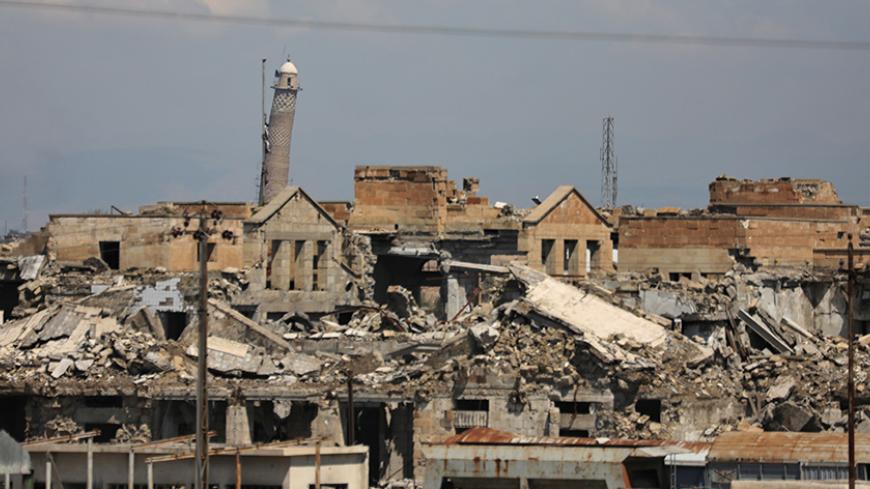 The Al-Hadba minaret at the Grand Mosque is seen among buildings destroyed during combat between Iraqi forces and the Islamic State in Mosul, Iraq, April 4, 2017. - REUTERS/Andres Martinez Casares

BAGHDAD — Iraqi military leaders expect victory this week against the Islamic State (IS) in the battle for Mosul, and the government has unveiled a $100 billion, 10-year reconstruction plan for the country that, despite some challenges, is slated to begin next year.

Mosul will be particularly important to rebuild because of the number of citizens who were forced from their homes, the extent of the damage there and the symbolic significance of the city, which IS considered its Iraqi capital. In addition to repairing the infrastructure, Iraqi officials acknowledge the importance of overcoming the influence IS established on the population, especially young people, during its three-year reign of terror there.

Hossam al-Ayyar, a member of the Ninevah Provincial Council, told Al-Monitor the plan will aim to eliminate “ideological extremism from the culture of the people of Mosul, who have been living for three years with IS' inflammatory rhetoric, and [prevent] the emergence of a new generation … inspired by the culture of hate.”

Ayyar added, “The plan includes cultural and religious programs adopted by mosques, schools and churches to consolidate the values of coexistence and moderation, promote shared living and the culture of peace and freedom of belief and the respect of the rights of others."

Ninevah council member Abdul Rahman al-Kaa told Al-Monitor, “This step is imperative to bring peace to the people of the city, which includes Sunni Arabs, representing the majority, and the Kurds, Shiite Arabs, who represent a small minority, as well as the Turkmens and the Christians. This could be done through the spread of a culture of tolerance and acceptance of others, distancing mosques from extremism, organizing periodic field visits [between] the people of Mosul [and] Baghdad and the areas in the center and the south, in order to achieve social integration. This is not to mention the need to involve all components in cultural, social and religious events.”

Saad al-Hadithi, a spokesman for the prime minister’s office, also told Al-Monitor it will be necessary to “instill the concept of coexistence and shared living between the different spectrums and ethnicities of the city.”

“Iraq will start implementing the strategic plan prepared by the Civil Crisis Management for the reconstruction of Mosul as a priority, as part of a long-term project for the reconstruction of all the areas liberated from IS. The first phase of the project will begin in 2018 and will continue until 2022. The final phase is scheduled to begin in 2023 and go until 2028.”

He said, “Mosul is a high priority in the reconstruction plan because of the massive number of displaced people there, in addition to the city’s symbolic importance, as IS considered it to be its second capital after Raqqa in Syria. Moreover, Mosul is the third-largest city in terms of population, after Baghdad and Basra in the south.”

In mid-June, Iraqi Minister of Displacement and Migration Jassem al-Jaf said, “The number of the displaced people from the western side of the city of Mosul has risen to 690,000 people since the Iraqi forces launched their offensive Feb. 19.”

Hadithi also talked about the main priorities of the strategic reconstruction project, saying, “It focuses primarily on the displaced, or those who stayed in the city when it was under occupation. The necessary funds, mechanisms and services will be employed to allow the return of the citizens who are able to do so to their homes, as the city is now secured by the army and the security forces present there.”

He added, “The second part of the project entails building security institutions in the province, for example, the local police, the intelligence and rapid deterrence forces, by encouraging the citizens to volunteer in security work. They will be involved in training courses and in special institutes to be able to defend the city, paving the way for the exit of the army and the combat forces."

Obviously, there will be some obstacles to the project, conceded Jamila al-Obeidi, a parliamentarian for Ninevah province.

“The biggest challenge facing the strategic plan is funding, especially since the salaries of the province's employees have yet to be disbursed,” Obeidi told Al-Monitor. “Foreign reconstruction companies will enter Iraq right after the exit of IS." She expressed hope that “this investment will contribute to the benefit of the citizens and not be only profitable to some parties.” She warned against “corruption in such projects.”

The solution to the funding problem appears to be through borrowing. The World Bank will be the main option. Iraqi Prime Minister Haider al-Abadi met May 24 with World Bank Regional Director Saroj Kumar Jha to discuss reconstruction operations in the liberated areas.

Hadithi told Al-Monitor that “the bank has shown willingness to invest in the reconstruction of Mosul.” For example, the Reconstruction Fund for Areas Affected by Terrorist Operations was early to launch its projects. During the Erbil International Reconstruction Conference, the fund revealed May 18 that more than 151 projects had been launched in several provinces liberated from IS.

Undoubtedly, the reconstruction projects will be a good investment opportunity for many countries, which have become even more enthusiastic to participate in projects now that they have learned that Iraq will be able to provide the necessary funds for reconstruction.

This is the case with Turkey, Iraq’s neighbor. Turkish ambassador to Iraq Fatih Yildiz said June 15 that Turkey is “ready to hold a conference for Iraqi and Turkish businessmen and investors during the months of August and September to cooperate in the reconstruction process.” French companies have also expressed interest in reconstruction projects.

The people of Mosul began to return to their city before the final liberation of the area, Ninevah Gov. Nawfal Hamadi al-Sultan said in a press statement June 15. However, the complete return of the displaced will require the reconstruction process to move quickly to eliminate terrorism, Islamic Supreme Council President Ammar al-Hakim said May 22.