Why this Iraqi city is starving

Residents of Fallujah, Mosul and other Iraqi cities under the Islamic State’s control are suffering under an IS strategy calculated to turn them against their government. 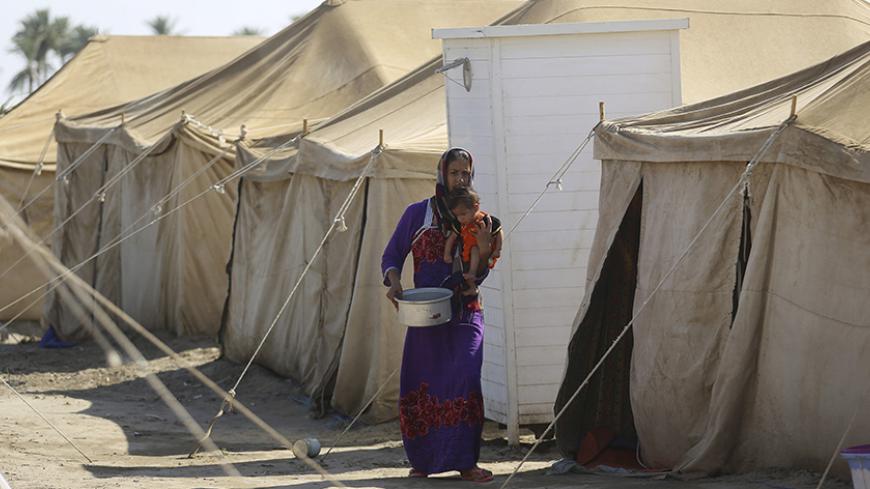 An Iraqi displaced woman, who fled from Islamic State violence in Anbar, carries her child at a refugee camp near Fallujah, July 25, 2015. - REUTERS/Ahmad Mousa

BAGHDAD — The city of Fallujah in Anbar province has been under the Islamic State’s (IS) control for nearly two years. When asked about the living conditions there, Mahmoud Falluji (a pseudonym) said, “I reached a point where I was ready to slaughter a cat so my family and I could eat it.”

Al-Monitor met with Falluji, a former construction worker, in Baghdad after he paid IS militants $1,500 to let him, his wife and two children leave Fallujah. IS usually forces each person to pay $1,000 to leave, but Falluji was able to make a deal.

Falluji collected this sum from his relatives and friends after he realized that staying in the city would be devastating. He said he was lucky to leave, because IS soon after imposed a blockade on the city and prevented anyone else from leaving. He added, “Life in Fallujah has become dreadful. Children are wasting away from the lack of food.” Falluji still has family in Fallujah, and he calls to check up on them.

Falluji came across pictures from the Syrian city of Madaya under siege by the Syrian regime. He said, “The situation in Fallujah is very similar to that of Madaya. But none of the political parties are talking about the pain of the besieged residents.”

Despair is plaguing Fallujah, where Iraqi security forces have failed to resume control, although Iraq's Interior and Defense ministries have announced the start of military operations to liberate the city from IS.

Parliament member Liqaa al-Wardi, the head of the parliamentary committee on the displaced, told Al-Monitor, “Fallujah’s suffering is by far greater than that of the Syrian town of Madaya. People in Fallujah ate animal feed after grinding it.” She went on, “Yet the animal feed did not do them good and caused diseases, killing dozens of people.”

Wardi, a native of Anbar province, is active in reporting on the suffering of civilians in Anbar’s besieged cities. She has a diverse network of sources in those cities reporting on the conditions there. She said, “No one cares or is aware of Fallujah, which has been suffering for months. The suffering has increased now and will continue to increase in the coming period.”

Wardi added, “The Iraqi government and international community need to act seriously and genuinely to save the residents, because we do not want to lose more people.”

There are no official statistics on those who have died in the course of the humanitarian crisis in Fallujah, only one of many Iraqi cities suffering under IS. The residents of Mosul, which has been under IS control since June 2014, are in a similar crisis.

A representative of the Iraqi Observatory for Human Rights in Mosul who requested anonymity for security reasons told Al-Monitor, “IS has adopted a policy leading to starvation among civilians in order to oblige them to abide by its orders and join its ranks to provide food for their families.”

The representative said over the phone from Mosul, “In the city, the humanitarian situation is bad to the point that it cannot be described with words. The residents’ economic situation is also bad, and civilians are able to neither escape nor end their starvation, especially as there is a lack of milk for children and a lack of medication for the elderly.”

The representative could offer no statistics on the number of people starving or the number of besieged cities, because he is unable to gather them for fear of being recognized and killed by IS.

Jamila Obeidi, a parliamentarian for Ninevah province, confirmed to Al-Monitor, “The humanitarian situation in Ninevah, specifically in the city of Mosul, is horrible.”

She explained, “There are critical medical conditions for which treatment is unavailable. There are children and elderly people who are sick and do not have access to medication and food. … Unfortunately, the Iraqi government has cut off the income of its employees in Mosul.” She described the government’s policy as “inappropriate behavior,” saying, “Citizens need money, and their presence under IS control does not mean that they agree on it. They are helpless civilian residents.”

The Iraqi government decided in July 2015 not to pay its workers and retirees in IS-controlled provinces, including the city of Mosul, as IS is using the money to purchase arms and carry out operations against security forces and cities under the Iraqi government’s control.

Al-Monitor tried to obtain information on the food and medication needs in IS-controlled cities, but the Iraqi lawmakers and residents fleeing the cities could offer little data. Media reports, however, agree that what residents need most is milk for children, medication for chronic diseases and basic food such as flour and vegetables.

Iraqi parliamentarians told Al-Monitor that the residents in IS-controlled areas are most in need of money, as many of the people in those cities are government employees and retirees.

So far, Iraqi security forces have not set a real timetable to liberate these cities from IS. The longer these operations are delayed, the worse the humanitarian crisis grows.