The starving citizens of Deir ez-Zor in eastern Syria are trapped in the battle between the Islamic State and government forces, squeezed by blockades imposed by both sides. 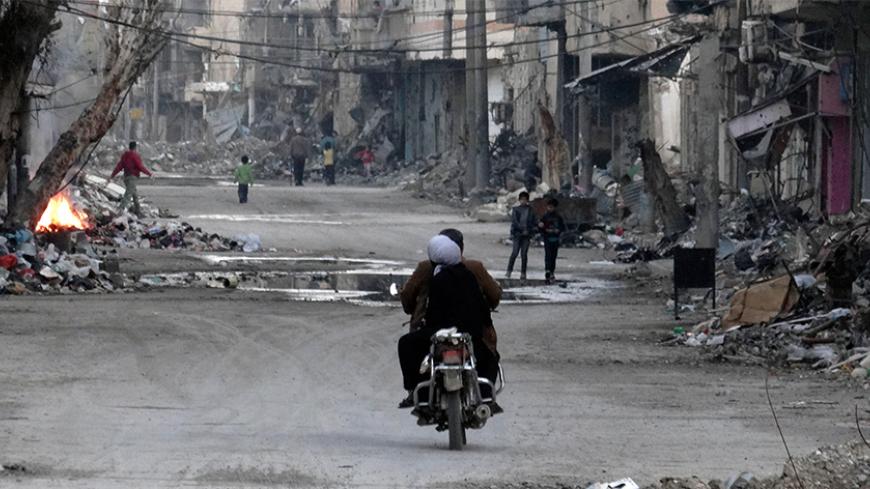 A man and a woman ride a motorcycle along a street filled with debris of damaged buildings in Deir ez-Zor, March 5, 2014. - REUTERS/Stringer

QAMISHLI, Syria — Deir ez-Zor is a city divided and beset on all sides. Though much of the city is still controlled by the Syrian government, it has been under attack and blockaded for more than a year by the Islamic State (IS). Shelling and starvation have killed dozens of civilians, and much of the city has no electricity.

The siege "is threatening the lives of the biggest unarmed mass of humanity in Syria,” according to a report titled “420 Days of Siege Laid on Deir ez-Zor,” issued by the Justice for Life Observatory (JFL). The civil rights organization is comprised of activists and journalists in the city.

Civilians are trapped. JFL director Jalal al-Hamad said IS began besieging neighborhoods controlled by President Bashar al-Assad's forces in January 2015, closing all land and water crossings leading to it and preventing food and medical supplies from reaching the civilians there.

Both IS and the regime are preventing civilians from entering or exiting the areas under their control. While IS interrogates, harasses and confiscates the documents of whoever wants to leave the city, the Syrian government asks those who want to leave, be it by land or by air, for security approvals from intelligence authorities.

Speaking to Al-Monitor, Hamad revealed that “between February 2015 and March 2016, the death toll reached 63, including 14 women and 25 children, due to IS shelling of regime-controlled neighborhoods.” What's more, JFL correspondents reported 32 civilians in the besieged neighborhoods died due to malnutrition and the spread of diseases.

“In the besieged neighborhoods, only Assad's government hospital is operating, but it lacks medical professionals. There is the military hospital, but it is reserved for the military,” Hamad said.

In the absence of food and income, many civilians in Deir ez-Zor have cut back to only one meal a day, and that meal contains only half the usual amount of food. The deteriorating living situation has prompted residents to use grass and wild plants in their food, according to the World Food Program organization. The situation has become dire, much like Madaya earlier this year.

“I stand in queues for hours to get bread. Most of the population is relying on bread, grass and water to survive,” Mariam, who did not reveal her last name, told Al-Monitor via WhatsApp.

On April 10, the United Nations airdropped its second batch of relief supplies to help the city's estimated 200,000 civilians besieged by IS militants. According to the UN, the besieged “are in dire need of humanitarian assistance as cases of malnutrition and starvation deaths have been reported."

Adding to residents' difficulties, the prices of what basic foodstuffs and fuel are available have tripled since IS took control of the area, according to another JFL report, issued April 24.

A woman from the IS-controlled Hamidiya neighborhood told Al-Monitor on condition of anonymity, “The living conditions in the IS-controlled regions are worsening as the fluctuating dollar exchange rate inflates the prices of food and vegetables.” She added, “Formula milk is completely missing, and pharmacy shelves are almost empty."

Syrian dissident Riad Dirar also painted a grim picture of life in his city: “This town is forgotten, despite the atrocities committed by both IS and the Syrian regime.”

Dirar told Al-Monitor that residents are suffering from both the IS blockade on the one hand and regime shelling on the other. He pointed out that the battle for Deir ez-Zor will probably drag on, as the province is not a priority right now. "All of the international efforts are focusing on confronting IS in Raqqa, which will further extend the blockade of Deir ez-Zor.”

Dirar called for international humanitarian aid “to secure the necessary civilian supplies and basic needs and ease the dual blockade.”

While government forces control part of the city’s west, its civil airport, central prison, official buildings, the Brigade 137 headquarters and the vanguard camp, IS controls the remaining parts of the city and its entire countryside. Deir ez-Zor is the capital of the eastern province of the same name, adjacent to the border with Iraq. The government controls only about 20% of the province, mostly in the west.

The province covers about 33,000 square kilometers (12,741 square miles), roughly the size of Maryland, and accounts for about 18% of ​​the country's land area.

Out of about 15 besieged regions in Syria, the city of Deir ez-Zor is the most heavily populated. According to the UN, in the city and surrounding provincial areas, 400,000 people are suffering from the siege, while all the warring military forces are using civilians as weapons in their open battle.