The Ninevah provincial council has voted to replace a governor who was close to Iran-backed forces with a military man who is close to the United States. 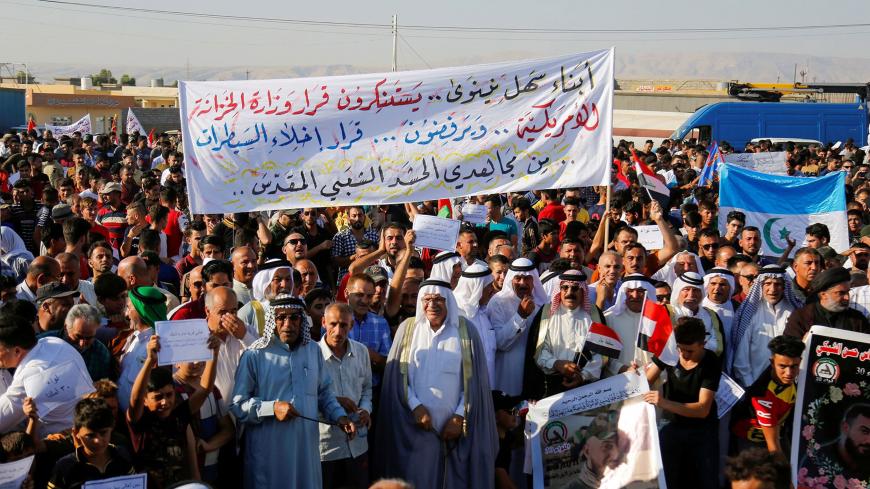 People gather during a protest against an order for the Popular Mobilzation Units to leave checkpoints, Mosul, Iraq, July 26, 2019. - REUTERS/Abdullah Rashid

BAGHDAD — As Iraq's protest movement struck against Iran-backed Shiite groupings in the south and center of the country, the north is also turning its back on them. While a man allied with Shiite forces won the Ninevah governor's post in May, he was ousted in November and replaced with a Sunni figure close to the United States.

Political conflict has returned to the forefront of developments in Ninevah province after the provincial council voted Nov. 24 to dismiss Gov. Mansour al-Muraid and appointed instead the man who had commanded the military operation against the Islamic State there, Maj. Gen. Najm al-Jabouri. The roots of the current crisis in the province stem from the political alignments that followed Muraid’s election in May. Muraid, who is Sunni, is affiliated with the so-called Ataa faction chaired by the head of Iraq’s Popular Mobilization Units, Faleh al-Fayadh; the governor's appointment had drawn battle lines within the Iraqi parliament.

The Ataa faction, which withdrew from the Reform and Reconstruction Coalition to join the Construction Coalition, won the Ninevah governor's post with the support of the Sunnah of Construction faction, headed by the leader of the Arab Project, Khamis al-Khanjar, and former Salahuddin Gov. Ahmad Jabouri, also known as Abu Mazen. Parliament Speaker Mohammed al-Halbusi, meanwhile, had backed the election of Hossam al-Abbar to the position following the dismissal of Gov. Nawfal al-Akoub, which occurred after a deadly ferry sinking in Ninevah's capital, Mosul.

In recent months, Halbusi has forged a strong coalition within the Ninevah provincial council under the name of Iraqi Ninevah, comprised of 23 of its 39 members. He was thereby able to get Muraid dismissed after opposition parties claimed the governor's election process was legally flawed and described it as giving rise to "foreign hands" who controlled Ninevah from abroad.

Osama Nujaufu, the head of the Salvation and Development Front, announced a "judicial, parliamentary and popular struggle against what occurred" and said, “We will not allow a foreign hand to craft Ninevah’s future.”

These developments, including the process of selecting Najm al-Jabouri as governor over Muraid, come following the Iraqi parliament’s decision Oct. 28 to end the work of the provincial councils — an attempt to achieve "political reforms" in response to demands launched by protesters at the outset of October. This in turn prompted parties backing Muraid to challenge Jabouri’s election process.

A member of the Ninevah provincial council, Hussam al-Abbar, said, “The appeal submitted to the administrative court means that the provincial council’s selection processes remain legal until the court's decision is issued, as stipulated by law. This indicates that the council’s decisions are binding and cannot be appealed — among them, the election of the new governor, Najm al-Jabouri.”

Abbar told Al-Monitor, “We believe that Jabouri is a popular figure in Mosul and that he will be able to use this popularity to achieve appropriate reforms and implement the reconstruction and development plan.”

Jabouri, 63, formerly served in the Baathist Iraqi army. He was mayor of Tal Afar in western Ninevah from 2005 to 2008, when he became a researcher at the National Defense University in Washington. Known as a close US ally, he returned to Iraq in 2015 to fight the Islamic State.

Abbar said the council's “vote in selecting Jabouri was democratic and far from political deal-making.”

Member of parliament Mohammed Karbouli, the leader of the Union of Iraqi Forces, said in a Twitter post, “Muraid’s dismissal is an indication of the demise of foreign influence and its weakness in protecting its clients in Iraq.” He said Muraid had been “installed despite the will of the province’s people.”

He said the final decision on the governor's post will be up to the administrative court.

Muraid denied reports that he had submitted a request to resign and said he would not leave his post on the grounds that his removal was illegal. However, Iraqi President Barham Salih on Nov. 28 approved the decision to appoint Jabouri as Ninevah’s governor, pending the administrative court’s ruling on the appeal.

Ninevah provincial council member Barakat Shamo said Muraid had indeed signed a "genuine and not fraudulent" resignation letter that was received by the council. “The council’s presidency therefore opened the door to the nomination for post of governor.”

Shamo suggested that developments in Baghdad and the southern provinces would likely have ramifications in Ninevah. “Political changes in the capital affect stability in Ninevah, especially the security situation and shifts in political alliances in the context of resignations or changes in the federal government.”

Prime Minister Adel Abdul Mahdi announced Nov. 29 that he would submit his own resignation to parliament, hours after a sermon by the Shiite authority in Najaf requesting the parliament to withdraw its confidence in the government.

As ever, provincial leaders are experiencing the fallout of alliances formed in Baghdad. In the event that Sunni factional allegiances shift once again as part of an attempt to be part of the formation of the largest parliamentary bloc, or if existing alliances collapse, the political map likely would be redrawn in Ninevah and other provinces. Until then, it will be the opinion of the federal court that will determine the legitimacy of the election of the new governor.