The secessionist wing in Iraqi Kurdistan is working on using demands from some Sunni Arabs to join the region to support the upcoming referendum and independence. 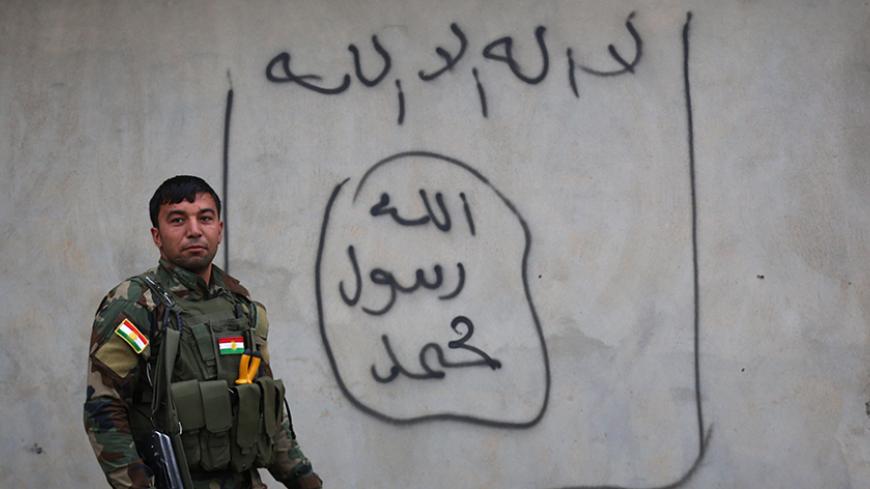 A peshmerga fighter stands next to graffiti of the Islamic State flag on a wall in Zummar, in the northern Iraqi governorate of Ninevah, Dec. 18, 2014. - SAFIN HAMED/AFP/Getty Images

As the Islamic State's reign comes to an end in Iraq, the sectarian narrative of Shiites, Sunnis and Kurds — and the competition among them — is re-emerging. Political parties are mobilizing the three components to advocate a sectarian identity for each of them in post-IS Iraq.

In a series of posts on his official Facebook page, Iraqi Prime Minister Haider al-Abadi warned against "attempts by some to market sectarianism" after the liberation of Mosul from IS. "After liberating Mosul, new faces left their hideouts and appeared to speak in the name of the people of Mosul and Anbar," Abadi said in a post.

Abadi's remarks refer to certain demands that have been posed in the name of Sunnis in the liberated territories to divide the country along sectarian lines. The demands include calls for including Sunni territories in Iraqi Kurdistan on the premise that Sunni Arabs and Kurds both share the Sunni doctrine. This could mean dividing Iraq into Shiite and Sunni camps.

Arab villages in the north of Ninevah province witnessed demonstrations demanding the integration of their territories into Iraqi Kurdistan. Hundreds affiliated with Ninevah's Arab tribes from Zummar and Rabiah west of the Tigris River took to the streets July 18 to demand integrating their territories into Iraqi Kurdistan. Zummar and Rabiah, which are among the territories that the Kurdistan Regional Government (KRG) aspires to integrate, are referred to in speeches by the regional government's officials as "Kurdish areas outside the administration of the Kurdistan Region."

In Kirkuk, where the regional government also intends to hold the referendum despite the fact that it is not within the region's actual borders, Arab tribes, including the Abada tribe, supported holding a referendum over the independence of the region. Tribe leader Sheikh Khalaf al-Abadi told Kurdistan 24 on July 6, "We support the Iraqi Kurdistan referendum because the peshmerga forces protect all the components without discrimination based on religion or ethnicity and we stand with the side that protects us."

Prominent Iraqi Sunni cleric Ahmad al-Qabisi predicted in an interview with Samarra Channel on July 20 that Iraq would be divided, that the Sunni territory in Iraq would be in Kurdistan and that Iraqi Kurdistan will not only be for Kurds, as Sunni Arabs will join it since they sincerely want to be under its umbrella.

The sectarian competition in Iraq shows that there are two clear mainstream discourses. Shiite parties want to have the upper hand in the state through their political representation and by keeping their military factions within the Popular Mobilization Units, which was destined by the Popular Mobilization Law to work outside — but parallel to — the structure of the Iraqi army. There is also the secessionist discourse by Kurdish parties, especially the Kurdistan Democratic Party (KDP), which represents a majority in both the KRG parliament and the government.

Sunni Arab parties in Iraq are still unable to formalize the demands of their voters because they are not designed to support a united Iraq within a comprehensive national rhetoric that brings together other groups. Meanwhile, they are also unable to establish their own platform of administering Sunni-majority territories in post-IS Iraq, which sometimes makes them vulnerable to exploitation by Shiite and Kurdish parties according to their own political agendas.

In the past, Shiite and Sunni parties negotiated several compromises to support a platform by a Shiite party in exchange for the Sunni side receiving certain political seats. Now, there are obvious Kurdish attempts to exploit Sunni Arabs for the interest of the KDP's secessionist platform.

One example was when KRG President Massoud Barzani met with a group of Arab tribal leaders from the disputed territories in Ninevah July 22. In a statement, the spokesman for Ninevah's Arab tribes Muzahim al-Howeit said, "Sheikhs of tribes have expressed their desire to integrate their territories into Iraqi Kurdistan and also to include it in the fate-deciding referendum scheduled to take place Sept. 25."

Howeit called for "nominating Arab nationalists to become members of the Kurdistan parliament" in the future.

At the same time, Barzani is mobilizing Sunni Arab countries to receive their support for Kurdistan's independence. On July 4, Barzani met with consuls from seven Sunni Arab entities — Saudi Arabia, Jordan, Egypt, United Arab Emirates, Palestine, Kuwait and Sudan. Barzani gave the Sunni Arab diplomats his views about a post-IS Iraq and the reasons for holding a secession referendum in September.

Therefore, it appears that the Sunni Arab community is going to be used as leverage against Baghdad in the hands of the secessionist wing in Iraqi Kurdistan, while the Shiite political authority in Baghdad will continue to fail to embrace the Sunni community or help it formalize a nationalist platform that may help promote a national identity for a united Iraq. What's going to be lost in the middle is the interests of the Sunni community, which has long been suffering destruction at the hands of terrorist groups, and, on the other hand, has been neglected by the central Shiite-led government in Baghdad.