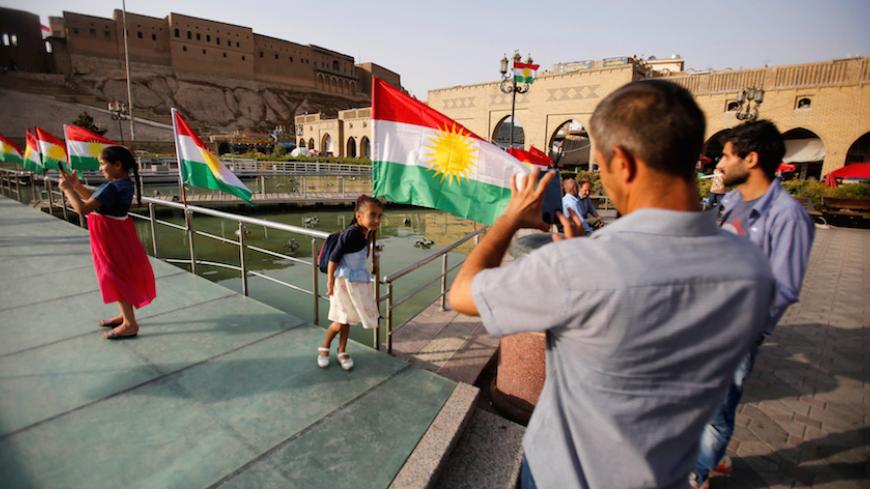 A man takes a picture of his daughter near the Kurdistan flag at the castle of Erbil, Iraq, July 29, 2017. - REUTERS/Khalid Al-Mousily

While Iraqi Kurds are expected to overwhelmingly vote their preference for an independent state on Sept. 25, it is less clear how Iraqi Kurdistan President Massoud Barzani will manage opposition from just about everyone else.

The referendum does not compel Barzani to declare an independent Iraqi Kurdish state. Barzani may consider a yes vote as leverage to negotiate with Baghdad and neighboring powers from a greater position of strength.

Barzani has been a master of managing the aspirations of his people for an independent state with the niceties of regional realpolitik. This will be even more of a political tightrope after the referendum.

This column wrote last month that there is “shared interest among Syria, Turkey and Iran in preventing Kurdish autonomy” in both Syria and Iraq. The Iraqi Kurdish referendum complicates Erbil’s close ties with Ankara. Turkish President Recep Tayyip Erdogan has opposed the referendum from the start, fearing the impact on the Kurds in both Turkey and Syria. Turkey’s top priority in Syria is to break the Kurdish People’s Protection Units (YPG). The YPG is Washington’s Syrian partner of choice and also aligned with the Kurdistan Workers Party (PKK). The United States and Turkey consider the PKK a terrorist organization. While the KRG does not support the YPG, and is a rival of the PKK, both the YPG and the PKK are popular with many Iraqi Kurds.

Cengiz Candar reports that among “the inner circle of the KRG decision-making process, negative comments by the Turkish side are for the benefit of Turkey's domestic political scene. What they have heard from their Turkish colleagues privately on the referendum issue is quite different. … Therefore, for the Kurds, there is supposedly no need to be concerned about Turkey's reactions.”

The question is whether the KRG inner circle indeed has the inside track or instead is hearing what it wants to hear. Candar writes, “Erdogan’s statement and the words he chose have to be treated with the utmost importance, as his position overrides every institution and personality in today’s Turkey. His remarks during a July 5 interview with TV channel France 24 do not support KRG officials’ optimism on Turkey’s ultimate position.

"The Turkish president unequivocally said that he does not see the referendum as the right step, and that he was directing his message to ‘the local administration in northern Iraq.’ He said the administration would regret such action.

"'Barzani and the northern Iraqi local administration are not ready for such an initiative,’ he added. His most dramatic words in the interview were these: ‘If you take such a step, that means you have started dismembering [Iraq], and other similar moves will follow. Therefore, we do not see it as the right step.’”

Candar continues, “Anybody familiar with Erdogan’s speaking style should know that these phrases are quite tough — beyond a friendly warning. Tellingly, Erdogan was also belittling the KRG by saying 'local administration' rather than using Iraqi Kurdistan's official name. Erdogan has consistently made it known that he doesn't support even the autonomous Kurdish entity in northern Iraq, fearing the same thing will happen in Syria. … Turkey’s military establishment, one of Erdogan’s recent staunch domestic allies, is also known for its opposition to the autonomous Kurdish entity.”

Nahwi Saeed writes that Iran unambiguously opposes to the referendum. “In a move that coincided with preparing for the referendum,” Saeed writes, “Iran cut water flow from the Little Zab River to Kurdistan. Iranian officials have recently told a high-ranking Patriotic Union of Kurdistan (PUK) delegation, ‘If you hold a referendum, do not expect anything good from us.’ More recently, the Iranian defense minister has threatened that the separatist movements in Iraq will not be tolerated. In short, Iran is unequivocally against the Kurdish referendum and will try to prevent it from taking place.

Holding the referendum is also complicated, Saeed says, because it would take place not only in the Kurdistan Region that Barzani is president of, but also in "disputed territories such as the oil-rich city of Kirkuk, Sinjar, Makhmour and Khanaqin."

Saeed adds, “The Kurdish internal discord cannot be overlooked either. The rivalry between the PUK that has dominated Kirkuk — the epicenter of the disputed territories — politically and the KDP that has controlled a lot of Kirkuk's oil infrastructure can affect the timing and the possibility of holding a referendum in general and in those areas in particular.”

Saeed continues, “Despite the above internal and external challenges, there are also technical obstacles over the vote. For example, the head of the Kirkuk [electoral] commission has already said that ‘no preparations have been made for the referendum as there were no instructions from Baghdad to do so.’ In other words, instead of the Independent High Electoral Commission (IHEC), IHERC [the Independent High Electoral and Referendum Commission] in Kurdistan will oversee and conduct the referendum, including voter registration. Unlike the Kurdistan Region, where data from previous elections is available, there is no reliable data on the disputed areas that IHERC can readily rely on for the voter registration. Therefore, given the time constraint and the difficulty of determining voter eligibility, it is unlikely that IHERC will be able to hold a referendum Sept. 25 in the disputed territories.”

Barzani may seek to balance opposition from Baghdad and Iran by playing the sectarian card. Ali Mamouri writes that the Kurdistan Region president “is mobilizing Sunni Arab countries to receive their support for Kurdistan's independence. On July 4, Barzani met with consuls from seven Sunni Arab entities — Saudi Arabia, Jordan, Egypt, United Arab Emirates, Palestine, Kuwait and Sudan. Barzani gave the Sunni Arab diplomats his views about a post-IS Iraq and the reasons for holding a secession referendum in September.”

"In Kirkuk, where the regional government also intends to hold the referendum despite the fact that Kirkuk is not within the region's actual borders, Arab tribes, including the Abada tribe, supported holding a referendum over the independence of the region. Tribe leader Sheikh Khalaf al-Abadi told Kurdistan 24 on July 6, ‘We support the Iraqi Kurdistan referendum because the peshmerga forces protect all the components without discrimination based on religion or ethnicity and we stand with the side that protects us.’"

Mamouri continued, "Prominent Iraqi Sunni cleric Ahmad al-Qabisi predicted in an interview with Samarra Channel on July 20 that Iraq would be divided, that the Sunni territory in Iraq would be in Kurdistan and that Iraqi Kurdistan will not only be for Kurds, as Sunni Arabs will join it since they sincerely want to be under its umbrella.”

Mamouri concludes that “it appears that the Sunni Arab community is going to be used as leverage against Baghdad in the hands of the secessionist wing in Iraqi Kurdistan, while the Shiite political authority in Baghdad will continue to fail to embrace the Sunni community or help it formalize a nationalist platform that may help promote a national identity for a united Iraq. What's going to be lost in the middle is the interests of the Sunni community, which has long been suffering destruction at the hands of terrorist groups, and, on the other hand, has been neglected by the central Shiite-led government in Baghdad.”