KRG not concerned by Turkey's reactions to independence vote 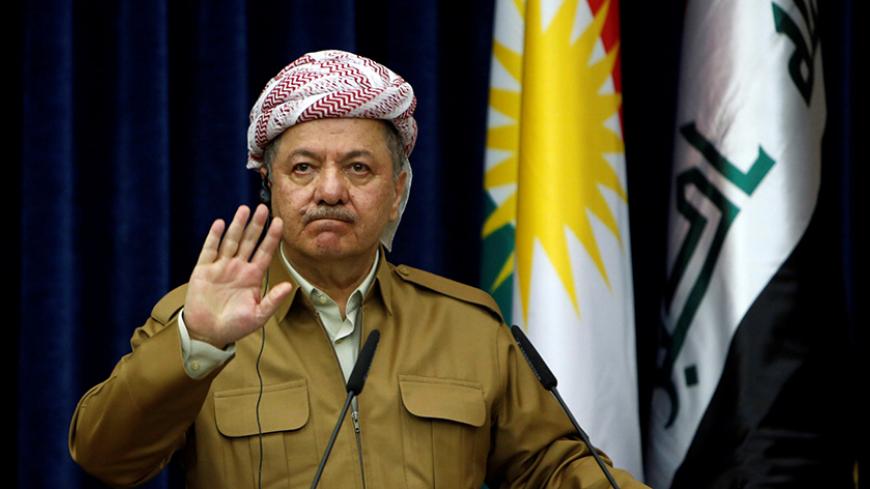 There's a potential conflict looming for Turkey that hasn't been getting the attention it deserves, especially as it would involve one of Ankara's very few remaining regional partners: the Kurdistan Regional Government (KRG) of Iraq.

When Barzani announced his decision to ultimately pave the way for the independence of Iraqi Kurdistan on Turkey’s southeastern border, the Turkish Foreign Ministry reacted June 9.

“We have been conveying for some time Turkey’s concerns about the independence referendum … to the government of Iraq and the KRG, as well as to the leading members of the international community. In this regard, we have been stressing that, at a time when critical developments are unfolding in the region, such a move would benefit neither the KRG nor Iraq and that it would have negative consequences which will cause further instability,” the ministry's statement said.

“We see the KRG’s decision to hold the independence referendum on Sept. 25, which runs counter to our advice and warnings, within the above-stated context and consider that it will be a grave mistake. Preserving Iraq’s territorial integrity and political unity is one of the fundamental principles of Turkey’s Iraq policy. … Furthermore, given the present extraordinary circumstances that the people of Iraq are in [in part because of the devastation of the war against the Islamic State], it is obvious that a referendum which will also include the disputed territories will be far from reflecting the will of the people,” it added.

Turkey does not want oil-rich Kirkuk province to be included in the Sept. 25 vote.

Right after the foreign ministry released its statement, Turkish Prime Minister Binali Yildirim spoke on the issue and went a bit further, labeling the planned referendum an “irresponsible act.”

Kurdish authorities found Turkey's stand lukewarm. KRG Prime Minister Nechirvan Barzani, who champions extremely close relations with Turkey and President Recep Tayyip Erdogan’s household, was quoted by Kurdish media as saying, “I believe from what we have seen so far, the reactions of [various] countries are very normal.” He continued, “There is nothing in [the Turkish statements] that could cause concerns.”

According to my Kurdish sources in the inner circle of the KRG decision-making process, negative comments by the Turkish side are for the benefit of Turkey's domestic political scene. What they have heard from their Turkish colleagues privately on the referendum issue is quite different.

Therefore, for the Kurds, there is supposedly no need to be concerned about Turkey's reactions.

However, Erdogan’s statement and the words he chose have to be treated with the utmost importance, as his position overrides every institution and personality in today’s Turkey. His remarks during a July 5 interview with TV channel France 24 do not support KRG officials’ optimism on Turkey’s ultimate position.

The Turkish president unequivocally said that he does not see the referendum as the right step, and that he was directing his message to “the local administration in northern Iraq.” He said the administration would regret such action.

“Barzani and the northern Iraqi local administration are not ready for such an initiative,” he added. His most dramatic words in the interview were these: “If you take such a step, that means you have started dismembering [Iraq], and other similar moves will follow. Therefore, we do not see it as the right step."

Anybody familiar with Erdogan’s speaking style should know that these phrases are quite tough — beyond a friendly warning. Tellingly, Erdogan was also belittling the KRG by saying “local administration” rather than using Iraqi Kurdistan's official name.

Erdogan has consistently made it known that he doesn't support even the autonomous Kurdish entity in northern Iraq, fearing the same thing will happen in Syria.

Turkey’s military establishment, one of Erdogan’s recent staunch domestic allies, is also known for its opposition to the autonomous Kurdish entity. Anti-Kurdish military hard-liners believe that “northern Iraq” sounds like a distinct region and that using the phrase could legitimize establishment of a sovereign authority other than Baghdad. About a decade ago, the hard-liners stopped using the phrase "northern Iraq," instead referring to the area as the “north of Iraq” to emphasize that the country is one territorially indivisible unit.

Now they are doing so again. The phrase "north of Iraq" resurfaced July 17 in the communique of Turkey’s National Security Council, an advisory body chaired by the president that brings together top military brass and the government.

“It is stated that the decision made by the regional administration of the north of Iraq cannot be implemented neither de jure nor de facto; that such an initiative is a grave mistake which would bear undesirable consequences,” the official communique said.

The last salvo against the referendum came from the Iraqi Turkmen Front, which is well known for its affiliation with Turkey, particularly with Turkish military intelligence. Speaking to Turkey’s state-owned Anadolu Agency, Iraqi Turkmen Front leader Ershad Salihi said the upcoming referendum would lead to chaos.

"Kurds will be those who will suffer the most after the referendum, which would only trigger the division of the country that has been struggling with various types of chaos, terrorism, conflict and problems for 10 years now," Salihi said, adding that Kurds, who have gained a certain amount of autonomy since the overthrow of Saddam Hussein [in 2003], will suffer losses in political, economic and national areas.

There is no doubt that Salihi's statement reflected the outlook of Turkey’s decision-makers on Iraqi and Kurdish issues.

Despite the strong relationship gradually established, particularly since 2009, between Ankara and Erbil (the city Iraqi Kurds consider their capital), few people expect Turkish authorities to endorse or acquiesce to the Sept. 25 referendum on Kurdistan’s independence. It will be interesting to see what happens next.