Turkey’s National Security Council convened Sept. 22 to decide what measures to take against the Kurdistan Regional Government if it holds its independence referendum. 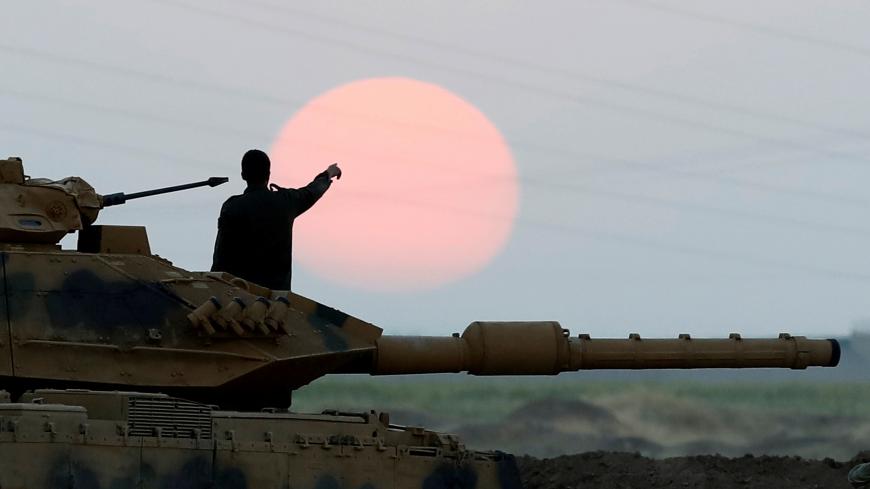 A Turkish soldier points as he stands on a tank during a military exercise near the Turkish-Iraqi border in Silopi, Turkey, Sept. 22, 2017. - REUTERS/Umit Bektas

Three days prior to the Kurdish independence referendum, Kurdistan Regional Government President Massoud Barzani — who remains committed to holding that fateful referendum — spoke with The Guardian, expressing his despair at the lack on international support for Kurdistan's aspirations. “Is it a crime to ask our people to express themselves over what they want for the future?” he asked.

For him, the simple question to be found on the referendum — “Do you want the Kurdistan Region and the Kurdistani areas outside the region’s administration to become an independent state?” — should not have triggered such hostile reactions on the international stage.

He further told The Guardian: “It was surprising to see the reaction from the international community. Where is your democracy now? Where are the UN charters? Where is the respect for freedom of expression? After the big sacrifice of the peshmerga and breaking the myth of [the Islamic State], we thought they would respect this right.”

Dramatic developments in the past few days have proven Barzani wrong. Had Barzani predicted the international uproar over the referendum, would he still be as committed to the referendum? It is difficult to answer. But The Guardian observed that Barzani “appeared rattled by the intensity and volume of the opposition to the ballot," further mentioning that Barzani had thought the United States would support the referendum.

A White House statement following the Sept. 22 meeting between President Donald Trump and Turkish President Recep Tayyip Erdogan would be another source of consternation for Barzani. The statement confirmed that the two leaders "reaffirmed their rejection" of the referendum and vowed "serious consequences" if it took place.

Turkey’s National Security Council (NSC), chaired by Erdogan, convened Sept. 22 to decide what measures to take against the referendum. The NSC brings together the country’s political and military leaderships, including ministers of foreign affairs and defense, as well as the director of intelligence. Until the early 2000s, the powerful military dictated the NSC's decisions on security and foreign policy matters. The ruling Justice and Development Party modified the role of the NSC into a consultative body whose decisions are not binding. Though originally scheduled for Sept. 27, the NSC meeting was rescheduled to serve as a deterrent to the referendum.

The Turkish Council of Ministers is also scheduled to convene Sept. 22 to translate the NSC recommendations into action. Moreover, the Turkish parliament will vote on a motion Sept. 23 to extend the Turkish army's mandate to send troops to northern Iraq.

All these extraordinary meetings of different Turkish state institutions look a bit farcical, as if these institutions are autonomous bodies that debate policies. Yet, they all operate under the strong grip of Erdogan and implement his stances regarding Kurdistan.

Erdogan was the one who announced the change in date for the NSC meeting, and on the day Erdogan departed for the United States, the Turkish military initiated previously unannounced military exercises at the Habur border crossing, which is Turkey’s main gateway to the Kurdistan Region of Iraq. The military exercises sent a signal to Erbil that, in Kurdish leaders' future calculations, they should consider the possibility of a Turkish military move into Kurdistan to suppress Kurdish independence.

Turkish Foreign Minister Mevlut Cavusoglu met with his Iranian and Iraqi counterparts at the United Nations to discuss joint measures to be taken against Erbil. The triangular relationship between Turkey, Iran and Iraq was reminiscent of the ill-fated Baghdad Pact of the 1950s and the Saadabad Pact of 1937, which implicitly united the countries against the Kurds.

Turkey, actually, would be able to suffocate the KRG without resorting to heavy-handed military measures.

Iran’s highest-ranking security official, Ali Shamkhani, had already announced that Iran would shut down its borders with the Kurdistan Regional Government (KRG) if the independence vote passed. Iraqi Prime Minister Haider al-Abadi mentioned that military action against the KRG was possible. Hadi al-Amiri, the commander of the Shiite Popular Mobilization Units in Iraq, made similar threats.

How drastic could the Turkish reaction become?

The long-awaited communique of Turkey's NSC was vague regarding this very question. The most important part of the NSC statement read: “Despite all our warnings, if the referendum is held, then Turkey would preserve its rights that emanate from bilateral and multilateral agreements.”

The communique reiterated previous official statements, referring to the positions of the UN Security Council and the Iraqi central government. It emphasized “that the insistence on holding the referendum would yield severe consequences harming the entire region."

Turkey is holding its cards close to its chest and trying to be as ambiguous as possible so as to leave the door open for different measures against Erbil, from economic pressure to military undertakings.

Turkey is the KRG's main lifeline to the outside world. Turkey, actually, would be able to suffocate the KRG without resorting to heavy-handed military measures. To export its 550,000 barrels of oil per day to the international market, the KRG relies on Turkey. Over 300,000 of those barrels come from Kirkuk oilfields, which fell under KRG control in June 2014. Kurdistan is the third largest market for Turkish goods after Germany and the United Kingdom.

Turkey has the capacity to hurt the KRG economically more than any other political actor. However, it's a two-way street. Ankara — and in particular Erdogan himself — benefits from that economic relationship just as much as Barzani and Erbil.

So long as the Kurdistan Workers Party and its Syrian affiliates are Turkey’s main security threats, to prioritize the KRG would be unwise for Erdogan and the country's security establishment.

Erdogan's fiery rhetoric aside, Turkey has a lot to contemplate when it comes to the upcoming referendum.