Ankara is trying to tell its neighbors something with its massive military exercise across the border from Iraqi Kurdistan as the Kurdish Regional Government's independence referendum nears. 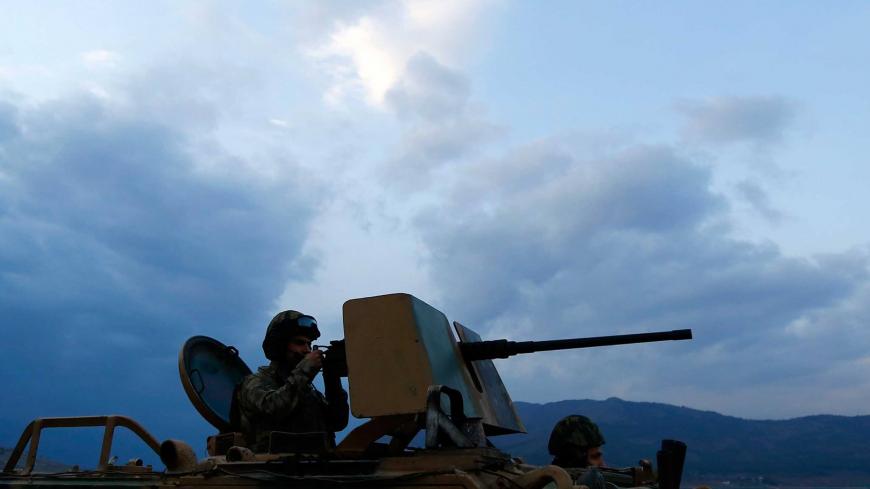 A Turkish soldier on an armoured military vehicle surveys the border line between Turkey and Syria, near the southeastern city of Kilis, Turkey, March 2, 2017. - REUTERS/Murad Sezer

Showcasing large weapons across the street from your neighbor’s driveway is a sure way to get their attention. Turkey did just that with a military exercise across the Habur border crossing with the Kurdistan Regional Government (KRG) of Iraq.

According to Turkey’s state-owned news agency Anadolu, the Turkish Armed Forces launched exercises Sept. 18 outside the town of Silopi, which sits less than 10 kilometers (6 miles) from the intersection of Turkey’s borders with Syria and Iraq. Turkish and international news outlets reported that approximately 100 tanks, armored personnel carriers and self-propelled artilleries are participating in the drill. The timing and venue of the exercises leave little doubt that Ankara is displeased with the Sept. 25 independence referendum in Iraqi Kurdistan.

Defense analyst Arda Mevlutoglu told Al-Monitor in an email interview, “The [Turkish military's] statement underlines that the exercise is being conducted in coordination with the internal security operations in the region. However, such a massive mechanized maneuver is hardly reminiscent of counterterrorism operations: It resembles more of a cross-border incursion. … This exercise can be assessed as a strong message to the KRG before the Sept. 25 referendum.”

Asked whether Ankara is warning the KRG not to hold the referendum or to refrain from unilaterally declaring independence, Mevlutoglu highlighted recent statements by Foreign Minister Mevlut Cavusoglu and President Recep Tayyip Erdogan’s spokesman and senior adviser Ibrahim Kalin. On Sept. 14, Kalin called on the KRG to “backtrack on the referendum mistake.”

Although Turkey is signaling its displeasure to Erbil, a military intervention over the KRG’s legally nonbinding referendum may not be wise or legally justified.

Kurtdarcan said that while “Turkey’s concerns are politically legitimate, using the referendum in the KRG as a legal reason for a military intervention may not be tenable under international law. Use of force is an exceptional option in international law — if not for a UN Security Council resolution or in case of self-defense or a request by the central authority of a country, it is hard to justify.”

He pointed out, however, “If the KRG were to declare independence unilaterally, then the situation would change. In that case, the internationally recognized central authority in Iraq — the central government in Baghdad — could call upon the international community and neighboring countries to help it with an insurgency. Baghdad has that option.”

Kurtdarcan added, “Turkey doesn’t need to be aggressive or belligerent at a time when it has sound legal options. Ankara could tell Baghdad that it could help against Erbil. But if Turkey were to intervene in northern Iraq without a direct request from Baghdad, that would be legally untenable. Things would get more complicated, especially because Turkey was an ally of KRG President Massoud Barzani until recently.”

To be sure, none of this may faze Barzani. As Al-Monitor previously reported, Barzani said in a TV interview on Sept. 9, “Kurds are ready to respond in kind should any party enter [disputed and Kurdish-controlled] Kirkuk by force.” Barzani and other Kurdish leaders have stated repeatedly that neither a military intervention by Turkey or Iran nor the two regional powers’ closing their borders will prevent the Sept. 25 referendum from taking place.

Events on the ground in Iraq are moving at a breakneck pace. Following Iraqi Prime Minister Haider al-Abadi’s request, the Federal Supreme Court of Iraq ordered Iraqi Kurdistan to halt the referendum Sept. 18. According to Reuters, the court “issued an order to stop the procedures of the referendum planned on Sept. 25 … by the Kurdistan regional presidency.” Whether the concerted efforts of Baghdad, regional powers and the international community will change Iraqi Kurdish minds remains to be seen.