The Baghdad government has several legal, economic and military options to prevent the Kurdistan region from conducting an independence referendum that is opposed by most regional and global powers. 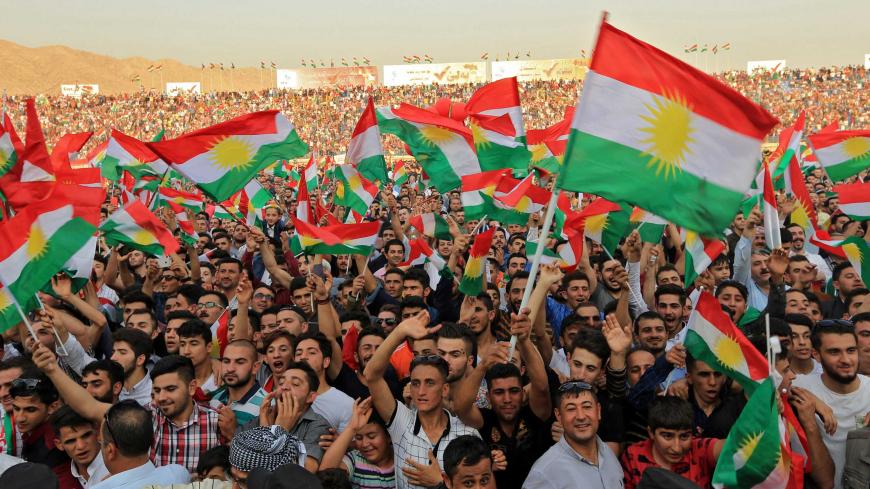 Kurds attend a rally to show their support for the upcoming Sept. 25 independence referendum in Dahuk, Iraq, Sept. 16, 2017. - REUTERS/Ari Jalal

BAGHDAD — Iraq's highest court has ordered a halt to the Sept. 25 Kurdish independence referendum, saying it wants to examine complaints that the vote would be unconstitutional. The Kurds, however, don't appear to be backing down.

The Federal Supreme Court's order Sept. 18 followed a vote Sept. 12 vote by a majority of parliament that rejected the referendum. Parliament issued a decision stating that Prime Minister Haider al-Abadi should take all measures to preserve Iraq's unity and begin a dialogue to address outstanding issues.

Parliamentarian Nazim al-Saadi of the State of Law Coalition described the referendum as contrary to the Iraqi Constitution and the principles of the political process, in which the Kurds are a key player. “The referendum is legally void, which makes the government responsible for preventing it by all means and all powers,” he said.

“The rebellion of the Kurds represents a flagrant threat to security and political stability in the country," Saadi told Al-Monitor. "The Baghdad government has multiple cards it may use to pressure Kurdistan and prevent the referendum.”

Iraqi Kurdistan, an autonomous region in northern Iraq, is led by Kurdistan Regional Government (KRG) President Massoud Barzani. The KRG is based in the city of Erbil, in Erbil province. However, the referendum would include 15 ethnically diverse areas, among them the highly coveted, oil-rich Kirkuk province, which is home to Kurds, Turkmens and Arabs.

Saadi expects the central government to squeeze the KRG by withdrawing contracts for service projects in central and southern Iraq that were awarded to Kurdish companies, which would cause them heavy financial losses. “The government can also put pressure on the province of Kirkuk, which is the gateway to the Kurdistan region, by cutting the salaries of its security forces and staff. All this aims to embarrass Barzani and those who support him and his projects,” he added.

Baghdad seeks to dissolve the Kirkuk local government because of the proposed referendum. Niyazi Mimamr Oglu, a Turkmen parliament member representing Kirkuk, said in a Sept. 15 press statement that parliamentarians' signatures "are being collected on a petition to dissolve the Kirkuk provincial council, declare a state of emergency and appoint a military commander in the event of continued insistence on including this province in the referendum.”

Oglu explained that Baghdad is beginning to reap the benefits of the international rejection of the referendum.

“Baghdad's government will probably ask these countries to cut their support and sever their ties with Kurdistan at the military and economic levels,” he said.

Turkey, Kurdistan’s closest neighbor, is one of those countries. Turkish President Recep Tayyip Erdogan this week reiterated his rejection of the referendum. And Turkey is not alone in believing the referendum is a threat to Iraq’s national security; Iran and the United States share that opinion.

Commenting on this subject, Iraqi parliamentarian Habib al-Tarfi, head of the National Wisdom Movement (Al-Hikmah) bloc, believes the Kurdish threat represents a precedent that exceeds all international standards, and comes in light of critical conditions in the country. He told Al-Monitor, “The mere talk about self-determination and the use of the vocabulary of the alleged independence represent a crime for which Kurdish leaders must be held accountable.”

He wondered how one of the country's components can call for independence while it is represented by the president of the Republic of Iraq, the deputy speaker of parliament and a number of ministers. He disputed Kurds' claims that they have been marginalized in government and he stressed the importance of “activating all means of negotiation and communication to restore national unity among the Iraqi people.”

A Turkmen parliamentarian who spoke with Al-Monitor, Nahla Hababi, called for closing border crossing points in agreement with Turkey and Iran; quickly liberating Hawija province, which is still controlled by the Islamic State; imposing a military presence in Kirkuk; cutting the salaries of Kirkuk state employees; and suspending the disbursement of Kurdish farmers’ funds.

“Talks about independence are just a storm of statements,” she added. “Foreign countries will respond [negatively] to Barzani, his family and supporters, who will bear the consequences of what they are calling for.”

In a parallel movement, Abadi said Sept. 16 that Baghdad is prepared for a military intervention if the Kurdistan independence referendum leads to violence. This escalation comes after a wave of provocative statements by Barzani, who has remained in office even though his presidential term expired in August 2015.

In an interview with BBC, Barzani said, “But if any group wants to change the reality of Kirkuk using force, they should expect that every single Kurd will be ready to fight.”

Commenting on options available for the Iraqi government to respond to calls for the referendum, Kurdish legislator Ardalan Noureddine described the decision of the Iraqi parliament as unjust and unfair, asserting that “Kurdish leaders will appeal the decision before the Federal Court and will reject any attempt to rob the will of the Kurdish people.”

In a telephone interview with Al-Monitor, he said, “The Iraqi parliament decision was issued following internal and external pressures. Instead of solving the crisis, this decision makes this worse. We call on the parliament to make the right decision and resort to the law and the constitution.”

He further added, “Iraq’s parliament has become a parliament for Arabs. The Kurds are not represented in it. The secession decision reverts to the people. We will not renounce our claim."

Regarding another option, submitted by a representative of the United States, Britain and the United Nations to Barzani, Noureddine said, “The alternative proposal is to postpone the referendum in exchange for serious and transparent dialogue with Baghdad under an international guarantee. This would give the Kurds new entitlements, would ensure them a full partnership and resolve all outstanding issues.”

Some observers predict that because going through with the vote could create unpredictable political, security and economic risks, Barzani will wait as long as possible to postpone the referendum as a way to bring the other side to the negotiating table and ensure that Kurds' voices are heard in Baghdad.