What do Iraqi Christians expect from the post-Islamic State era? 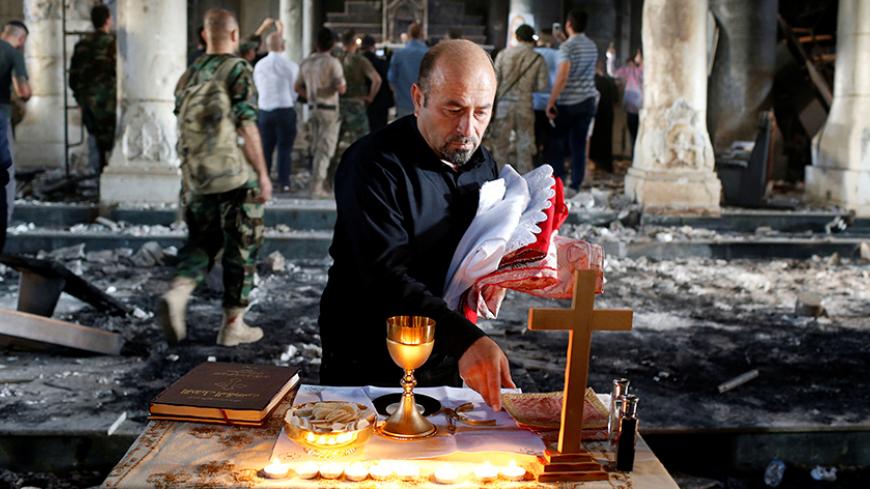 An Iraqi Christian prepares for the first Sunday Mass at the Grand Immaculate Church since it was recaptured from the Islamic State in Qaraqosh, near Mosul, Iraq, Oct. 30, 2016. - REUTERS/Ahmed Jadallah

One of them was Syriac, the other was Chaldean. The Syriac speaks Arabic but understood my conversation with his comrade in English. The Chaldean is a member of the Kurdistan parliament who speaks in perfect, fluent English. Among the three denominations that constitute one of the oldest Christian communities in Mesopotamia, only a representative of the Assyrian community was not present.

Syriacs, Assyrians and Chaldeans are ethnically and linguistically the same people. They take pride in speaking Aramaic, the language Jesus Christ spoke. Generally, they do not like to be asked whether they are Syriac, Assyrian or Chaldean. They insist that they are all the same and that such a question is of a divisive nature.

Nevertheless, I asked and found that one of them is Syriac, belonging to the Orthodox church, and the other one Chaldean, connected to the Vatican.

It was the Syriac who asked me what I consider to be the fate of the Christians in Iraq — whether I think that one of the oldest Christian communities on this earth might perish and be uprooted from their homeland.

On the 12th day of the operation to liberate Mosul, many districts and villages of Ninevah province were freed by the Iraqi army and the Kurdish peshmerga forces of the Kurdistan Regional Government (KRG), who are acting in coordination under the American military baton. Many see US involvement — perhaps a bit over-optimistically — as a hopeful development for unity in Iraq in the post-Islamic State (IS) era.

For the Christian minority residing in its historical homeland — constituting a majority in some parts of it — the future is uncertain. That is why I am asked whether Christians will be able to survive in their homeland.

I responded bluntly: “Look at the situation in Jerusalem and more importantly in Bethlehem, in the birthplace of Jesus Christ. Bethlehem was an overwhelmingly Christian-populated town; now there is hardly a Palestinian Christian living there. Do not forget the fate of the Christians of the Asia Minor, what kind of catastrophe has befallen on them. …”

He interrupted me and spoke about what is happening in Syria and the gradually changing demographics of the Christians in Lebanon. Yet the emphasis, naturally, is on the fate of Iraqi Christians. It is their homeland, and they are not only the indigenous people of the land but one of the oldest — one of those rare communities in the world who have been in living in perpetuity on their land.

Dr. Soory Maqdassy took over the conversation from his compatriot and set forth an Iraqi Christian demand for the post-IS era. He said, “We cannot live as we used to live until IS is eliminated and Mosul is declared liberated. We must have an autonomous region in the Ninevah Plain, in the north and south of it. Now, the north of it with the district center of Bashiqa and settlements such as Bartella, Karakush, etc., are liberated. They were all Christian centers. Only in Bashiqa, half the population were Yazidis, while the other half were Syriacs. The Ninevah Plain, south and north, has been an extraordinary region for all the minority faiths only to be found on the territory of Iraq, from Christians to Sabians, from Shabeks to Yazidis. They lived in coexistence throughout history. However, unfortunately, after 2003 — the so-called liberation of Iraq — both the Baghdad central government and the Kurdish government in Erbil overlooked and undermined us and did not respect minority rights. Iraq is constructed on Shiite, Sunni and Kurdish components, and the product of it has become the cleansing of our population from the Ninevah Plain with the arrival of Daesh [IS] and the declaration of the Islamic state. We cannot trust Baghdad or Erbil anymore. We need to have an autonomous region in the Ninevah Plain, after the liberation of Mosul.”

His Syriac companion, Sami Supania, was nodding to every word Maqdassy uttered as if to emphasize once again the common position of the Christian minority of Iraq.

While some former Christian localities of the Ninevah Plain were liberated by the Iraqi army — such as Bartella — and some by Kurdish peshmerga — such as Bashiqa — the Christian interlocutors are insisting with pride that in the Iraqi army and the peshmerga there are armed Christian units who spearheaded the attack against IS to liberate their towns and villages.

For them, this is an encouraging sign that they can take care of their affairs in terms of the administration and defense of the Ninevah Plain, once IS is removed.

They speak of figures: Since the arrival of IS in 2014, the number of displaced people from the Ninevah Plain grew to around 250,000. Almost 40% of this number has moved to Jordan, Lebanon, Turkey and beyond. The Christians said that nearly 120,000 are ready to return to the towns and villages they evacuated.

I reminded my Christian interlocutors that the operation to liberate Mosul may take weeks and even months and could be very messy and bloody.

For them, repopulating the region does not need to wait for the liberation of the western bank of the Tigris River, where the Arab heart and the city center of Mosul is. They said that if allied forces liberate the eastern bank — which is mainly populated by the Kurds and has a Christian hinterland, the Ninevah Plain — then the Christians will start to return and Christian survival in Iraq will be possible.

With their understandable lack of trust in Muslim Arabs and Kurds alike, they want to rely on what they term “the international system” or “the outside world,” meaning the combination of the United States and the countries of the European Union. In Iraqi Christian eyes, after all, these countries are Christian nations who should be protecting the Iraqi Christians.

There was mention of Article 140 of the Iraqi Constitution, which has not been implemented. Article 140 involves resolving the conflicts pertaining to “the disputed territories” between Baghdad and the Kurds and territories from Sinjar on the Syrian border to Kirkuk and to Khanaqin, relatively close to Baghdad at the Iranian border. The last advances of the Iraqi army and the Kurdish forces with their Christian units in the opening battles of the liberation of Mosul involve “the disputed territories.”

I listened to KRG Prime Minister Nechirvan Barzani in Erbil, who, when the Brookings Institution's Kenneth Pollack asked whether the Kurds would wait for 11 more years to resolve the issue of “the disputed territories” after the liberation of Mosul, responded with an outright “No!”

Barzani implied that Kurds would go on their way if Article 140 is not implemented in the post-IS period.

But now the Iraqi Christians want to enter the field when it comes to the implementation of Article 140 with a demand for Christian autonomy. They say the first step involves normalization — the return of the displaced Christians back to their homes — and then a census, to be followed by an autonomous region to be established for Christians in the Ninevah Plain.

It is a dream they want to make possible. If they cannot succeed, then another tragedy in the Middle East might lie in wait.