Christians in Iraq welcome 2020 with confidence and desire for change 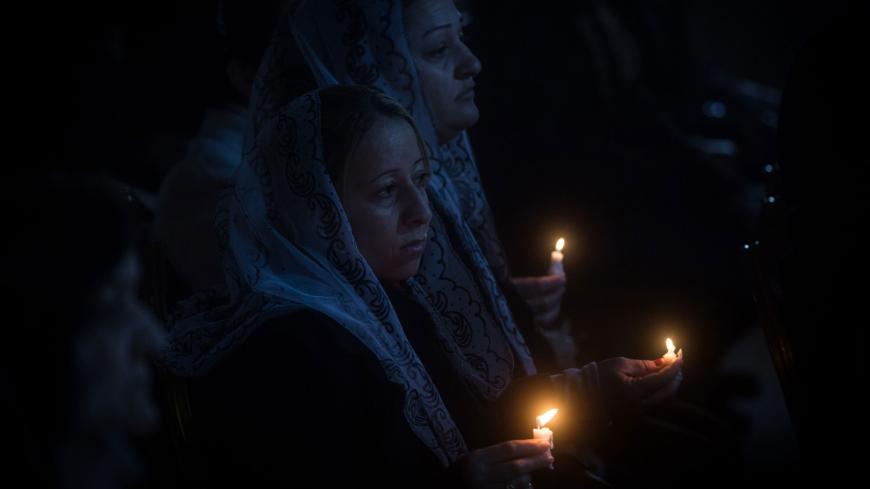 BAGHDAD — In 2021, Iraqis will celebrate the 100th anniversary of the founding of the modern state of Iraq. In light of the current major changes in Iraq, Iraqi Christians feel 2020 will be different. They welcomed the new year with a different spirit and unprecedented optimism.

Bartella is a town with a Syriac majority in the Ninevah Plain, east of Mosul, which has played a prominent role in the history of the Syriac Church. In front of the Mar Korkis Church, Christians have set up a Christmas tree, hung with photos of people killed in the recent protests. At the base of the tree are photos of the security forces members killed during operations to liberate Ninevah from the Islamic State (IS).

​In the eyes of Iraq’s Christians, the war against IS and the recent protests are two critical steps for regaining national identity. The war against IS united Iraqis of different religious affiliations, just as the protests have brought them closer.

Activist Jamil al-Jamil from Un Ponte Per, or A Bridge To, an Italian-based humanitarian organization, said the Christians who visited the Bartella Christmas tree to light candles and pray were like pilgrims visiting a symbol of a homeland that they will be born in 2020.

The optimist of the visitors seemed unprecedentedly high, not limited to encouraging the protests.

Assyrian blogger William Bnyameen, known as Khlapieel, called for changing the name of the Kurdistan region, as he believes the term carries a racist connotation. “Kurdistan,” he said, does not reflect the ethnic and religious diversity of the region. He said “north Iraq region” would be a more neutral designation.

Khlapieel feels Christians will welcome 2020 with more self-confidence and determination to achieve their demands, which would strengthen their presence in the Kurdistan region and the rest of Iraq. “With the golden jubilee of the founding of the modern state of Iraq in 2021 approaching, the fate of Christians in the Middle East will be decided from Iraq," he said. "Either a struggle for our permanent and efficient presence or an exodus from the new Middle East without Christians.”

Mona Yako, a professor of constitutional law at Salahaddin University, attributed Christian optimism to the changes they have been witnessed at the beginning of 2020, as they felt more tolerance in a diverse society.

“From time to time, hate speeches and religious edicts emerged to shake societal peace," she said. "Fatwas were even issued forbidding holiday greetings at times. This made us feel alienated and ostracized. But the solidarity among youths of various religions in Tahrir Square rekindled hope in a national identity that can unite us despite our difference. The New Year celebrations and the Christmas tree in Tahrir Square prove that we are an integral part of the Iraqi people.”

In turn, Louis Raphael I Sako, the Chaldean Catholic patriarch, gave a theological interpretation of the protests, describing them as stemming from “liberation theology.” He told Al-Monitor that the protesters, some of whom were killed and others wounded, are Christ-like in the sacrifices they are making for truth and justice. “It is striking that the main denominator among the young protesters in Iraq and Lebanon is their belief in their land, their homeland, their legitimate rights and their future despite the deep-rooted structural corruption since 2003,” he said.

Sako said the protests are peaceful and in the manner of Christ, who came to this world preaching nonviolence. He further cited the example of Mahatma Gandhi, who peacefully stood up to British colonialism in India, and Nelson Mandela, who fought apartheid in South Africa. “This is exactly what the protesters of Iraq are doing," he said. "They are carrying the Iraqi flag and chanting, ‘We sacrifice our soul and blood for you, Iraq.'"

Sako said the time has come to unite Iraqi Christians under one denomination, which is "the Christian component," rather than using the national designations of Chaldean, Assyrian or Syriac.

He called for establishing a single political grouping that includes all Christians. Iraq “has undergone transformations since 2003 that provided opportunities that Christians failed to seize," he said. "Today, Christians are facing a great challenge to reinforce their presence and role, especially as the country heads toward early elections.”

Sako urged Christian elites to make a self-assessment and assume responsibility for reuniting their ranks. “Christians face fateful challenges,” he said, “most notably the shrinking Christian population due to emigration; the weak political representation, since the major political currents are taking up all the representation quota; the dispersion of the Chaldean, Syriac and Assyrian parties; the demographic change of their historical areas; and the legislation that is unfair to them and to others.”

He added, “It remains crucial to amend the constitution and the personal status laws. These are essential issues for the survival and historical perpetuation of the Christians in Iraq.”

The importance of Sako's call is rooted in deep Christian fragmentation. Iraq is home to 14 different Christian sects, represented by 12 political parties. On top of this, there are five different armed Christian factions. This state of fragmentation remains a stumbling block to form unified Christian political views concerning the future of Iraqi Christians and their relationship to Baghdad and the Kurdistan Regional Government.

Furthermore, his call aims to bring all Christians under one umbrella to form a political alliance of all parties, instead of maintaining a divide between the Christian and national parties.

Sako stressed the need to promote and develop Christian relations with Arabs, Kurds, Turkmens, Yazidis and Mandaeans. “It is necessary to reach an agreement with them on common constitutional concepts related to a fair civil state and the status of indigenous minorities in it, in a manner that preserves their rights,” he said.

He expressed his support for a comprehensive meeting among the various representatives of these components to achieve a sense of nationalism and welcome the new year in a spirit of “unity in diversity.”