The story behind Palestine's canonized nuns

The Vatican has lifted Palestinian spirits with its recognition of the state of Palestine, canonization of two Palestinian nuns and reference to President Mahmoud Abbas as an “angel of peace.” 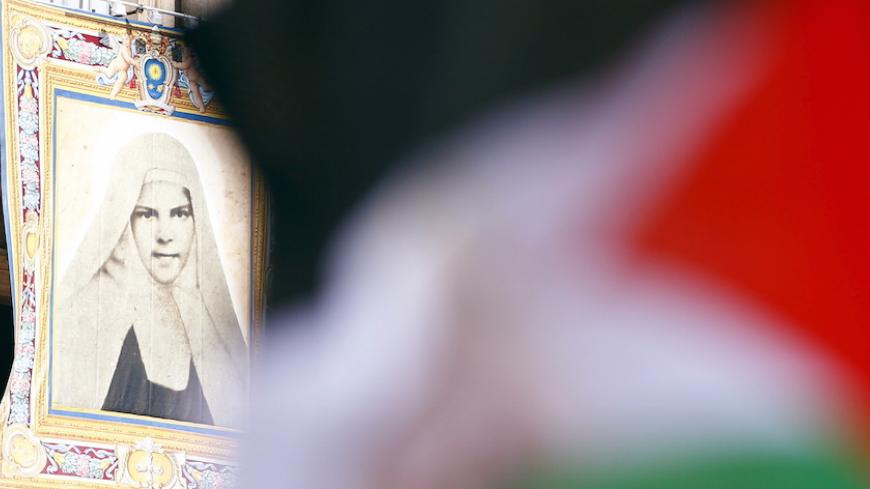 A Palestinian flag waves in front of a tapestry of Mariam Baouardy Haddad before Pope Francis leads a ceremony for the canonization of four nuns at St. Peter's Square in the Vatican City, May 17, 2015. - REUTERS/Tony Gentile

The Vatican gave Palestine three gifts within the span of a few days. On May 13, it recognized Palestine, thereby making the state of Palestine, rather than the Palestine Liberation Organization, its official diplomatic point of reference. The Vatican also ameliorated years of struggle by Palestinians on May 17 by canonizing two Palestinian nuns who were born and served in the 19th century. On the day the nuns were proclaimed saints, Pope Francis referred to the leader of the Palestinian national movement, President Mahmoud Abbas, as an “angel of peace.”

The story of the two nuns has been told repeatedly among Palestinians, passed from generation to generation, but now their narratives are officially part of Catholic Church history, along with those of saints who lived and served with Jesus Christ in Palestine and throughout the world.

Marie-Alphonsine Ghattas was born in 1843 in Jerusalem during Ottoman rule and died there during the British mandate period, in 1927. She is credited with establishing the Rosary Sisters convent, which runs educational and charity projects throughout Palestine and Jordan.

Mariam Baouardy Haddad, born in 1846, in Ibillin, a village in the Galilee, was said to have had mystical powers. While a child, she moved to Egypt, where she later survived an attempt by a fellow servant to kill her when she refused to renounce her faith and convert to Islam. Baouardy Haddad received the name Sister Mariam of Jesus Crucified in 1867. She spent time in India before returning to the Holy Land and founding the Carmelite convent in Bethlehem in 1875, opposite the Church of the Nativity. She died in 1879 at the young age of 33.

Relatives and friends of the nuns from Galilee and Jerusalem and the church have been sharing their stories for years. The Rosary and Carmelite Sisters convents and the education, health and social support services they provide are true testaments to these saints' lives and works.

In an op-ed in the Jordan Times, Issa Kassissieh, Palestine's ambassador to the Holy See, linked the two nuns to the Palestinian cause. “To talk about Sisters Marie-Alphonsine Ghattas and Mariam Baouardy is to talk about the struggle of the Palestinian people to be on their own land, and particularly of the situation of Palestinian Christians. One of the known phrases of the late [President] Yasser Arafat was, ‘There is no Palestine without Christians.’” Kassissieh had previously served as an assistant to the late Palestinian leader Faisal Husseini in the 1980s and 1990s in Jerusalem and as an adviser to Arafat on Christian affairs.

In the short sermon during the canonization ceremony at St. Peter’s Basilica, with thousands from Palestine among the large crowd, Francis contextualized the new saints and sent words of hope to the troubled Arab region. He said to those gathered, “These are two examples from our land that tell us today that the spirit of God is present among us, despite how difficult things are, [including] occupation, suffering, disorder, pain, death and imprisonment. In this time, the time of death, every humble and simple believer can reach sainthood. What these two women were able to do, every person can do before God and fellow humans.” Francis had visited the region in May 2014, and his photo praying at the Israeli-built security wall received worldwide coverage.

The head of the PLO mission to the Vatican will now hold the title of ambassador of Palestine following the signing of the new agreement. The agreement, explained the Osservatore Romano Monsignor Antoine Camilleri, undersecretary for state relations and the Holy See's delegation chief — is the culmination of two earlier agreements signed in October 1994 and February 2000. The initial agreement focused primarily on regulating relations between the Catholic Church and the Palestinians, addressing such issues as freedom of religious practice and protection of church property. The latter agreement focused on tax issues related to the church's work in Palestine.

These earlier agreements were concluded with the PLO, whereas the new agreement is with the state of Palestine, signed by Abbas in his official capacity. Both the Vatican and Palestine hold the status of non-member states at the United Nations.

Israel opposes the agreement between the Vatican and Palestine, although no official was willing to put his name on its rejection. Israeli media outlets quoted a source in the Foreign Ministry as saying that Israel was “disappointed” by the Vatican’s recognition. The Jerusalem Post reported the source as saying that the agreement does not advance the peace process and “moves the Palestinian leadership away from returning to direct bilateral relations.”

The mild Israeli rebuke of the Vatican reflects Israeli concerns about angering the more than 1 billion Catholics around the world. One of those Catholics is US Vice President Joe Biden, who will undoubtedly preside over the joint session of Congress that Francis will address in September.

While the Vatican's recognition of Palestine and canonization of the two nuns raised the political profile of Palestinians, the words of Francis to Abbas provided support for Palestinian efforts toward peace. Whereas former Israeli Foreign Minister Avigdor Liberman last year had described Abbas’ efforts as “diplomatic terrorism,” Francis saw things otherwise, as evidenced by the "angel of peace" moniker. While at the Vatican, Abbas spoke to journalists about Palestinians’ desire for peace, telling them, “We want peace for Palestine, peace which transcends religion.”

Palestinian Christians, only a tiny percentage of whom still live in occupied Palestine, received a major boost with the canonization of two of their own. The public support of the pontiff for Palestine and its people will surely be a source of encouragement and strength.

The three symbolic gifts to the Palestinians from the Catholic Church might not make a dent in Israel's stubborn refusal to end the 48-year occupation, but coupled with other global efforts it could help produce effective international pressure on the new Israeli government. Efforts to expel Israel from FIFA, the world soccer association, along with pressure from the European Union and the United States, might become major catalysts energizing the already active Boycott, Divestment and Sanctions movement around the world.