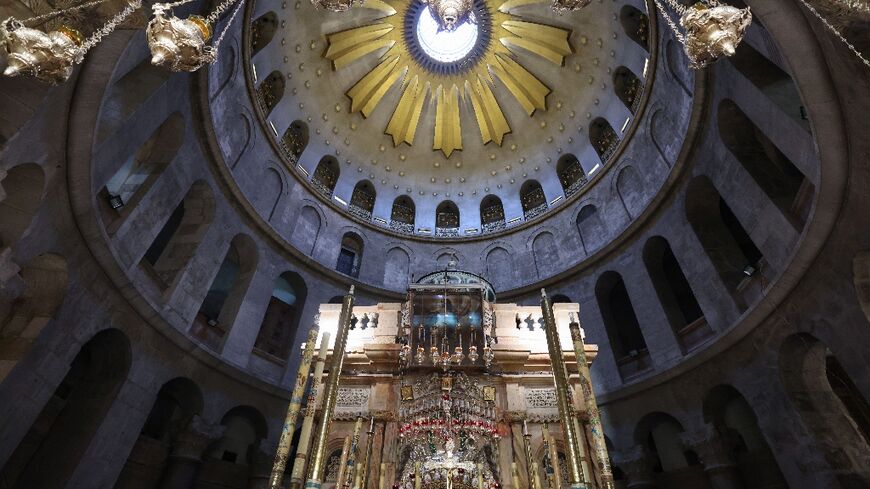 The Church of the Holy Sepulchre in Jerusalem, pictured on April 4, 2021 - Emmanuel DUNAND
by Rosie SCAMMELL
January 1, 2023 — Jerusalem (AFP)

Church bells tolled for the death of ex-pope Benedict XVI in Jerusalem's Old City on Sunday, where Catholics revered their "great" former pontiff.

Standing before the ancient stones of the Church of the Holy Sepulchre, where Christians believe Jesus was buried, seminarian Matteo Sassano said he had been praying for the retired pope, who died on Saturday.

The death of Benedict, nearly a decade after his shock resignation, ends a remarkable era in which he and his successor lived alongside one another within the Vatican walls.

The Holy See's top representative in Jerusalem, Pierbattista Pizzaballa, called for all priests to celebrate a mass for Benedict.

"(We) ask all Churches and monasteries to ring the bells as is our tradition... May the Lord grant him eternal rest!" Pizzaballa wrote.

Jerusalem and the wider Holy Land draw large numbers of pilgrims from among the world's 1.3 billion Catholics.

Veronica Orzelek, 23, said people in her home country of Poland would "absolutely" be in mourning.

The German-born pontiff was seen as "a signature kind of character" in Poland, Orzelek said on the cobbled Saint Francis Street. 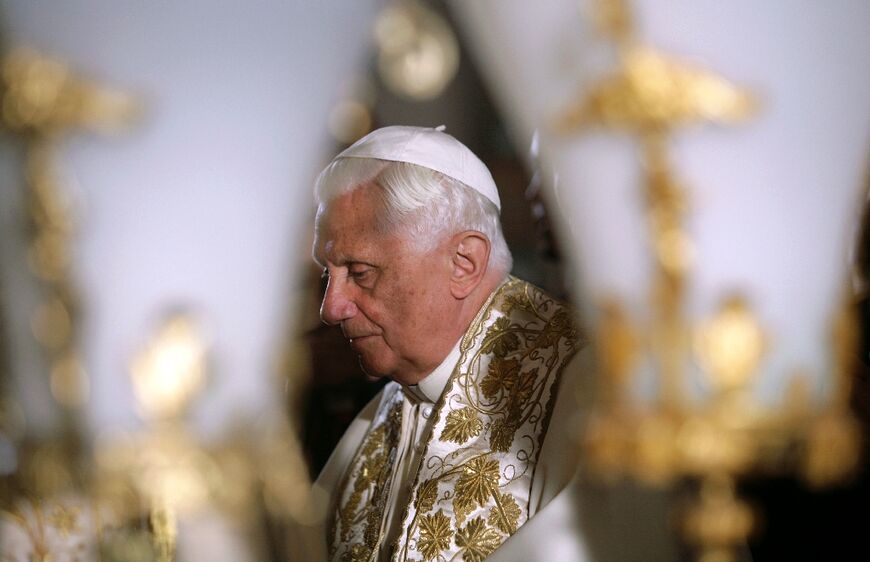 Don Faller, an American visitor, said he "more or less" agreed with Benedict's traditionalist approach which drew criticism from some within the church.

"It's a continuation of old-style Catholicism which is very conservative," said the 65-year-old, praising the late pope as "a peaceful man".

Benedict in 2009 toured the cities of Jerusalem, Bethlehem and Nazareth, which are all home to sacred Christian sites.

While visiting the Church of the Holy Sepulchre, the pope offered his "fraternal encouragement" to the clergy and congregation "who serve the beloved Church in the Holy Land."

The visit was remembered by shopkeeper Tony Quttujan as one which brought Israeli forces to the city's Christian quarter.

"They want to prove that they are protecting the famous people," lamented the 60-year-old, in his ceramics store.

Israel seized east Jerusalem and its Old City in the 1967 Six-Day War.

The late pontiff was described Saturday as a "true friend of the State of Israel and the Jewish people" by Israeli Prime Minister Benjamin Netanyahu.

Palestinian president Mahmud Abbas, meanwhile, praised Benedict for his "support for the freedom and independence of the Palestinian people."

In the heart of the Old City, the sound of priests singing drifted across the courtyard where the Italian seminarian remembered the late pope.

"We will accompany him with prayers," said Sassano.