Israel: The Politics Behind The Armenian Genocide

On the eve of the 98th anniversary of the Armenian genocide, Israel continues denying the event in favor of having better political relations with Turkey, writes Akiva Eldar. 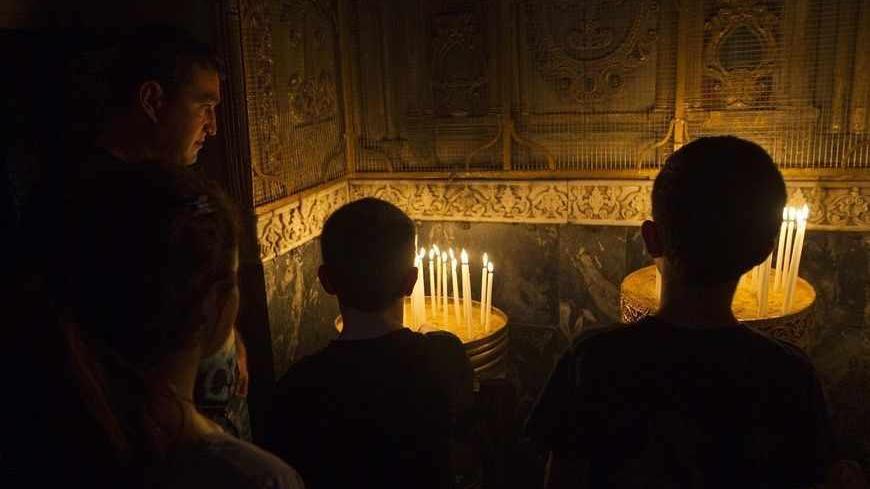 People in the Armenian Church in Jerusalem's Old City light candles during a special prayer on April 24, 2012, marking the anniversary of the mass killings of Armenians in the Ottoman Empire in 1915. - REUTERS/Ronen Zvulun

On Wednesday [April 24] the world will mark the 98th anniversary of the genocide carried out against the Armenians by the Ottoman Empire. As it does every year, this year, too, Israel will be silent. The Jewish state, which just two weeks ago [April 8] honored the 6 million Jews who perished in the Holocaust, will abstain from marking the genocide in which 1 million to 1.5 million Armenians perished. President Shimon Peres, who spoke at the central memorial ceremony at Yad Vashem and pointed a finger at “those who forget and deny the Holocaust,” will continue, as he does every year, to ignore the cruel genocide carried out a quarter of a century before World War II.

When Adolf Hitler was asked how the world would respond to his "Final Solution" plan — the extermination of the Jewish people in Europe — he replied, without compunction: “Who, after all, speaks today of the annihilation of the Armenians?”

Germany speaks today of the annihilation of the Jews, assumes responsibility for the Holocaust, memorializes the victims and compensates the survivors. Turkey not only refuses to recognize the Armenian genocide — its government conducts all-out wars against states that mention the event and punishes governments that grant it official recognition. Only a year and a half ago, Turkey recalled its ambassador from Paris to protest the French parliament’s approval of legislation that criminalizes the denial of the Armenian genocide (several weeks later, the law was repealed).

The 1948 UN Convention on the Prevention and Punishment of Genocide defines genocide as “acts committed with intent to destroy, in whole or in part, a national, ethnic, racial or religious group, as such.”

The man who coined the term genocide and fought for adoption of the treaty was the Jewish-Polish jurist Raphael Lemkin, whose entire family was annihilated in the Holocaust. He himself managed to flee to the United States. Lemkin referred specifically to the Armenian annihilation as an act of genocide. This position was never adopted by Israeli governments. The official Israeli position was summed up in 2001 in an interview by then-Foreign Minister Shimon Peres with the Turkish Daily News: “The Armenians suffered a tragedy,” he said, “but not genocide.”

In advance of the Armenian memorial day someone should point out to the president a compilation of testimony provided by members of Nili (a Jewish spy ring that operated in Palestine during World War I in an effort to help the British army wrest it from the Turks) about what befell the Armenians. He might just change his mind.

This is the testimony of Eitan Belkind, a Nili man who infiltrated the Turkish military:

“I was amazed to see the river colored red with the blood and bodies of decapitated children floating on the water. The sight was horrendous — and we are powerless to help.” Belkind later described how Circassian soldiers ordered the Armenians to gather thorns and thistles and form them into a large pyramid, tied some 5,000 people to each other hand to hand in a ring around the thorn pile and set it on fire. “The fire rose to the sky along with the screams of the wretched people charred to death in the bonfire,” he wrote. “I fled from the place because I could not watch that horrible scene. I urged my horse to gallop with all his might and after a wild two-hour ride I could still hear their miserable cries until their voices died out. Two days later I went back to the place and saw the charred bodies of thousands of human beings.”

In a memorandum submitted to the British Ministry of Defense in 1916, Nili leader Aaron Aaronsohn wrote: “The massacre of the Armenians is a well-planned Turkish action and the Germans were partners in this shameful act.”

These harsh words were echoed at a seminar held on April 11 of this year on the subject of “The Nakba in Israel’s National Memory” (by The Walter Lebach Institute for Jewish-Arab Coexistence through Education and the Tami Steinmetz Center for Peace Research at Tel Aviv University). During the discussion, Professor Yair Auron of the Open University, who for years has been leading a determined struggle for recognition of the Armenian genocide, was sharply critical of the indifference of Israel’s political and academic elite to the tragedies of other nations. Later, in an interview with Al-Monitor, Auron contended that through their indifference, “they are defiling the memory of the Holocaust.”

And, in fact, other than a handful of right- and left-wing politicians, none of the leaders of mainstream Israeli politics showed up. For them, any attempt to hint that other peoples were also persecuted and massacred for racist reasons is considered “disrespect for the Holocaust” (they themselves, on the other hand, often use the term “Holocaust,” especially to scare the Israeli public with the Iranian threat). They do not define the Armenian genocide as a human-Jewish-ethical issue. Israeli universities make do with teaching the Jewish Holocaust and evince no interest in the disasters of other peoples. Nonetheless, at Auron’s instigation, the Open University has for several years been teaching a course on the Armenian genocide, which is much in demand by students.

The recognition of the Armenian genocide by Israeli decision-makers is a question of politics, of the relationship between Israel, Turkey and the United States. Who cares about relations with little Armenia (3 million citizens)? In fact, Israel even earned several million dollars recently, benefiting from the Turkish government’s decision to cancel a weapons deal with France in retaliation for the above-mentioned legislation against denial of the Armenian genocide.

In 2007, the Knesset decided to remove from its daily agenda a proposal by Knesset Member Haim Oron of the Meretz Party to debate the Armenian genocide in the Education and Culture Committee. The decision resulted from orders by then Prime Minister Ehud Olmert and Foreign Minister Tzipi Livni, who feared that further discussion of the issue would lead to a diplomatic crisis between Israel and Turkey.

In a debate that took place in the Knesset five years later (June 12, 2012), over the objections of the diplomatic echelon, the government’s representative, then Minister of Environmental Protection Gilad Erdan, confessed that “this whole debate is taking place against the backdrop of relations between Israel and Turkey.” Nothing has changed.

At the low point of relations with Turkey, following the failed May 2010 Israeli takeover of the flotilla to Gaza which gave birth to the “Marmara Crisis,” some right-wing politicians suggested “punishing” the Turks by recognizing the Armenian genocide. And what would we have done now? Would Prime Minister Netanyahu have repealed the recognition of the Armenian genocide to complement his apology to Turkey over the Marmara? Hearing of that idea, Auron reacts with anger: “As a human being and as a Jew, I am deeply ashamed that an issue of such basic principle and ethics has been turned into a pawn.”

The office of President Peres did not respond to a query by Al-Monitor, asking whether he had changed his mind regarding the genocide of the Armenian people.