Israel's reluctance to embrace lessons of the Holocaust

Against the backdrop of Holocaust Memorial Day, Israelis are debating whether the state should act to defend Syrian citizens from chemical attacks and how it has responded in the past toward genocides and ethnic cleansing. 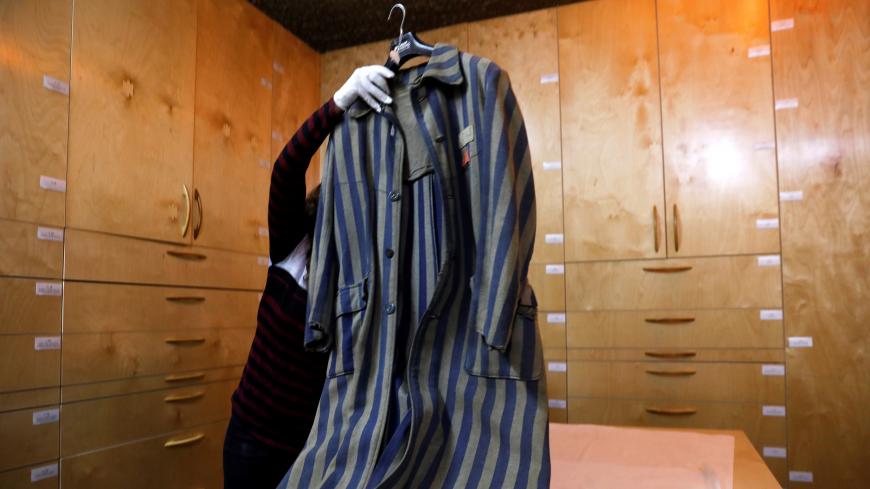 The cruel April 8 chemical attack in Syria attributed to Syrian President Bashar al-Assad nearly coincided with the commemoration in Israel of Holocaust Remembrance Day, which began the evening of April 11. This proximity in timing led many in Israel to call on the state to act in the name of morality and a Jewish obligation not to stand aloof in the face of such horrors. It was in fact impossible to remain indifferent to the terrible photos of dead babies in the Syrian city of Douma that traversed social networks and appeared across Israeli media.

“This, again, shows what we unfortunately already know — a sort of ongoing failure by organizations and apparatuses established by the international community after World War II and the Holocaust to prevent crimes against humanity,” Avner Shalev, chairman of the Yad Vashem Holocaust Memorial Center, said on April 10 at a conference. Shalev called on the world to provide humanitarian aid to the victims and remarked, “[The] shocking sights that we have witnessed, here beyond the border, are enabled and continue as a result of the apathy of the world.”

Israel’s chief Sephardic rabbi, Yitzhak Yosef, went further, calling for real activism on the part of the Jewish state, which he believes has a moral obligation not to remain silent: “As Jews who have experienced a genocide, as Jews whose Torah is a light to the nations, it is our moral obligation to try and stop this murder. It is an obligation no less important than the moral obligation to destroy [the] nuclear reactor in Syria.”

Official Israel discharged its duty with a sharply worded statement of condemnation from the Foreign Ministry, in which it accused the Assad regime of the repeated use of chemical weapons. Aside from that condemnation, Israel did not commit to or threaten to respond to the chemical attack at Douma, appearing to reserve its growing military involvement in Syria to affairs directly concerning sovereignty and security.

In fact, as concerns past incidents of genocide, Israel also did not take active steps, despite its historical and moral obligation as the state of the Jewish people, who experienced the most terrible of horrors of the modern era. Along with the rest of the international community, Israel did not act to save those murdered in Rwanda in 1994, whose horrors were known, or the murdered in Darfur since 2003. The same holds for events in regions geographically closer to Israel, for instance, the systematic murder of the Yazidis by the Islamic State in Iraq. Acts of rape, abuse and murder were reported almost in real time on social media, yet official Israel, like every other nation of the international community, was shocked but did not intervene.

Indeed, the international community, including Israel, has time and again tolerated the murder of civilians, failing to act. In 1948, after the extent of the murder of the Jews by the Nazis was revealed, the United Nations adopted a convention to prevent genocide. Israel joined the convention in 1949, but to little avail.

In actuality, diplomatic considerations and political interests prevent intervention in real time in cases of crimes against humanity. They are also in play in connection to a genocide that took place about a hundred years ago. Israel, for fear of harming relations with Turkey, avoids recognizing the Armenian genocide, which took place during World War I (1915-18). That mass killing along with the Herero and Nama genocide in South West Africa are considered the first of their kind in the twentieth century. Regarding the more well-known Armenian genocide, no one disputes its horrors and scope. According to estimates, between a million and a million and a half Armenians were massacred by the Ottoman regime.

Israel’s refusal to recognize the Armenian genocide is not a source of national or Jewish pride. In 2015, the centennial of the Armenian genocide was commemorated, and debate once again arose in Israel over the question of recognition. In an essay in Haaretz, former Minister Yossi Sarid related how as prime ministers both Shimon Peres and Ehud Barak avoided recognizing the Armenian Holocaust. Sarid, who tried to change this official position, quoted Peres as saying to him, “We should leave the Armenian genocide to the historians.” Even with Israeli-Turkish relations having deteriorated under President Recep Tayyip Erdogan, Israel has not strayed from this policy.

In 2015, Knesset Chair Yuli Edelstein surprised everyone when he declared at a Knesset session marking the 100th anniversary of the Armenian genocide that the time had come for the State of Israel to recognize the episode. Edelstein said of the mass killing, “This is one of the most despicable and most dramatic incidents that happened in the beginning of the last century.” He also noted, “It is no secret that the State of Israel has until now taken an ambivalent stand on the Armenian genocide. A thicket of constraints, diplomatic and other, created a state of affairs in which the Israeli position was too hesitant, too restrained, and as a result, it appears to have diminished the importance of this powerful event.”

Despite these words, Israel has not changed its outlook. A year later, the Knesset Education Committee renewed debate on the issue and recognized the genocide, but the action has no official, diplomatic weight.

In the case of the ethnic cleansing of the Rohingya in Myanmar, Israel did offer humanitarian aid. At the same time, several publications have reported on Israel supposedly supplying weapons to the regime in Myanmar, and Israel did not champion any significant international response to the crisis.

Will Israel act against Syria in response to its use of chemical weapons? The chances are slim. A military response is possible by the United States, which has signaled that it intends to act. President Donald Trump, who recently spoke about withdrawing US troops from Syria, has sounded resolute in recent days and has not spared condemnation or blame toward Assad, whom he called an “animal” in a tweet. There may now be a higher degree of expectation that Israel will respond, given the combination of calls to act in Syria in light of the horrors of Douma, memory of the Holocaust and Israel's security interest in preventing Iran's entrenchment in Syria.