While Egypt's president and his supporters have welcomed the election of Donald Trump, the country's liberals and pro-democracy activists aren't as pleased. 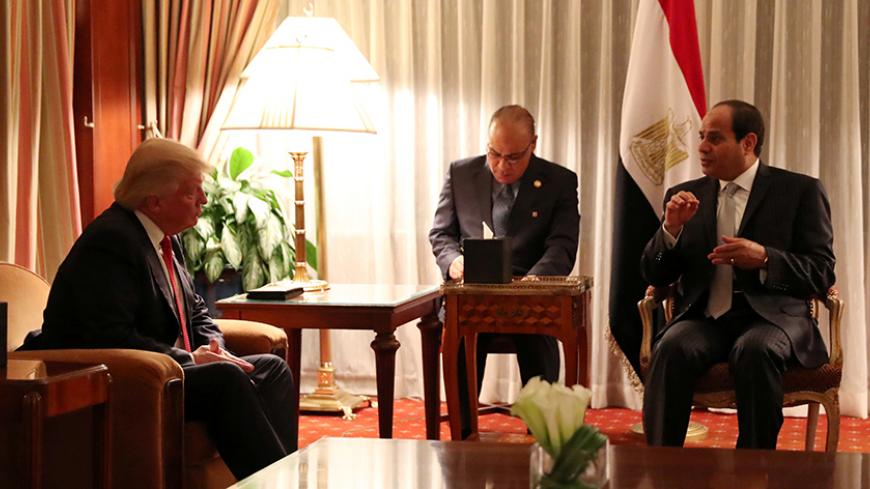 Egyptians received news of Donald Trump’s victory in the US presidential election with mixed reactions, ranging from celebration to disappointment and even outright despair.

While President Abdel Fattah al-Sisi and his supporters welcomed the news of Trump becoming the 45th president of the United States, Egypt’s liberals and pro-democracy activists expressed shock and anguish on social media networks. The widely divergent views on the shocking election outcome reflect the increased polarization in Egyptian society, a society as divided as the American electorate itself.

Sisi was among the first world leaders to congratulate Trump on his win. In a presidential statement released Nov. 10, he said, “Egypt hopes Trump’s presidency will breathe a new spirit into US-Egyptian relations.” Sisi had met the two US presidential hopefuls in New York in September and later said he had no doubt that "Trump would make a strong leader." While Hillary Clinton had raised the issue of human rights and called for the respect of rule of law during her meeting with Sisi, Trump had decided to look the other way. Instead, he told Sisi he looked forward to visiting Egypt and later called the Egyptian president “a fantastic guy.” Trump has in campaign speeches also advocated for torturing terrorists and called for the targeting of their families.

Disregard for human rights is not the only common ground between Trump and Egypt’s strongman. The two men also share similar views on a number of issues, including their stance on the Muslim Brotherhood, which is designated a terrorist group by Egypt and described by Trump as “radical” in a foreign policy speech he gave in New York in June. They have both called for a “war on extremism” and given their blessings to the Russian-led airstrikes on rebel-held positions in Syria. In New York last month, Sisi backed a Russian draft resolution that stopped short of calling for a halt to the devastating bombing of Aleppo, a move that prompted Saudi Arabia to suspend its oil aid to Egypt over the last two months. Similarly, Trump had said in his campaign speeches that backing the rebels in Syria was "a mistake” and “the US would be better off supporting Assad as a hedge against Islamic radicalism.” And while Sisi has pursued warmer ties with Russia, Trump too has expressed willingness to cooperate with Putin, even if it involved a “difficult path.”

Furthermore, both Sisi and Trump have expressed opposition to the Iran deal brokered in July 2015 between the Islamic Republic and the P5+1 group — United States, China, France, Russia, United Kingdom and Germany. Trump has called the deal — which puts limits on Iran’s nuclear program in exchange for sanctions relief — “a disaster” and has vowed to “rip it up.” Meanwhile, a US congressional delegation visiting Egypt in August 2015 later told Israel that Egypt opposed the deal, according to the Jerusalem Post.

The majority of Sisi’s supporters are also celebrating Trump’s election victory. Relieved to see Clinton — whom they believe supported the Muslim Brotherhood’s rise to power — lose the race, many of them have said on Twitter that they see Trump as “the lesser of two evils.”

Margaret Azer, a member of the Egyptian Parliament’s Human Rights Committee, said she was confident that Trump’s win would see a change in US policy vis-a-vis the Middle East. "It’s a new beginning,” she told Al-Masry Al-Youm, adding that she expected a marked improvement in US-Egyptian relations and enhanced US-Egyptian cooperation in fighting terrorism and extremism.

“A Trump victory signals the end of ISIS and other terrorist groups in the region,” Azer said.

Emad Gad, also a lawmaker, has said that “Trump’s victory is in Egypt’s interest as it spells the end of the US administration’s support for the Muslim Brotherhood." It is a view that is common among Sisi supporters and was echoed by former Egyptian first lady Gehan el-Sadat. In a telephone interview broadcast on the privately owned satellite Channel 10 on Wednesday, she said that the American people had elected Trump, a Republican, as a result of Obama’s failed policies. She added that Trump would focus more on domestic affairs rather than continue with Obama’s plan to divide the Middle East. Unlike Obama, Trump considers the Muslim Brotherhood “terrorists,” she said, and then in a sarcastic tone she told the Muslim Brotherhood to "hold a funeral procession for Hillary, your preferred candidate.”

Business tycoon Naguib Sawiris has also been vocal in his support for Trump, describing him as “a successful entrepreneur who has done well for himself” and anticipating that “he will do well for America.”

Ironically, militants waging an insurgency in Sinai against the Egyptian military are in the same camp as Sisi’s supporters regarding Trump’s win, albeit for different reasons. They too struck a celebratory note at the outcome of the US election. “Trump’s winning might be bad for us in the short run. However, it is better for Muslims in the long run as he’ll ruin the US,” prominent Egyptian-born jihadi cleric Tariq Abdel Haleem wrote on Twitter.

In contrast, Egypt’s liberals and pro-democracy activists have expressed disappointment at the outcome of the US election. In an apparent backlash against Sisi and his supporters for their support of Trump, former Vice President Mohamed ElBaradei — who served on an interim basis for one month after the July 3, 2013, overthrow of Islamist President Mohammed Morsi — urged them to fully grasp the statements of Trump and his allies on Islam and Muslims. In the message on his Twitter account, he further exhorted them to “have some self dignity.”

Khaled Dawoud, former spokesman of the liberal Dostour Party, has expressed concern that under Trump the United States will care even less about human rights and that US rhetoric on the need to improve the human rights situation in Egypt will stop — a view echoed by many other Egyptian youth revolutionaries on social media. In a TV interview on the privately owned channel Al Kahera Wal Nas on Wednesday, Dawoud said he expects US-Egyptian relations to be restored to the level they were when George W. Bush was US president — when there was "little focus on democratization in Egypt.”

Meanwhile, Egypt’s media have compared the most recent US election with past elections in Egypt. On Nov. 8, TV talk show host Amr Adeeb poked fun on ONTV at Trump’s allegations of election rigging in favor of rival candidate Clinton. He jokingly asked if Egyptians were supervising the ballot boxes in the United States, in reference to the widespread rigging that often occurs during polls in Egypt. Talk show host Ibrahim Eissa, appearing on Al Kahera Wal Nas on Nov. 9 after the election results were final, told viewers, “This is the democracy our leaders in the Arab world want to deprive us of! Rulers don’t stay longer than their term in office, nor do they change laws to extend their presidency. It is the people that decide! Egypt will not rise without democracy!”

But many ordinary Egyptians, engrossed in their daily lives amid rising inflation and soaring prices of basic commodities, seem to care little about who occupies the Oval Office.

"No matter who is in the White House, US policies vis-a-vis Egypt and the Middle East will remain unchanged,” Ashraf Abdalla, a bus driver, told Al-Monitor.

“The US started the uprisings in the Arab world and will continue to stir more chaos and instability in the region.”