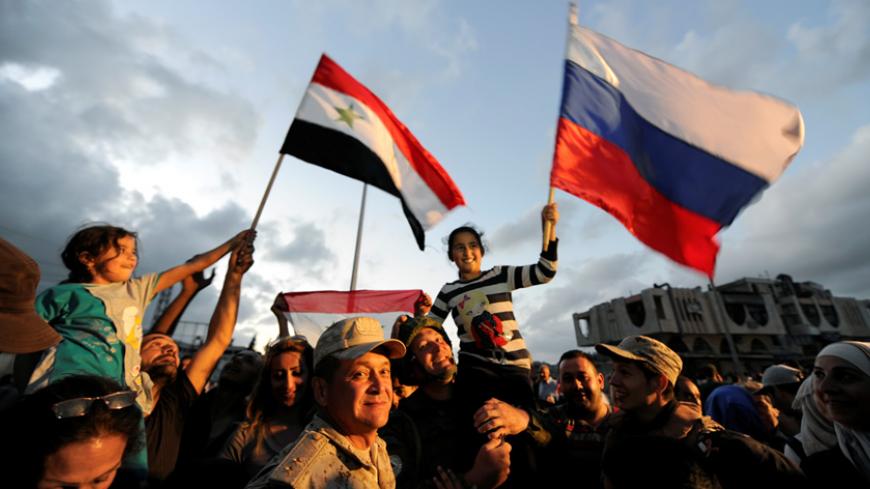 People celebrate carrying Russian and Syrian national flags inside Waer district, after rebel fighters and their families evacuated the besieged Waer district in the central Syrian city of Homs, after an agreement was reached between rebels and Syria's army, Syria, May 21, 2017. - REUTERS/Omar Sanadiki

Hamidreza Azizi explains that the Russian proposal for de-escalation or safe zones in Syria “is not only the best approach for Moscow and Tehran to preserve their core interests in the country, but it could also act as a factor that brings the two countries even closer together.”

Most critical to Iran, according to Azizi, is that the proposal legitimates Iran’s military presence in Syria. “Since one of the key positions of both the Syrian opposition and its foreign backers has been objection to Iran’s military presence in Syria, the international aspect of the May 4 agreement and the fact that it names Iran as one of the peacekeepers could justify the presence of Iranian troops in Syria on the international stage. This is, in fact, the main reason behind the Syrian opposition’s objection to any Iranian role in the process,” Azizi writes.

“By seizing the opportunity to play an active role in establishing and monitoring the de-escalation zones,” Azizi continues, “Tehran could enhance its international posture, proving that, as it has persistently declared, it is genuinely committed to preserving the cease-fire and facilitating the political process. Through this, the path would be paved for Iran to have an active role in any future political process on Syria.”

The de-escalation zones, if effectively implemented, would also preserve Iran’s strategic access to Hezbollah in Lebanon, reduce the military costs of the conflict and provide a check on Turkish actions in Syria, according to Azizi.

“Khamenei views a high turnout as more important than the election of any one candidate, including [Ebrahim] Raisi — a judiciary official who had no experience in government,” Ramezani explains. “Indeed, Khamenei is now in a win-win situation, as the high turnout could suggest that the social popularity of the Islamic Republic is still high decades after the 1979 Islamic Revolution. On the other hand, his seeming support for Raisi helped the conservative candidate form a strong opposition backed by 38% of voters.”

“Moreover, the conservatives — who had failed to reach consensus on a single presidential candidate in past elections — have found a person who is potentially able to lead a far stronger opposition,” Ramezani continues. “The significance of an integrated conservative opposition is better understood when considering that Reformists and moderates already control a majority of seats in parliament. It also should be noted that Reformists swept the city and village council elections, which were held concurrently with the May 19 presidential vote. They gained control of local councils in Tehran and many other major cities, ending longstanding conservative dominance of local politics.”

He adds, “After the release of the results of the presidential elections on May 20, Khamenei hailed in a written message the high turnout as a clear sign that 'Islamic democracy' has strong roots in the country and citizens are deeply interested in ‘this great gift of the Lord.’ Notably, there was no mention of direct congratulations to Rouhani. Instead, Khamenei urged the next administration to take care of Iranian households who are most vulnerable to economic woes."

Attention is focused on Sinjar, where the Iran-backed Iraqi Popular Mobilization Units (PMU) are accused of working with Yazidi groups linked to the Kurdistan Workers Party (PKK), sparking fears of a Turkish military intervention and potentially complicating US and Iraqi military planning for Mosul’s liberation.

Amberin Zaman reports, “The PKK presence in Sinjar dates back to August 2014, when the group rescued thousands of Yazidis under attack by IS. Their precise numbers are unknown, but roughly 400 PKK fighters are thought to be entrenched in Sinjar along with the YBS [Sinjar Resistance Units] and female fighters from YJA Star, a Kurdish all-female militia that is also linked to the PKK.”

“Turkey has long demanded that the PKK withdraw from its foothold in the western part of Mount Sinjar and has threatened military action if it fails to obey,” she continues. “On April 25, Turkey matched its words with action when Turkish jets bombed YBS targets in Sinjar but mistakenly killed five peshmergas from its top Kurdish ally, the Kurdistan Democratic Party (KDP), instead.”

"It was in large part to fend off such land grabs that in December 2015 Turkey deployed hundreds of its special forces to a camp in Bashiqa near Mosul, where Turkish forces were training Sunni Arab fighters loyal to former Ninevah province Gov. Atheel Nujaifi to participate in the battle to liberate Mosul. The move sent Turkish-Iraqi relations into a tailspin but Turkey refuses to budge and, according to Iraqi Kurdish officials who spoke to Al-Monitor on condition of strict anonymity, sent in more special forces in the guise of aid workers but were forced to withdraw them under US pressure.

“In this complex turf war, Turkey appears to enjoy the support of Massoud Barzani, the president of the Iraqi Kurdistan Region who is also the leader of the KDP. Turkish troops provide a counterweight to the PKK and the PMU, who in Barzani’s mind are working together to subvert his plans for independence,” Zaman adds.

Ibrahim Malazada, reporting from Erbil, explains that the Sinjar fault line contributes to tensions between Barzani and Iraqi Prime Minister Haider al-Abadi. Abadi said, “The peshmerga forces are supposed to return to areas along the border of KRG-administered Iraqi Kurdistan that they controlled before the battle to liberate Mosul began last October, while the rest of Ninevah province, including Yazidi areas, is to be liberated by Iraqi forces. Meanwhile, however, the KRG insists on the peshmerga liberating Kurdish areas in northern Iraq, including Yazidi ones. … [R]egional disputes with historical baggage as well as regional interferences point to the difficulty that Erbil and Baghdad will reach mutually acceptable understandings in the future. This makes a military clash between the parties a possibility down the line.”

As for Washington, “The United States has meanwhile weighed in using its influence over Iraqi Prime Minister Haider al-Abadi to get him to withdraw financial support for the YBS. At the same time, it helped persuade Haydar Shesho, the leader of an independent Yazidi militia, to work with the Kurdistan Regional Government (KRG). But Washington has failed to deliver on pledges of financial and other support to Shesho and some of his fighters are now reportedly defecting to the YBS and the Shiite militias. In a further setback, Baghdad is said to have put the YBS back on its payroll,” Zaman reported.

Shahira Amin reports this week on the Egyptian government’s ban on 21 media websites, including Al Jazeera, for supporting terrorism.

The action against Al Jazeera followed false statements about Iran and Israel attributed to the emir of Qatar, Sheikh Tamim bin Hamad Al Thani, which Qatar’s foreign minister has attributed to a hostile media campaign.

Amin writes that while “the majority of the websites blocked by Egypt are pro-Muslim Brotherhood news sites and were either founded by members of the outlawed Islamist group or are funded by Qatar, with which Egypt is at odds over the Gulf state’s sympathetic views toward ousted Islamist President Mohammed Morsi. However, at least one of the blocked websites — the privately owned Mada Masr news platform — is neither linked to Islamists nor sponsored by the “enemy” Gulf state. Mada Masr is an Egyptian independent news portal founded in mid-2013 by a group of liberal journalists who formerly worked for Egypt Independent, an English-language newspaper that closed in April 2013. In a statement released May 25, Mada Masr informed readers that they could access the website ‘through proxies and cached copies,’ defiantly vowing ‘to continue to publish through existing platforms as well as our website.’”