Kurdish political parties have formed various armed forces that are fighting for control of Sinjar, which is still not out of danger from the Islamic State. 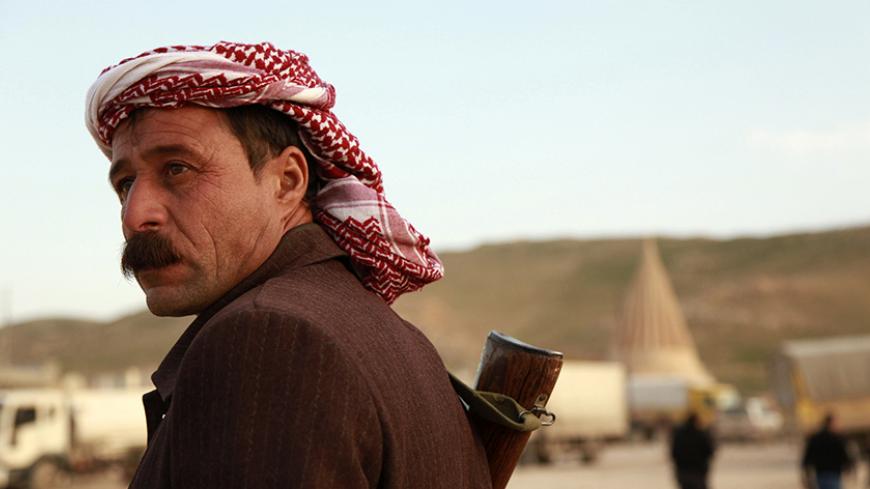 A man from the minority Yazidi sect stands guard at Mount Sinjar, in the town of Sinjar, Dec. 20, 2014. - REUTERS/Ari Jalal

BAGHDAD — Iraqis are calling for the liberation of lands occupied by the Islamic State (IS), but ongoing differences between the parties participating in the liberation operations are obstructing this process. A new conflict recently emerged between forces affiliated with minority groups in Nineveh — including the Yazidis — and Kurdish forces from the Kurdistan Region. This conflict may delay the liberation process of minority areas in the Nineveh Plains.

After IS took over Sinjar in August 2014, Yazidis independently formed a volunteer military force known as the Sinjar Defense Units (HPS) led by Haider Shesho, who came from Germany to lead the liberation efforts. These Yazidi resistance forces even raised their own flag.

However, liberating the city from IS grew more complicated when several political parties vied for influence in Sinjar. While the Patriotic Union of Kurdistan (PUK) made organizational changes in the city — upgrading its affiliate branches there from the administrative to the leadership level — the Kurdistan Democratic Party (KDP) entrusted peshmerga officer Qasim Shesho (no relation to Haider Shesho) with the command of a military brigade presiding over another Yazidi force operating under the umbrella of the peshmerga forces. The other main party in Sinjar — and the most organized one — is the Kurdistan Workers Party (PKK).

Thus, three Yazidi militias emerged struggling not only against IS but also against each other over control of this vital area:

The YBS are part of the PKK and consist of Yazidis from Turkey and Syria. The group has an all-female unit dubbed the Women's Defense Forces.

Civil Yazidi activists in Germany told Al-Monitor on condition of anonymity that a number of European Yazidis, mostly from Germany — the European country with the largest Yazidi community outside Iraq — have joined the YBS. This group of 1,200 fighters was trained by the Kurdish People's Protection Units (YPG) in Syria. Many Yazidi volunteers also undergo training in the Syrian province of Hasaka, according to Yazidi fighters who spoke to Al-Monitor on condition of anonymity.

At the end of 2014, the PKK also established the “Sinjar self-administration unit” and founded the Sinjar Yazidi Council, which is comprised of 27 members representing the displaced Yazidis in the Nowruz refugee camp in Derike, Hasaka province, and in the camps in Turkey and in Mount Sinjar. This council is tasked with setting the foundations for the self-administration of Hasaka.

In January 2015, President Massoud Barzani said that he considers this move a step by the PKK to form a Sinjar canton.

The HPS, the second largest Yazidi armed force, is made up of 5,000 fighters, including 400 women. The leadership of this force maintains ties with the PUK, as HPS leader Haider Shesho is a member of the party.

Yazidi activists in refugee camps told Al-Monitor on condition of anonymity that as a result of the political conflict over the control of Sinjar, Haider Shesho was arrested in early April 2015 by the security services in the Kurdistan Region. The move infuriated Yazidis and set off a wave of denunciations and protests on April 7 in Yazidi cities such as Zakho and in refugee camps in the Kurdistan Region.

The Kurdish Ministry of Peshmerga (KDR) prohibits the formation of any independent military force, as its policy requires that all religious and nationalist armed forces operate under its umbrella and follow its orders. The KDR is angry with Shesho for more than forming a force outside its framework and receiving money from the PUK without the knowledge of the Kurdistan Region. Shesho’s defiance of the Kurdistan Region’s authority went further, setting up an independent administration and flag for Sinjar.

This crisis revealed a political struggle between Kurds and Shiites for influence over these forces in areas that the Kurds believe are an integral part of their regions, while they are subject to the administrative rule of the Iraqi federal government. This crisis also reveals the conflict over Sinjar between the two major Kurdish parties, the PUK and the KDP.

After Shesho's release April 13 as a result of pressure by the PUK, the HPS is still discussing the usefulness of its accession to the KDR.

Saeb Khar, a Yazidi researcher in human rights and civil society, told Al-Monitor that the primary objection is the HPS’ unwillingness to change its name, insisting that dozens of its members were killed while fighting under this name and it must be kept to honor them.

The third armed force, led by Qasim Shesho, operates under the supervision of the peshmerga forces in the lands surrounding Sharaf al-Deen temple shrine, one of the holiest site for Yazidis that IS tried to burn down after invading Sinjar. Qasim Shesho and hundreds of Yazidis strongly defended this shrine, refusing to leave the area even after IS took over Sinjar in August 2014.

In the latest development in this struggle for influence, Barzani announced in an Aug. 3 statement on the occasion of the first anniversary of Sinjar’s invasion that Sinjar was to become a province linked to the Kurdistan Region and shall be handed over to no other authority.

Majed Hassan, a researcher specializing in Yazidi affairs at the University of Bamberg, Germany, told Al-Monitor that Barzani’s statement shows the importance of Sinjar in the future of the political conflict over the leadership of the Kurdistan Region, since there are up to half a million Yazidis in the Kurdistan Region. This is a pull factor for the KDR, which started losing its popular bases in the Kurdistan Region because of competition with other opposition parties, such as the PUK and the Gorran movement, as well as the rise of the influence of Islamic movements in Kurdistan.

Yazidi activist Hossam Salem expressed to Al-Monitor his concern that Sinjar will remain the focus of lasting political conflicts, saying, “Yazidis lost trust in all parties. The federal government failed to provide us with protection when IS invaded Nineveh province, and the government of Nineveh province, too, was unable for years to efficiently and equitably manage the province. The Kurdistan Regional Government is responsible for the withdrawal of the peshmerga forces and their abandonment of Sinjar. This enabled IS to advance and occupy the city and commit unspeakable atrocities.”

There is no way to predict the future of Sinjar until it is liberated from IS, the enemy of all these forces. But in the ongoing struggle for influence, this goal is as far off as ever.