With the Islamic State gone from Sinjar, Kurdish groups battle for control

After Sinjar was liberated from the Islamic State, a new conflict arose among Kurdish parties as to who should administer the area. 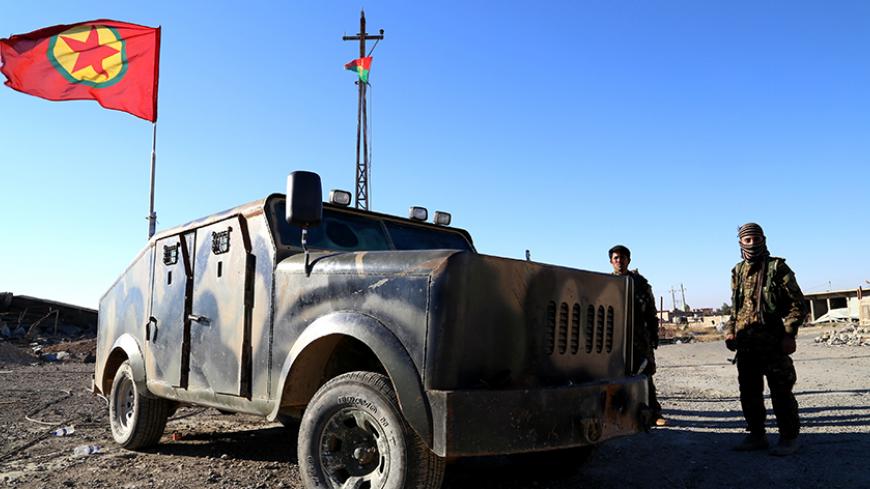 Two members of the PKK-affiliated Yazidi force known as the Sinjar Resistance Units (YBS) stand next to a military vehicle with a PKK flag on top of it, Sinjar, Iraq, Dec. 8, 2015. - Mohammed A. Salih

SINJAR, Iraq — Despite the swift expulsion of the Islamic State from Sinjar in an offensive by Kurdish and Yazidi forces on Nov. 13, assisted by unremitting airstrikes from the US-led coalition, competing interests and agendas present a major challenge to the future stability of the Yazidi-dominated region.

Iraqi Kurdish peshmerga forces were the major driving force of the multipronged offensive, given their large numbers and superior resources such as armored vehicles, tanks and rocket launchers, compared to other forces. As many as 7,500 peshmerga troops took part in the assault, according to the Kurdish Region Security Council on Nov. 11.

That figure included Yazidi battalions headed by Qasim Shesho, a Yazidi leader allied with the Kurdistan Democratic Party (KDP), which is the dominant party in the Kurdistan Regional Government (KRG). Shesho now commands 13 units, each including as many as 400 to 450 fighters, incorporated into the peshmerga ranks, according to Jadaan Darwish, a senior lieutenant to the Yazidi leader.

The rivalries among different forces in Sinjar are primarily manifested in the form of various flags flying high in the area.

The major rival to the peshmerga forces and KDP is the Kurdistan Workers Party (PKK) and its Yazidi and Syrian Kurdish affiliates, respectively known as the Sinjar Resistance Units (YBS) and People's Protection Units (YPG).

Although senior Iraqi-Kurdish political and military leaders alleged the ground leg of the offensive was solely carried out by the peshmerga forces, the PKK, its allies and some smaller Yazidi groups such as the Ezidkhan Protection Force (HPE), played a significant role in forcing IS out of Sinjar.

The PKK and its affiliates had a forward base at the northern entrance of Sinjar right at the foot of the iconic mountain that sheltered thousands of Yazidis from IS in August 2014. After the peshmerga-led offensive got underway, PKK forces started fighting IS inside and outside the town of Sinjar, according to accounts provided to Al-Monitor by several PKK and peshmerga sources.

However, peshmerga commanders told Al-Monitor that retaking Sinjar would have not been possible had it not been because of their forces. They say the PKK and its allies had a presence in parts of the Sinjar area, including the northern entrance of the town, for over a year but had been unable to push IS out of the area on their own.

"The front on the eastern side of Sinjar was the major front of the offensive," claimed Maj. Gen. Ghazi Salih, a peshmerga commander. "But there was no PKK force here."

Despite official claims and counterclaims, multiple accounts from PKK and peshmerga sources point out that some level of coordination and even limited cooperation existed between the two sides.

Sipping tea with his fighters in Sinjar's grain silo where the Kurdistan and PKK flags fly high, Dilsher Harakul, a senior PKK commander in Sinjar, downplays differences with the peshmerga.

"Everywhere we went, we gave our coordinates to the peshmerga [so that they would pass it on to the US-led coalition] so we won't be hit by warplanes," he said on a chilly morning, just a couple of days after the battle of Sinjar.

The PKK has founded the Yazidi force YBS. In total, Harakul told Al-Monitor, there are around 2,000 PKK and YBS fighters in the Sinjar area.

"We offered training to a group of YBS forces," Harakul said. "This was a duty we fulfilled and whoever needs assistance we will help them. We have longstanding experience of warfare, fighting Turkey, Iran, the KDP and the Patriotic Union of Kurdistan (PUK), and now IS as well."

Then suddenly, Harakul left the silo to tend to a confrontation between his forces and the peshmerga a mile away.

PKK-affiliated forces wanted to tow truck a bombed-out IS tank with a bulldozer. But the peshmerga forces armed with armored vehicles and high-caliber machine guns prevented them, saying Sinjar was Iraqi Kurdistan's territory and that they should take the tank.

The standoff continued for a few minutes after Harakul arrived, and turned chaotic as fighters with weapons in hand rushed to the scene.

Harakul and a peshmerga official agreed that the latter will take the tank. In no time, the fighters from both sides smiled as they jointly posed for pictures with their cellphones, a testament to the unpredictable nature of the relationship between the two sides.

A peshmerga officer who fought on the western side of Sinjar also confirmed that some degree of collaboration between the peshmerga and PKK existed.

"In the side where my forces were advancing, there were no PKK fighters with us. But in some areas our forces [peshmerga and PKK affiliates] were together," said the peshmerga officer who commanded a unit of a couple of hundred troops, but did not want to be identified due to the sensitive situation. "There is an understanding between us and there will be no problem, God willing."

Apart from the peshmerga and the PKK, another group that fought during the Sinjar battle was the HPE, previously named the Sinjar Protection Force. The HPE is headed by Haidar Shesho, who is a nephew of Qasim Shesho, but stands at the other end of the political spectrum from his uncle.

Haidar received aid from Baghdad for a few months to become part of the Popular Mobilization Units, which are funded and armed by the Iraqi government and Iran. But Haidar discontinued the cooperation after he was arrested by KDP-affiliated security forces in April. An alliance he later struck with the PKK-backed YBS in November did not last more than a few days, Haidar told Al-Monitor.

Haidar, who has been a leader of the local Yazidi resistance to IS after the group's onslaught in August 2014, said his 3,000 forces are now volunteers without having received any payouts since April.

"We've been promised that our forces would be incorporated into the Ministry of Peshmerga's ranks, but unfortunately that did not happen," Haidar said. "We hope those promises will be implemented."

When IS attacked Sinjar in 2014, peshmerga forces abandoned their positions leading to widespread atrocities against the religious minority by the jihadist organization.

That disaster created a rift between certain segments of the Yazidi community and the KDP, led by Massoud Barzani, whose tenure as the president of the Kurdistan region is currently disputed by some Kurdish factions that say his term has expired.

The KDP had tried to mend fences with the Yazidi community ever since, by assigning a more prominent role and authority to figures such as Qasim.

There are still around a dozen Yazidi districts and villages south of Sinjar in IS hands, but conflicting visions between Kurdish and Yazidi groups as to how to administer post-IS Sinjar are well underway.

During a victory press conference on Nov. 13 near the town of Sinjar, Barzani promised to exert efforts to turn Sinjar into a province inside Iraqi Kurdistan's territory.

"Sinjar has been liberated by peshmerga's blood and is in all respects part of the Kurdistan region," he told reporters from a hill overlooking Sinjar.

Haidar also called for turning Sinjar into a province, hoping this would bring more funding and public projects to the impoverished area.

"Then the people of Sinjar should decide whether they want [their province] to be part of the Kurdistan administration or Baghdad's," he concluded.