Competing factions have different agendas for a post-IS Iraq, paving the way for even greater conflict. 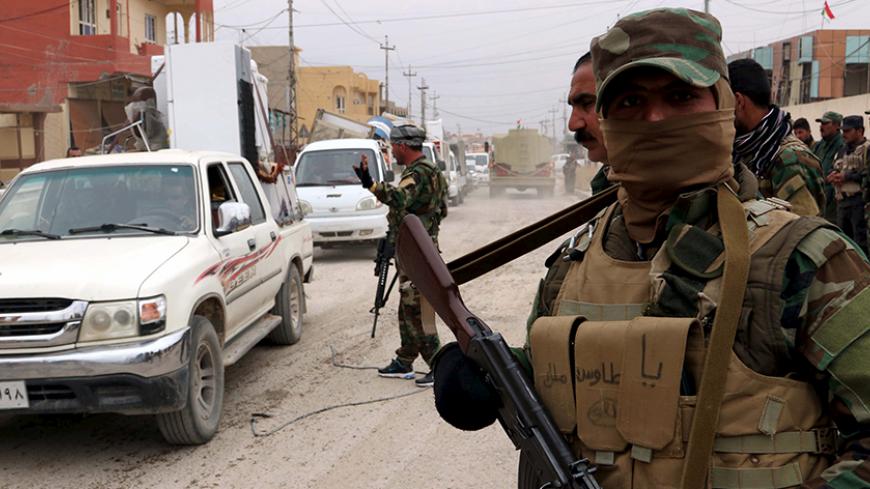 Volunteers from the Yazidi sect who have joined the Kurdish peshmerga forces stand while Yazidi people loot houses in the town of Sinjar, Iraq, Nov. 16, 2015. - REUTERS/Azad Lashkari

Iraq’s most urgent challenge is to eliminate the Islamic State (IS), but that battle will be just a prelude to myriad conflicts in liberated areas such as Sinjar and Tuz Khormato if the rival parties can't reach a consensus on their future status.

The forces that helped liberate the areas — namely the peshmerga, Shiite militias and minority Sunni forces, among others — are already disputing who will control the lands.

Once Sinjar was freed Nov. 12 by various Kurdish and local Yazidi forces, armed and political conflicts ignited between forces of the Kurdistan Workers Party (PKK) and the Kurdistan Regional Government (KRG) peshmerga. The dispute seemed simple enough in the beginning, as Kurdistan, the PKK, Yazidis and others rushed to raise their partisan flags over major government buildings. But that rush prompted Kurdistan Region President Massoud Barzani to say Nov. 13 that only the Kurdistan flag could be raised.

That same day, Haider Shesho, commander of the Protection Force of Sinjar, accused the Kurdish parties involved in the fighting against IS of advancing their factional interests over those of Sinjar.

The current disputes in Sinjar reflect Kurdish internal conflict as well as Turkish influence on the Kurdish situation.

The Barzani-led Kurdistan Democratic Party (KDP), which holds the majority of KRG seats in the Iraqi Kurdistan parliament, has good ties with Turkey's ruling Justice and Development Party, while the PKK is embroiled in an ancient and bloody conflict with the Turkish government in the Kurdish areas of Turkey and Syria. Meanwhile, the Turkish army continues to occasionally bombard PKK positions in Turkey, Iraq and Syria.

Barzani has repeatedly called on the PKK to remove its bases from Iraqi Kurdistan in order to ensure the safety of civilians.

Iraq’s political conflict is strongly linked to the surrounding region. The same applies to Iraqi Kurdistan, as the rise of the PKK is considered a challenge to Barzani at home and a challenge to Turkey in the Kurdish-Turkish conflict.

On another front, clashes erupted Nov. 11 between Kurdish forces and various factions of the Shiite Popular Mobilization Units in Tuz Khormato, in Salahuddin province. Fighters from both parties were kidnapped, killed and wounded. The situation has remained tense, despite mediation by various parties, including the Iraqi government and Iran.

Once again, regional differences were reflected on the internal situation in Tuz Khormato. On Nov. 16, Arshad Salhi, head of the Turkmen Front, accused Kurdish forces of allowing the PKK to be present in their Turkmen-majority city and said that action will result in serious repercussions.

Nevertheless, PKK Cmdr. Sarhad Afrini said the Turkish state, which is hostile to the PKK, is behind those accusations. He said his party is present in the Tuz Khormato district to protect people of various sects from IS threats. He added that his party does not have any sectarian project in areas where it is present.

Problems in the post-IS phase will be more varied and complex than the fighting against IS itself, and solutions will probably be harder to find. The parties involved have diverse and conflicting regional associations. This diversity includes nationalist forces with separatist ambitions, such as the PKK and to a lesser extent Barzani’s KDP; religious forces such as Shiite militias like the Hezbollah Brigades and Asaib Ahl al-Haq that have an ideological alliance with Iran; and zonal factors such as the tribal forces led by Sheikh Ahmed Abu Risha in Anbar province, which have regional ambitions to liberate their areas.

It could be that the real war in Iraq has not even started yet. The moment IS is defeated could mark the start of the comprehensive collapse of Iraqi identity. This is a possibility since the political entities that formed following the 2003 invasion of Iraq — such as the Dawa Party and the Islamic Supreme Council of Iraq — have not succeeded in laying a foundation for unity.

The parties involved agreed to put aside their accumulated differences and conflicts to focus on battling IS. This has created two new challenges. On one hand, some groups’ differences are re-emerging as areas are being liberated. On the other hand, new political and military forces have been formed that did not previously exist or were not as effective as they are today. The various Shiite militias that are fighting against IS under the banner of the Popular Mobilization Units have become a political force, as they seek to participate in elections — which no Iraqi government can ignore in the future, especially when it comes to any potential decision regarding the liberated areas. The Kurdish separatist forces have become stronger and more candid regarding their separatist project. Some minorities have formed military forces to defend themselves in the current and future conflicts.

In this context, a return to the pre-IS status is impossible.

The Iraqi government should focus its efforts on a comprehensive and realistic national reconciliation in which the various Iraqi parties can agree on a single national decision. This reconciliation should include confronting and settling comprehensive details about the future of the liberated areas or the disputed areas to prevent bitter conflicts in the future.