A struggle over flags has emerged in Iraq, where the various forces fighting the Islamic State seek to promote their own identities and are desecrating the symbols of rival groups. 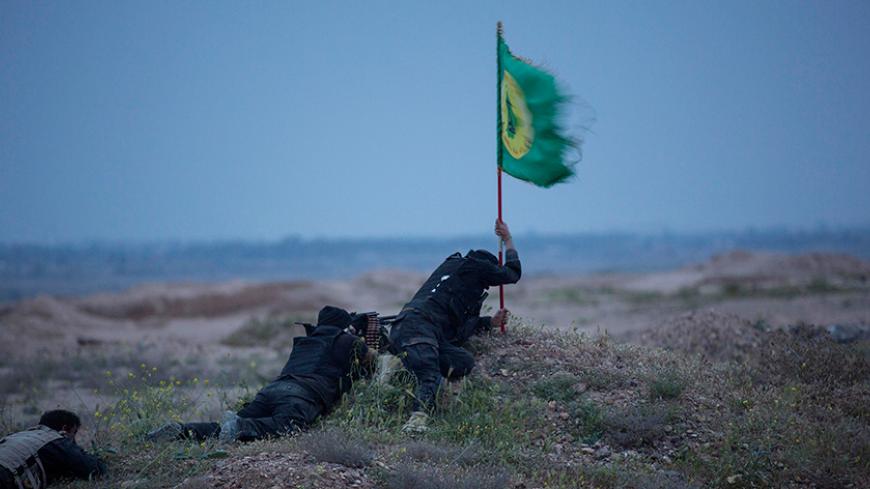 Shiite fighters known as Popular Mobilization Units clash with Islamic State militants as one tries to put a Shiite flag in the ground, in northern Tikrit, March 12, 2015. - REUTERS

BAGHDAD — During periods of social unrest, controversy grows over questions of identity. The struggle over flags in Iraq is a symbolic conflict that reflects a deeper one plaguing Iraqi society, which still has not been able to agree on a national identity that brings together the different religions, tribes and sects.

In Sinjar, the hub of the Yazidi minority, a conflict broke out Nov. 13 among the different Kurdish forces that took part in the fighting to liberate the city from the Islamic State. These forces included the Kurdistan Workers Party, the peshmerga forces of the Kurdistan Region and Yazidi-affiliated local forces. Trouble arose when the various forces wanted to raise their flags at government buildings in the city to symbolize their taking control over the city.

The previous day, conflicts arose in the district of Tuz Khormato between Kurdish peshmerga forces and Shiite forces with the Popular Mobilization Units. As individuals and groups, both sides burned Kurdish and Iraqi flags. Some Kurds posted videos to Facebook of themselves burning the Iraqi flag. Arab groups spread Kurdish flags in the streets and took photos of people burning them and cars running them over.

The newspaper Asharq Al-Awsat reported Nov. 23, “This phenomenon foreshadows the end of the Shiite-Kurdish alliance in Iraq.” This alliance was one of the main factors that led to the overthrow of Saddam Hussein's regime in 2003 and has formed the successive governments that have ruled Iraq to date.

Official bodies in the cities of Baghdad and Karbala insulted and desecrated the Kurdish flag in mid-November, while some Kurdish youths burned the Iraqi flag.

On Nov. 20, former Shiite parliamentarian Izzat Shahbandar said that Kurdistan was no longer a part of Iraq and that the relationship between Arabs and Kurds had become merely neighborly. Kurdish parliamentarian Arafat Akram, from the Movement for Change, said Nov. 22 that some Shiite leaders' statements show that they do not desire to see the Kurdish-Shiite coalition last.

It should be noted that the conflict over flags has not been limited to the Shiite-Kurdish relationship alone. In addition to the internal Kurdish conflict between the different Kurdish forces involved in the liberation of Sinjar, there is also a Kurdish-Turkish conflict in common areas such as Kirkuk and Tuz Khormato, where flag-burning campaigns have become common.

Other military forces participating in the fight against IS, including forces affiliated with the Popular Mobilization Units — such Asaib Ahl al-Haq and the Hezbollah Brigades, among others — have their own flags that they raise both in the liberated areas and on the battlefronts.

The raising of these various flags spotlights specific religious and sectarian symbols that do not belong to the Iraqi people as a whole. Their proliferation works against the idea of national belonging expressed by one Iraqi flag.

In this vein, cleric Ayatollah Bashir al-Najafi has repeatedly criticized the raising of flags other than the Iraqi one on the battlefield. On Aug. 15, 2014, he called on all factions to commit to fighting IS under one Iraqi flag.

The flag issue in Iraq is an old one, and has been the subject of disputes between Iraqis since the beginning of the creation of modern Iraq in 1921. Ever since then, the flag has been repeatedly changed as the successive regimes that ruled Iraq failed to agree on a single identity bringing together all Iraqis.

During the monarchy period, the Iraqi flag represented Arab nationalism, and then came the Hashemi Union between Iraq and Jordan in 1958, when the two countries were ruled by kings of the Hashemite royal family.

The flag was subsequently changed in the era of Prime Minister Abdul Karim Qasim in 1959 to represent the left-leaning revolution. It changed again during the Baath reign in 1963 to represent the Baath Party's ideology and display the three stars of the Baath motto of unity, freedom and socialism.

Saddam then changed it following the Iraqi invasion of Kuwait in 1991 to read “God is great” as he conducted a religious campaign to attract the support of religious groups and stir religious feelings among Muslims to that end.

The debate over the new Iraqi flag continued among political partners after 2003, and none of the proposals that could have allowed the Iraqi flag to represent Iraq in a comprehensive way have been adopted. On Sept. 29, 2008, 250 different designs were submitted to the parliament.

Decision-makers eventually settled on removing the stars that represented the Baath Party and changing how “God is great” is written on the flag, appeasing the Kurdistan Regional Government, which had refrained from using the flag in consideration of the massacres under the Baathist reign.

The flag is one of the unexpected but central issues that the Iraqi government must deal with through educational programs and cultural works within the project of comprehensive and long-term national reconciliation.