The Popular Mobilization Units is involved in military operations in Yazidi areas of northern Iraq, angering peshmerga, who argue that the PMU is not allowed to do so by an agreement between Erbil and Baghdad. 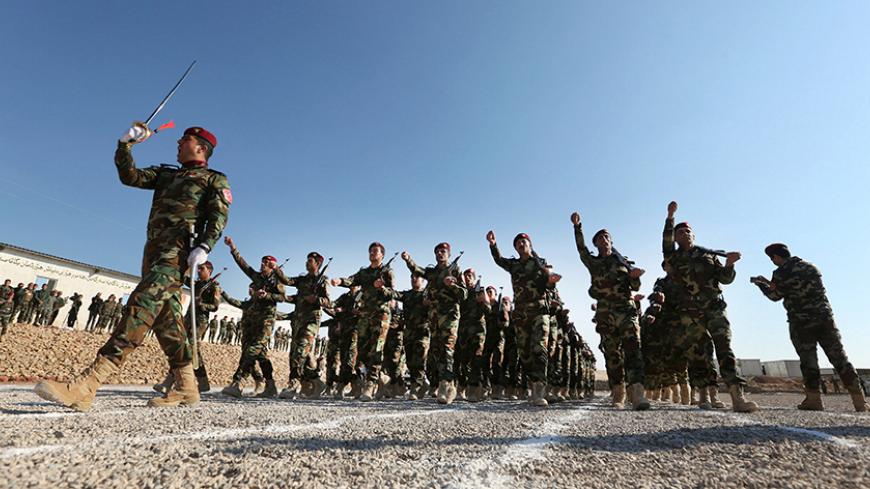 A group of Arab soldiers who have joined Kurdish peshmerga forces take part in their graduation ceremony at a training camp in Duhok province, Iraq, Feb. 7, 2017. - REUTERS/Ari Jalal

ERBIL, Iraq — Amid fierce fighting pitting Iraqi forces against the Islamic State (IS) over Mosul, in Ninevah province, tensions have risen between the predominantly Shiite Popular Mobilization Units (PMU) and Kurdish peshmerga. On May 23, the Committee on Kurdish Areas Outside the Region, an official entity in the Kurdistan Regional Government (KRG), called PMU activity in Sinjar suspicious, based on the force not coordinating with the peshmerga in the area, which is close to Iraqi Kurdistan and among the territory over which Baghdad and Erbil have had disputes about control.

The PMU on May 13 had launched an operation to liberate the district of Sinjar and surrounding villages from IS. On May 23, PMU fighters took Qayrawan, which is administratively part of Sinjar but not far from Iraqi Kurdistan. After the battle for Qayrawan, dozens of members of the Yazidi peshmerga, including military officers, deserted ranks to join the Baghdad-supported PMU.

Serbest Leskin, a peshmerga official in Sinjar, told Rudaw Net on May 14, “We told the PMU that they were not allowed to enter the Yazidi areas, but here they are today surrounding the Yazidi-affiliated Tal al-Qasab and Tal al-Banat. When we learned that they had changed their plans, we immediately informed President [Massoud] Barzani.” That same day, Barzani had instructed peshmerga leaders not to allow the PMU to enter Yazidi areas in Sinjar.

According to press statements by a Kurdish source reported on by Rudaw News, Baghdad and Erbil had agreed that the Iraqi army and the PMU would not enter Kurdish areas. Leskin stressed that the agreement bars the PMU from areas populated by Yazidis, whom the KRG argues are ethnically Kurdish. Regardless, the PMU took and continue to control Tal al-Qasab and Tal al-Banat and argues that it must be able to operate anywhere in Baghdad-controlled areas, which would include Qayrawan and other Yazidi areas outside Iraqi Kurdistan.

A statement by Iraqi Prime Minister Haider al-Abadi in his weekly press conference on May 16 appeared to indicate that the sides had agreed not to engage in infighting and instead to focus on battling IS. Abadi announced, “We have agreed with the Kurdistan Regional Government on the peshmerga’s positions being limited to what they were before the start of the battle to liberate Ninevah, and our forces will carry out the operation. The text of that agreement still holds.”

Despite this agreement, the two sides still hold different points of view. According to Abadi's assertion, the peshmerga forces are supposed to return to areas along the border of KRG-administered Iraqi Kurdistan that they controlled before the battle to liberate Mosul began last October, while the rest of Nineveh province, including Yazidi areas, is to be liberated by Iraqi forces. Meanwhile, however, the KRG insists on the peshmerga liberating Kurdish areas in northern Iraq, including Yazidi ones.

On May 15, PMU spokesman Ahmed al-Asadi confirmed coordination between the PMU and peshmerga leaderships, but said the PMU does not respond to statements the media claims Barzani has made.

On May 14, the second day of the operation to liberate Qayrawan, west of Mosul, PMU leaders stressed that they would not allow “cutting off any part of Mosul,” noting that removing peshmerga from Mosul would be “easier than expelling IS.”

Al-Monitor tried, to no avail, to contact Asadi for comment on this PMU position. One PMU leader told Al-Monitor on the condition of anonymity, “I urge our brothers in the peshmerga leadership to know their limits and respect that we are waging a fierce war against IS.”

Some claim the PMU in the area, consisting of militias backed by Iran, is heading toward Sinjar with the purpose of connecting Iraqi and Syrian territory and opening a pathway for Shiite fighters to safely cross over into Syria, hence the aversion to peshmerga involvement there. Leskin, in Rudaw Net, alleged this, asserting, “The support of the Kurdistan Workers Party [PKK] forces in Sinjar by Iran and Shiite fighters in Iraq all serve this purpose. Iran has already begun to implement this plan through the PMU, located 60 kilometers [37 miles] away from the border with Syria.”

Al-Monitor contacted Zardasht Shingali, the spokesman for the Sinjar Resistance Units (YBS), who denied any association by the YBS with the PKK in Sinjar, and hence with Iran. “We are here to protect our people [Yazidis] in Sinjar,” Shingali said. “The fact that Iraqi forces have arrived at the Syrian border is their business. However, we will not accept any Iraqi forces between Sinjar and Syrian Kurdistan. If the PMU were to reach the borders through [the mixed area of] al-Baaj, again, it’s their business. We do not intervene.”

Hussein Al-Alawi, a professor of national security at Al Nahrain University, told Al-Monitor, “After Fayyad’s visit, an understanding over military operations was reached. The confusion was overcome and the crisis was resolved. However, due to regional interference and the sensitivity of the situation in the region, some bickering through the media might occur, but there will not be a direct confrontation.”

Although signs indicate that the dispute over Sinjar has been resolved, regional disputes with historical baggage as well as regional interferences point to the difficulty that Erbil and Baghdad will reach mutually acceptable understandings in the future. This makes a military clash between the parties a possibility down the line.